An interesting point about direction 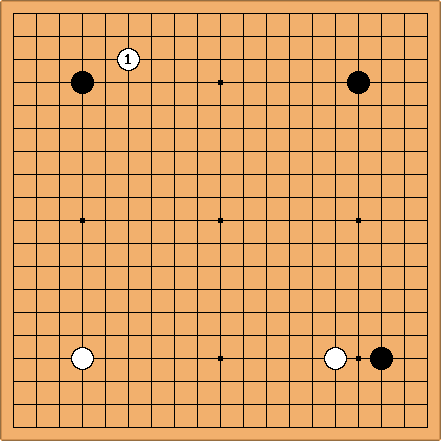 At the London Open last weekend I got an interesting comment on one of my games from Seong-June Kim (6 dan). I was Black and my opponent approached at

. The comment was that this was in the wrong direction. 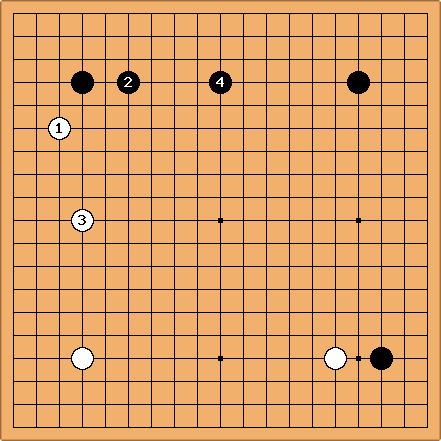 The natural development is for White to approach on the other side like this and Black to respond.

All White's stones seem to be working well together here, as are Black's.

Can Black do anything about White's 'mistake'? Seong-June recommended this diagram. (sequence 1-a)

This leads to the situation below. 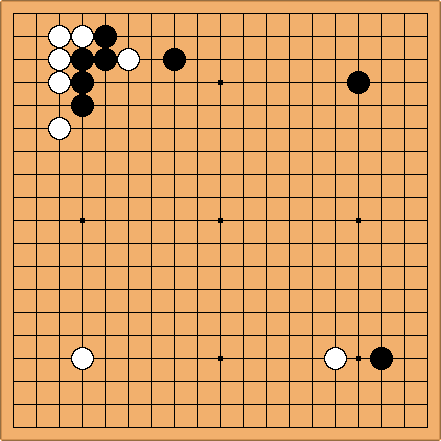 Now Black has a nice formation across the top, and sente.

Nothing earth-shattering, but I thought that this was interesting.

I think that the line given makes the huge assumption that White would go into the 3-3 point in answer to the pincer. That is not so terrible, but the counter-pincer is also conceivable and there is also the ikken tobi to consider (see also Changing Fuseki Dogmas) How does the fact that White has approached high in the lower right affect this? -- Simon Goss

The general idea is approaching from the open side. Kobayashi Satoru no less introduced the "wrong" approach move in nirensei v nirensei a few years back.

Simon's point about other joseki (rather than 3-3 invasion) after the one-space low pincer can be contrasted with a Michael Redmond remark in Go World about a closely related position, that "in practice you invade". -- Charles Matthews

Now there are plenty of other ways of playing, and no-one can say that they are better or worse than these. But what can be said, based on large numbers of games by expert players, is that these are very good formations to make with three stones.

Furthermore, they aim to do various things in future. Similarly, there are other things that are known to be good: playing first in an empty corner, making an enclosure, approaching a 3-4 stone, extending from an enclosure, pincering, ... And these moves also, mostly, have various aims.

Hmm. I don't think I am doing a very good job of explaining this. One final attempt. The attitude I favour is

"Someone told me that this was a good thing to do because it aims at that next, so I am going to try it in some of my games to see if I agree."

and an attitude I do not sympathise with is

"No-one can prove to me that this move is wrong, and anyway it won't lose more than a few points, so I am going to play this."

Perhaps another key point is "Have a plan", though Pieter Mioch says: do not have a plan. See Controversial Statements. 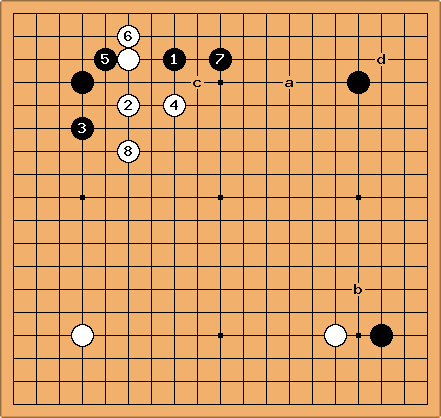 What about this alternative from Ishida vol. 3? He gives it as a leisurely approach when White is reluctant to enter at the 3-3 point. In this position if Black links up the upper side with a play around a, White gets the first play in the lower right (b perhaps?). Both the 3-3 points on the upper side are still open and White seems to be dictating the course of the game more than Black despite choosing the 'leisurely' line.

I think that Black could put more pressure on White from further away in this case - with a three-space pincer (7 in the diagram) for example.

Jonathan Cano: I thought the recent (i.e. last 5 years) fashion was to play the joseki that begins with 4 at c. White gets center influence while Black gets territory on top. White frequently follows up with an invasion at d.

DaveSigaty: In the case where Black has a stone on the 4-4 point in the upper right this joseki doesn't work well. After the usual pushing match along the top,

puts Black on the spot by making miai of a and b. This joseki is usually played when White has the upper right 4-4 point rather than Black. This is discussed in Chapter 4 of Kajiwara's "The Direction of Play" (although in reference to the approach to a 3-4 stone in the upper left rather than 4-4). He played out the normal joseki(!) but blames himself quite a lot and actually spends 12 pages explaining what he should have done instead.

, she has to be prepared for Black to choose something other than the usual pushing out along the top. Perhaps the most frightening possibility is the push and cut with

. Although this is often thought of as an overplay it is certainly a possibility backed up by the marked black stone.

There are a lot of possible variations that will present opportunities for White to slip up. A quiet line for both sides here would be for Black to capture at

followed by White connecting underneath with

. But this would leave a white wall facing Black's stone in the upper right. So instead Black throws in

. This makes miai of pulling out the ladder stone with a in order to attack the three white stones in the center or playing atari at b and d then connecting at e and chasing an even bigger lump of white stones, while also building up a territory along the upper right.

BillSpight: It is true that the kakari from the top allows Black to make a Dual Purpose Play combining a pincer and an extension. There are other possibilities than the one-space low pincer. I like the three-space pincer, myself.
However, to call that approach a mistake seems a bit doctrinaire to me. The more natural development leads to a fairly simple fuseki, which is relatively easy to play for Black. The kakari from the top avoids that.
But there is an easier, and perhaps better way to avoid that, as well: a wedge. 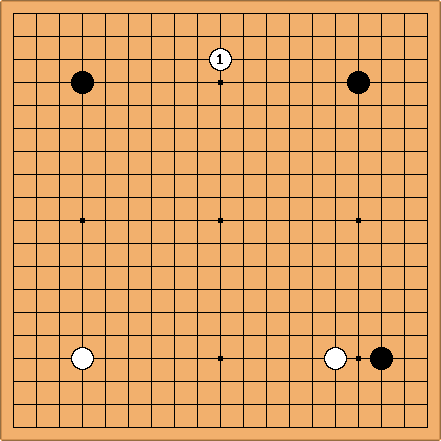