Miai strategy means playing so as to leave your opponent with a miai situation. Whatever option he chooses leaves you with an equally good option (or one that is only slightly worse). It is related to the concept of tedomari.

See Miai in the Fuseki.

John Fairbairn Intriguing. I would have said playing so as to leave *yourself* with the options. I wonder whether there's a practical difference depending on whether you view it as him, me or both.

Rich: This seems confusing to me, too; while you're leaving your options open until later to decide which is the best play for yourself, you're doing exactly the same for your opponent too. It's an interesting idea, but how does it work well in practice?

HolIgor: There should not be a page on SL without a diagram. 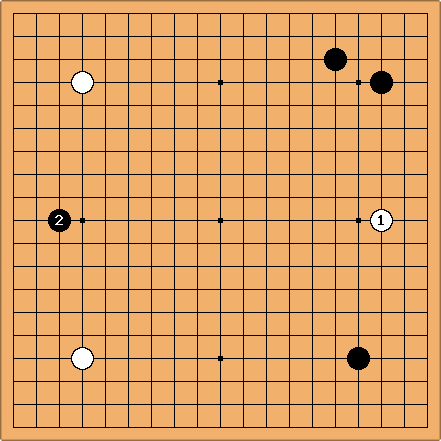 In this basic situation it is difficult for black to decide from which side to press on the right. Black waits playing

, for example. White can make a choice herself and play on the right, but does white know what direction is better?

Dave: Unfortunately this is not a good example. Black most often plays on the left not because the choice on the right is unclear but because it is gote. On the right, Black always approaches from the top if he continues there now. I could not find any examples of an approach from the bottom. Similarly, if Black plays on the left first then White on the right more frequently extends toward the top than the bottom by nearly 10 to 1.

Harleqin: In fact, black can approach from below on the right side[1]. But I agree that the situation on the right is not exactly miai, since white can approach the lower right corner to which black will usually (imho) want to respond instead of playing the extension above, thus giving white the chance to play both extensions.

Bill: Rich, I play a fairly miai-ish game. Let me comment about my own approach to miai as a strategy. The point is not to go around making miai. Mainly it is to get the last big play somewhere, leaving smaller plays to be divided up between the two players. Often there are a couple of plays you would like to play, but each has a defect. The answer may be to make a third play that cures both defects, leaving each option miai. In general, the answer to a dilemma may be none of the above, taking profit while reducing the urgency of the dilemma.

Rich: Thanks for the comments... reflecting on it last night, I realised how early in the game I use miai plays to gain speed and power - my first or second move is usually on a 4-4 point. In that light, it seemed a lot clearer.

A better example of Miai Strategy? 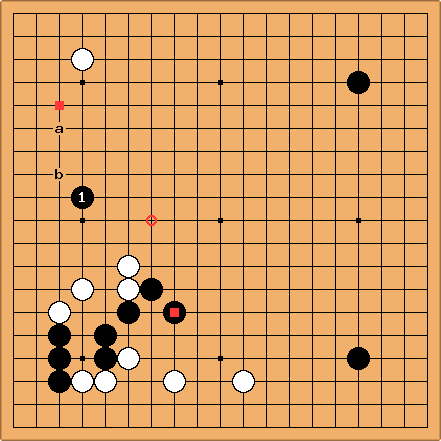 From The Direction of Play.

makes miai of black taking either

to settle on the side, pressure the upper left corner and devalue white's wall. Kajiwara calls the natural seeming play of

at a inferior since after white answers at b, black doesn't have a good continuation. In contrast, by applying the miai strategy of

, black guarantees himself a coherent whole-board strategy and white is left to pick her poison.

Also, is miai *strategy* the right phrase? Just playing to leave miai seems something of a barren plan - the options remain for both players. Is it not the case that there has to be a higher goal, the true strategy, and that leaving miai is just a *tactic* to ensure that the strategy is implemented without too much collateral damage? Shuei is supposed to be the master of this, but I confess that I have never found it easy to see what he's up to.

Bill: Well, you are leaving yourself an option, even if your opponent takes one. :-)

Charles Makes sense to me, as a simple-minded explanation of amashi. If you play always to leave good defensive plays as miai, your opponent can play a number of attacking plays (as it seems) but you slip away from the pressure each time.

BobMcGuigan: Occasionally you see a player getting praise for maneuvering to play both points of a miai situation. It seems that miai options aren't always available. Sometimes I find it hard to believe that miai points are really equal in value. It must be an approximate thing, dependent on the fluid whole-board development. What once were miai points might no longer be such at a later time in the game.

Charles Well, that must be right and close games must often be about nuances 'breaking the symmetry' of exact miai.

Bill: It seems to me that if somebody gets both of two miai points, in most cases somebody has made an error, either in the play or in the assessement of miai.

Miai strategy is considered quite subtle, but historical examples are typically viewed as slow. The ultimate miai strategy, OC, is to play tengen at move 1. The statistics with komi seem to be against that play, however.

A. Leave the opponent with NO good reply.

B. Leave the opponent with a forced reply which eventually gives you some good follow ups.

C. Leave the opponent a choice between two plays that will eventually give you good follow ups.

Quite far down the list. Bad plays which your opponent can reply strongly against.

Then plays which your opponent can outright exploit.

Near the bottom, plays which don't accomplish anything.

At the bottom, kill yourself in gote.

Hu: One strategic use of miai is to allow a weakish formation to attack or develop more than it might otherwise. If a formation can either escape when attacked one way or form two eyes when attacked another way, then it can itself be used to attack even though it might not yet have two eyes. The miai concept can be extended to more than two options. In a sense, miai strategy and flexibility might be the essence of Go. 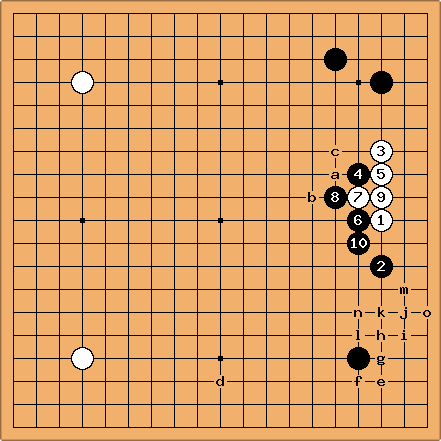 from below. I labelled the moves from 11 onward with a etc. to keep it to one diagram.

Dave: Maybe you could post your examples. I can not find any professional games that follow this approach.

Harleqin: On gobase you can find two games where black has a high shimari instead of the low shimari shown here:

Afterwards this pattern has been experimented with by some Koreans, but I have no further records. However, if you just restrict the search to the approach (without further moves) you find quite a list.