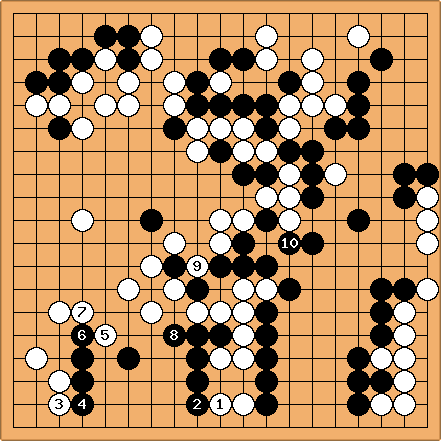 Dave White 139 In yose there is less need to worry about ideas like empty triangles. But did you notice that it is an invitation for White to capture at 139 :-)

mat Wouldn't other moves have been an invitation to invade my territory on the lower side?

If you played 139 yourself it would make 138 later absolute sente (threatening to cut off my stones). I would probably play 138 myself but then you would naturally block and protect your bottom.

HolIgor: Comment to White 130. Why from this side? The group to the left becomes weaker and weaker. It will not die but now each move of the opponent against it becomes large urgent sente. This will end in defending two points of territory while White closes the territory in the corner and in the center without any trouble.

White 128 should have been answered by connecting two black groups. This connection was larger than the monkey jump.

mat Sorry, I didn't get the point. Connect which two groups? Do you mean "answer to Black 128" or Black 128 itself?

HolIgor: I meant, for example:

Connecting two groups has the advantage that the life would not be in danger and moves against the single group would not be that urgent. Allowing your groups to be separated loses more than a monkey jump.

mat You mean White 117 was less than ideal? Well, unfortunately White now has both separated Black and performed the monkey jump... 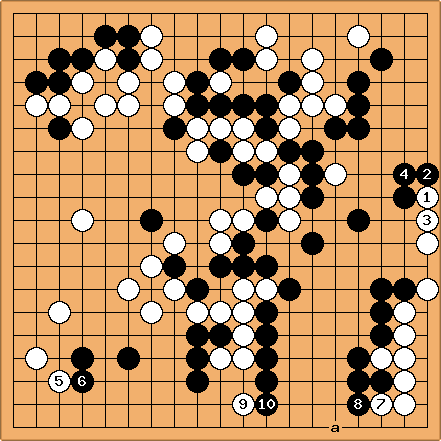 Dave Of course I won't tell you (partly because I don't actually know :-) But we will be able to look at it later.

Dave White 127 This is one of the interesting moves here. A black play here is sente against the corner.

matI would have bet that you would play at a instead.

After 8 (actually after 4) White is dead. As a result, White has to answer 2 at 4 and Black cuts off the stone at 1. If Black had played at 2 in the game any time after the two marked stones were exchanged, White could only have answered at 4. In this way Black would have closed the side in sente. When Black answers at 128 in the game, he has closed off the side in gote. 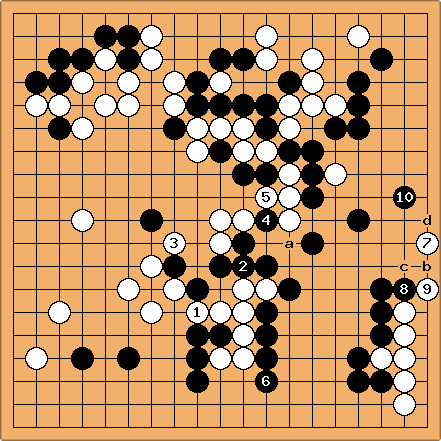 Dave After Black 114, White 115 there is bad aji in the center for White (Black at a threatens a big ko). As a result the white hane at 116 is less of a threat than it was. White 117 is not necessarily the biggest move in an absolute sense but it threatens a wide open black territory so Black seems to have to answer. Probably Black 116 at 118 was best.

mat Black 120 I don't think anything tighter will stop you.

Dave You are probably right. The reason is the exchange of 118 for 119. White 119 protects the point at b. If 119 were not there, you would be able to play at c or d, for example, and stop White more tightly than in the game. 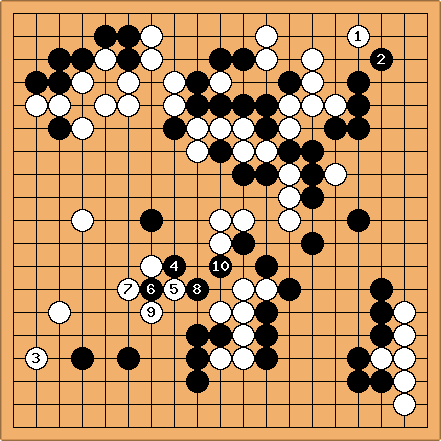 Dave White 101 I'll push into your area in order to reduce it but more importantly to prevent you from forcing me to remove your stones at the top. 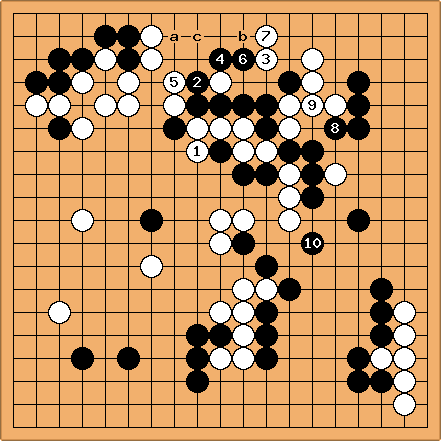 Dave White 93 Now we have choices. Does this one work? Who is in more trouble here? :-)

mat I honestly don't know (I suppose you do), I guess I can get a ko if I don't make a mistake... This time I will not communicate my thoughts, since that increases the likelihood of your exploiting an error of mine ;-)
Dave I think this is a very complicated position and I really don't know what is the status. It will be interesting to look at alternatives later. :-)

Dave White 97 I don't know that 95 was the right approach. In theory when you played 92 without atari at 95 I should be happy to let you capture 89 since then 92 would become essentially a wasted stone. On the other hand trying to read out the fight if you broke out into the left was giving me a headache! :-)

mat I was looking forward to the breakthrough...

Uhhhh I think this was a mistake. If you want to let me withdraw it, you can put Black 98 at a. Otherwise I wouldn't be surprised if you go to b...

Take your time and decide which you prefer. I'll wait for you to clarify your choice. Dave

mat Black 100 I feel better with this stone. 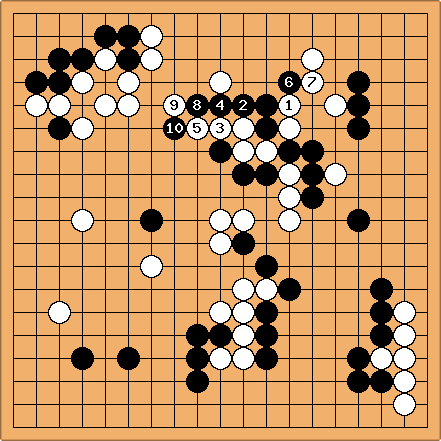 Dave White 81 One way or another this should decide the game shortly.

mat Black 82 Let's get one extra liberty in sente. 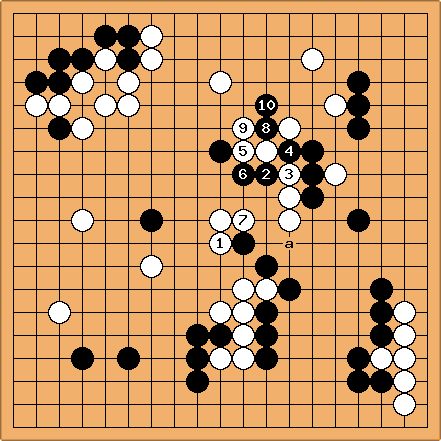 mat Black 72 I really want to play a, but since Black 72 is sente I hope it's not a mistake. I don't dare think that it works, but I'll try.

Dave I didn't originally plan to answer 72 with 73. When I settled on 71 I thought that I would have to compromise with a play at White 76. But at the last minute I thought, "What the heck, this is a teaching game; maybe we will both learn something!" Somewhere in The Direction of Play, Kajiwara writes that if an attack won't work, better not to start the attack. The problem with us amateurs is that we lack the skill (or are too lazy) to read out the result properly. White 73 may or may not be an overplay. Unfortunately the play of a couple of ??? (by the way, what is the Go term equivalent of ''patzer'' in chess? no offence intended!) probably won't teach us the true result anyway :-)

Dave White 75; will this hold it all together?

mat Black 76 Hmmmm, either I connect to Black 68 or Black 78 will let me destroy a bit of your territory. I'm not so sure about the latter one...

Dave White 77 Naturally I can't let you connect so easily. So let's see how much damage you can do to the top...

Dave White 79 I think this one really is inevitable. :-)