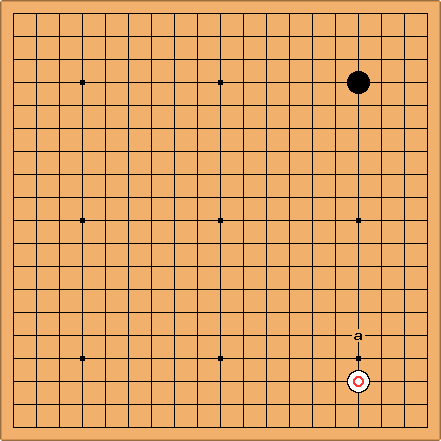 NhanHo? : In The Direction of Play, Takeo Kajiwara says that

is a losing move . The reason is because of the black stone at hoshi , black now have a perfect approach at "a". So here is my question , according to that theory, 2nd move komoku is always a losing move, because then your opponent can always play at hoshi facing your komoku . What 's wrong here ?

Bill: First, Kajiwara is a known jokester. Overstatement seems likely. However, this is a question we have explored online, on SL, as I recall, and, indeed, for White to allow this kind of 4-4 vs. 3-4 position (as by any 3-4 play on move 2) seems to be statistically disadvantageous. So maybe it is not much of an overstatement.

Dave: According to GoGoD this

first appeared in game 1 of the Jiji Shinpo 10-game match between Kitani and Go Seigen in 1933.

Dieter: Knowing that in the 5.5 komi era, the overall winning percentages were

(figures taken from komi), Kajiwara may have been overstating things just a little more.

Bob McGuigan: In the original question it was asked why it isn't always bad for White to play second move komoku. In the question diagram it is Black's turn so Black can immediately approach at a (or a keima approach). If the order of moves had been as in this diagram 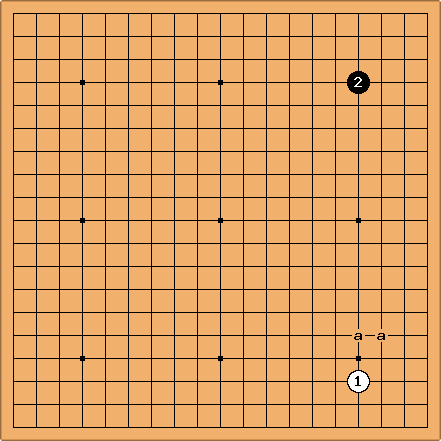 Now Black has lost the ability to play at the a points immediately. This is a small point, but it could affect subsequent play.

Dave: The question arose from reading Kajiwara's book. Even with Black playing first, Kajiwara's claim has to be discounted by the evidence. Out of 120 hits, only 3 games featured a direct play in the lower right and the only time Black played immediately Kajiwara's high approach was a game between Hashimoto Utaro and Takagawa Kaku (Black) played at a "party to celebrate the promotion of Mitsuhara? 7-dan".

Xanthus: Kajiwara's claim is not that you should play in the lower right immediately, as you say. (Actually he suggests a move that I can't find in any pro game at all.)

Bill: I found the earlier discussion on Go Discussions, starting with this note:

I did a Go Base search that suggested this next play for Black : 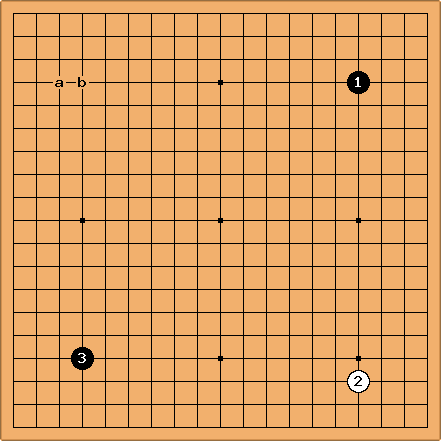 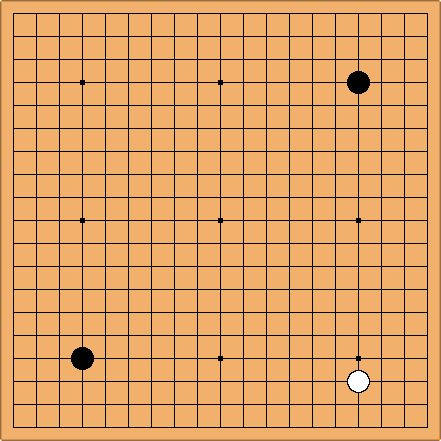 Bill: My Go Base search (from 1970 on) did not distinguish

. This pattern favored Black by about 65% (37 to 20). OC, statistics do not prove anything, but they do support Kajiwara's claim.