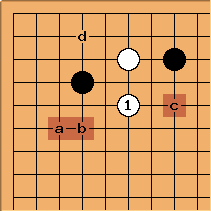 is to stop Black from getting a framework on the left side. It leads to a rather complex joseki, but professionals regard it as slightly better for Black. Black will defend his left-side position with a or b. ''c'' is a gate to various Chinese classical joseki. d is an old fashioned joseki, which seems to be making a comeback. 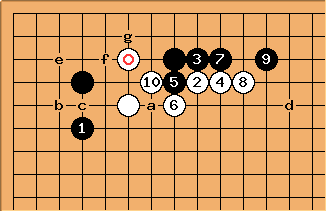 is regarded as correct. The sequence to

is regarded as joseki, but the general feeling among professionals is that this is slightly better for Black, because coming back to defend at

is too slow because it is unnecessary. If black pushes to cut off

(with a black play at

by making life in the corner with a play at e. On the other hand, if the exchange of black f for white g has been made, then white does need to go back and protect her investment with a move around

has not been played recently - it has to some extent been replaced by White at a, which has been refined by White b, Black c, White a. But often

is d, then tenuki. Charles Matthews

There is an interesting discussion on what Charles refers to in Go World 100 (or 102).

The order of moves in this variation is not strict. Black may play

. However, see "Black's fight" below. 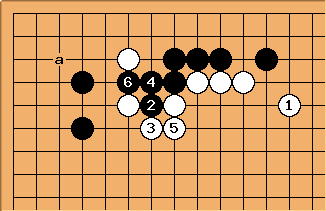 Because the result in the previous diagram is considered unsatisfactory for White, other possibilities have been attempted for

here. If next Black plays

, White still has the invasion at a to look forward to. It is unlikely that White will die if she plays there, but she does run the risk that it is too small to play now. The play at a is basically a very large endgame move, and should therefore be kept for the late middle game.

How should white continue locally? I've seen shape like

described as a severe type of move, but I can't see how to best answer when black resists. For the purposes of the position, lets suppose white has a hoshi stone on the upper right corner, since I think it's the most natural shape where to play the marked stone. Is it better for white to extend at

instead of pushing down again at

Black should achieve a similar result here, if they so will.

(I'm not quite sure how this works yet, but I hope everything appears alright to anyone viewing.) 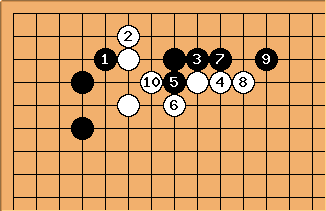 used to be considered joseki. The result is equal to the previous joseki, except for the

exchange. Unfortunately for White, Black might well use stronger weapons... 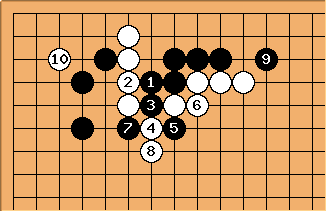 in the previous diagram, Black could play the crude but severe moves of

first. White's four stones are under attack, and if there is a black stone around the middle of the left side (which often there is when this joseki is played), she probably has to search for life with 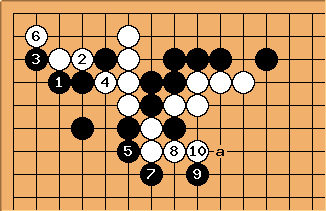 White can live in the corner, but because she has to play

to do so, Black can take control of the center with

. Black is clearly better off in this diagram. 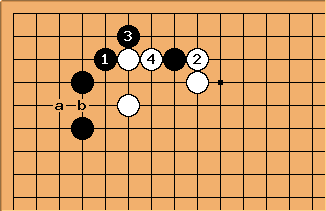 Because the previous diagram leads to disaster,

is considered correct. After

, fighting in this area comes to a temporary halt. Sometimes

is omitted. White could try to exchange White a for Black b before playing 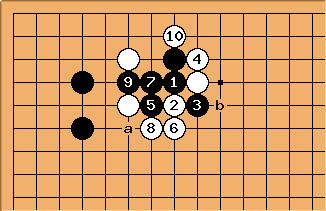 Black's third possibility [101] is the combination of

, which leads to strong fighting (if

, we get a transposition to the joseki above). Black should not play this way if the ladder at b works for White, but if it does not, and there are black stones in the neighbourhood to help him, this could become very painful for White. 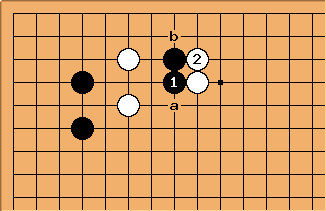 Rui Naiwei suggests in Essential Joseki that Black 1 is not good simply because black cannot protect A and B at the same time. Has this thinking been outdated? Remillard

RFrohardt: In The Direction of Play, Kajiwara discusses this joseki and makes the same remark about Black 1.

a lecture by Guo Juan, 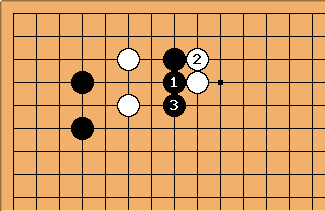 LukeNine45: How should white respond to this then? It seems if she takes care of some of her stones, it will hurt the ones on the other side? 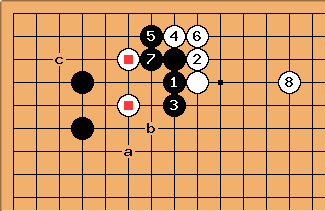 RFrohardt: None of my books discuss what would happen after Black 3, although my opinion would be that after the exchange up to White 8, White can still be happy. Not only does he have a secure group on top, but a play later at a or b could be trouble for black. White also still has the invasion at c and can sacrifice the marked stones which are still light. However, I'd be curious how a stronger player feels about this exhange.

LukeNine45: Thanks! I guess what I've been playing isn't so bad after all! :) 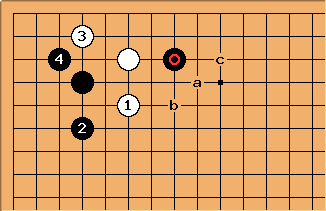 , there is no real alternative to White a. White b is too mild (Dieter: I remember though that Kobayashi Satoru was a strong advocate of this move, disfavouring a), while exchanging

is considered bad because White loses the option of invading at the 3-3 point. This exchange should only be made if White intends to build a base on the upper side, but doing so has been made a priori impossible by

xela: I disagree with "there is no real alternative..."

at c appears in several professional games since 1987 (I've found 25 examples so far).

erikpan: So does anyone have any suggestions for a response to white at c instead of 3? Black jumping out to b seems a lot of work to pull that pincer stone out into the centre.

http://eidogo.com/#kjd:pdqfqhofnd), Guo Juan will play 3 at 4 to avoid complications. -- Anonymous 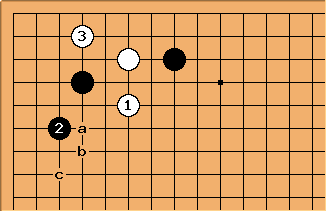 are similar to those after Black a, although there are some differences. One of those is that

is considered not completely out of the question in this position, because White has more difficulties living in the corner, so giving up that option is less of a problem. White may be able to press

down with a shoulder hit (b) and the available kikashi above a, threatening to cut the knight's move. On the other hand,

is more territorial, being less vulnerable to approach from the direction of c. (The third line move "finishes" the left side, whereas Black a tries to develop it.)

See also the go bloopers page, on the 'misplaced slide'.

[101] This cut line has been played frequently in recent pro games; it really needs its own page.

The Joseki at work in pro games