A nakade (ナカデ or 中手) is a play inside an opponent's eye.

(Written in katakana or kanji in Japanese. Hiragana is wrong. Borrowing is not the only criterion for katakana. Italicisation and replacement for kanji are other uses.) 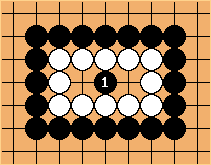 Black can kill this group by playing nakade at 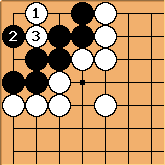 Be aware however that these basic shapes ignore two major effects:

For several possible reasons, the eye shape may contain more enemy stones. Any eye shape which is filled with stones so that almost filling it with a killing shape is inevitable, is dead. These patterns are listed at killable eyeshapes.

At the end of the game, White can (and should, under Japanese rules), take the

Now neither group can approach at a without putting itself in atari.