A throw-in is a sacrifice stone played at the point where the enemy wants to connect, giving rise to a false eye, shortage of liberties, snapback, oiotoshi (connect-and-die), or squeeze. The expression feed may also be used: "(force-)feed the enemy a stone".

A throw-in is different from a nakade. A nakade is a play inside a real eye. A throw-in makes or maintains a false eye.

, trying to grab an extra point, is a mistake. Black can throw in at

, and the eye here is false. Even if White takes at a, Black does not have to respond, as the eye at

would have been life. 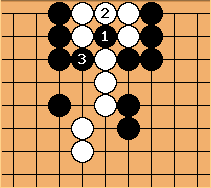 In this example, a throw-in is used to remove the eye which White could have made here. 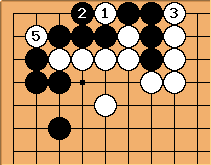 The throw-in is commonly used to reduce the opponent's liberties, inducing shortage of liberties of some form. In this example, it allows White to capture some Black stones in a connect-and-die.