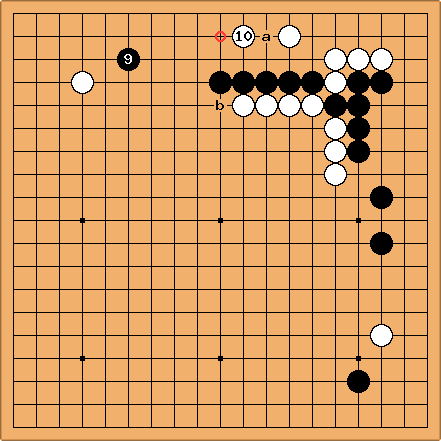 . Black has definitely to do something to settle this group and the approach is reasonable. Another options would be limiting the white's corner group with a and turn to the centre with b. But as I undertand black was not sure if a was sente while b seems to attack quite a strong group.

Dave: Since Black decides to answer

, it seems to me that

is a miscalculation? Since attaching at

in the next diagram has almost no impact on White, this seems like a loss to me. If Black attaches immediately at a what will White do? 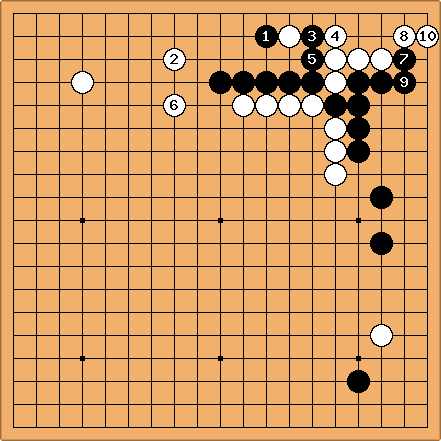 Dave If White plays from the outside,

looks severe to me. In reply to

threatens the corner (see below), right? If White plays at

, then after the block and connection Black at

will allow Black to turn against the center White stones. 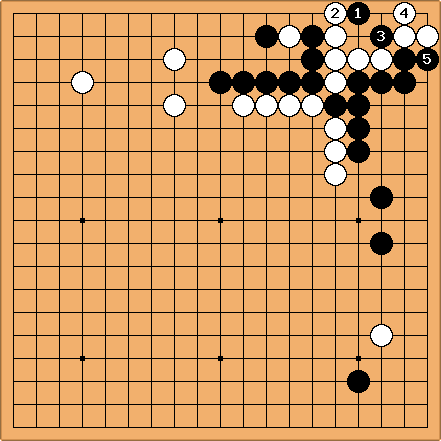 from the other side leaves less aji. Just kidding. But recently I am repriminding myself for losing some points in the situations like this when the main point is the same yet there is a small difference in points between two moves.

was surprising. A solid move but on the second line? 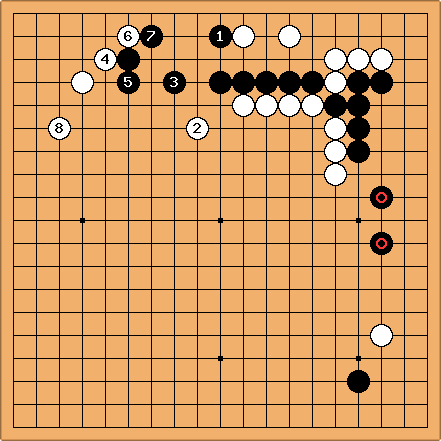 seems to be a clever move. If black makes a double kakari in the left top corner, he is asking for trouble with his top side group. White seems to capture the initiative.

. Black defends once more. It seems that he misread a lot by not pressing white down as Dave shown in the previous diagram. But recently I played a game in which my opponent made about 5 mistakes like this. I, certainly, won. But 10 points only. That is an indication of how I play.

. Since black is already strong here white tries to get the corner and prevent the counterattack. Interesting that this is considered more than the empty corner or a jump out in the lower right.

unkx80: Allowing Black to play the double approach at

DJ: Following Dave and HolIgor two comments above, here's two other diagrams from the Korean Baduk Monthly about possible

alternatives to Black 31 (played in the game at the marked point in the diagram below): 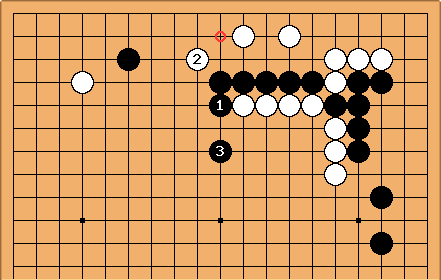 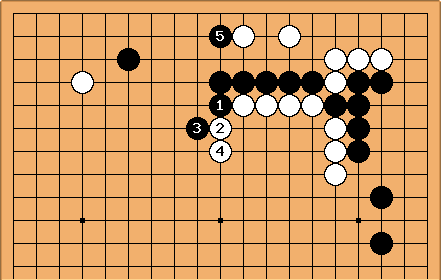 DJ: It seems to me the first diagram shows Black attacking the strong (?) white group, while in the second Black seems well settled. Did Black miss an opportunity here?

Dave: In the TV analysis Oya-sensei has an interesting analysis of the plays from 29-38. 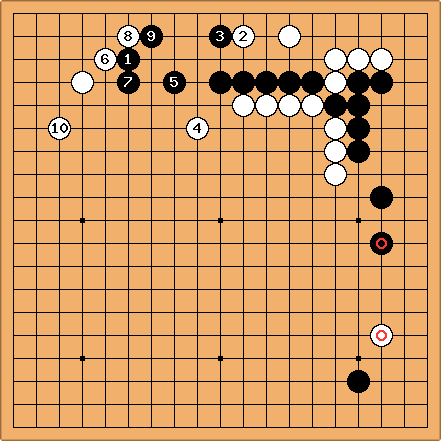 Up to this point he considers that Black has gotten of to a very good start due the exchange of the marked stones in the bottom right and the effect of the Black pincer on the upper right. However he considers

here a mistake. White takes advantage of this with 4 forcing moves. At the end of the sequence Yi assesses that the advantage has passed to White and so calmly plays

instead of taking the lower left corner. 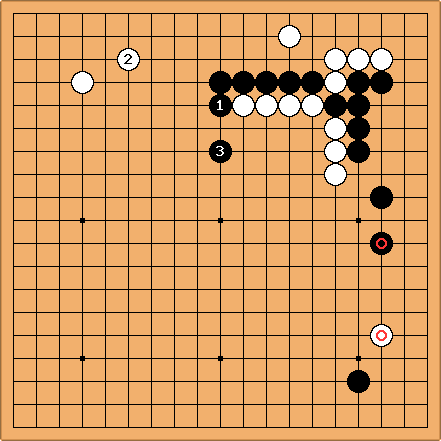 Oya-sensei thought 29 should have been at

begins an attack on the center group. It will not die but will be a burden that will give Black an easy game. 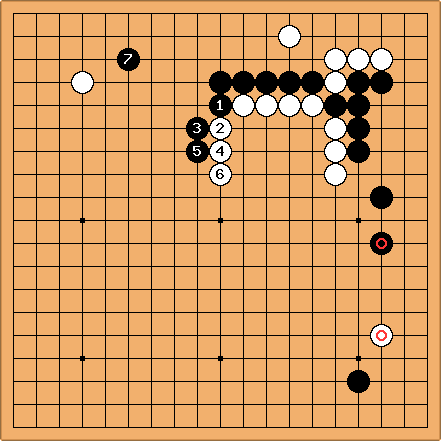 If White answers at

, Black pushes before turning back to

with a much better position than in the game. 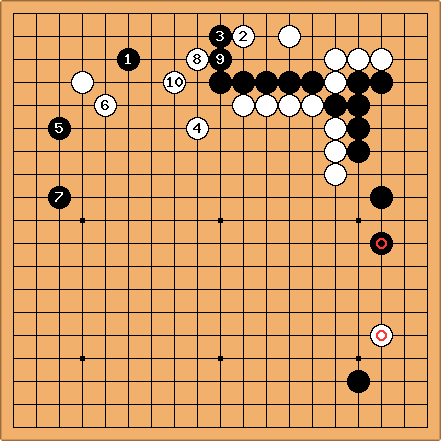 Black falls into a kind of trap when he answers

is a direct threat against the top. Oya-sensei gave this variation. 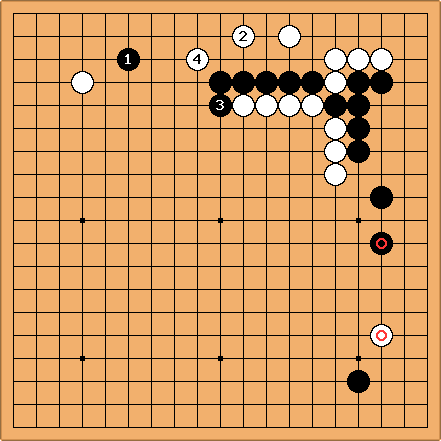 so forcing? Black can still turn at

. Now both have approached (

) but White is on the second line and Black on the third, and Black has the advantage in the open space, by having turned at

. White now faces a double approach or capture of her central group.

seems like a lost move: a genuine trick play?

Dave It becomes a forcing move when Black answers it. It seems like Black did not anticipate White's next play, which had become a real forcing move. As the magazine analysis said above, Black would be better off to push up at

on the board, I doubt that White will answer

though. I would expect White to play out at

(as per the magazine variation posted above) out of fighting spirit. In the TV analysis, however, the negative comments were directed at

a clever counter to

rather than a trick play. 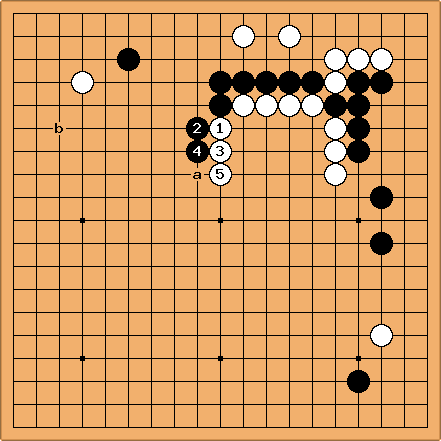 Here, I think I would still prefer Black a to Black b. I think both are in for a pushing battle 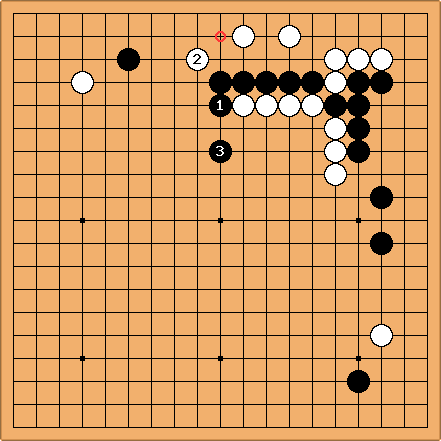 Dieter: Great! I missed that Korean magazine variation when I wrote my comments, but the mindset is not surprising: take and give. I would like to analyze this position a bit more. 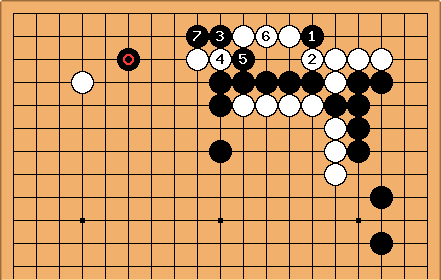 There is the potential of

(maybe better unplayed), which is probaby best countered this way: ... 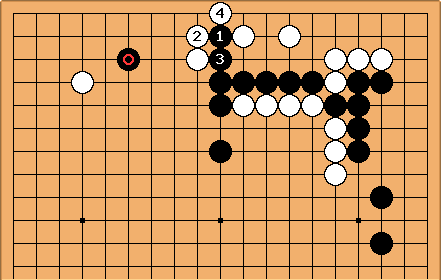 ... but then the potential is not fully gone either. Secondly, ... 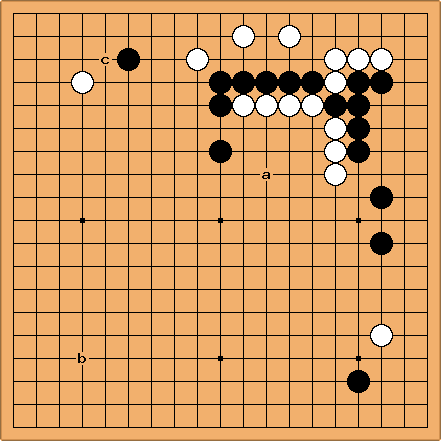 Any suggestions for White? a flee with the central group? b Shift to the open corner? c Deny flexibility to the lone black stone?

Dave: White does not seem to have anywhere worthwhile to flee to. Any movement down the right side will weaken the single stone in the bottom right. So now there may be nothing better than making some shape for the center group. I think we can see why the magazine recommended this as better than the game. The alternative of turning away to the bottom left would depend on a careful assessment of the overall game position - but of course that is exactly what Yi is so famous for :-)