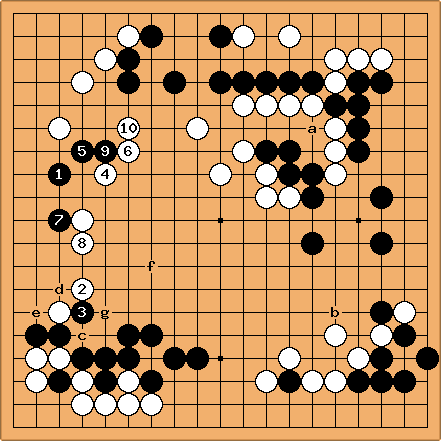 . White stones do not feel too comfortable against the black wall, so one of the aims of

is to cut them off.

I would be scared to invade so deep. Wang Lei has everything read out.

exchange, white decided to trade the possible territory on the right for the centre. This seems very safe and perhaps requires a good estimation of the score. No problems with the stones near the strong black wall, everything seems to be connected. There should be a lot of reading behind these moves. Could white actually kill the invader?

Hikaru79: I do not understand

, forcing c? This seems to lose the cutting point that white has at d, as well as reduce the value of a play around e. Obviously I'm missing something ^ ^;; Could someone fill me in?

HolIgor:: It is very difficult to say. Perhaps white is thinking in terms of the most efficient way to close the center with a move around f. I can say only that playing e and forcing the opponent to descend to the first line endangers the corner, not a very good idea.

Dave: Another thing to realize about the

exchange is that White can still play g later if that is appropriate. 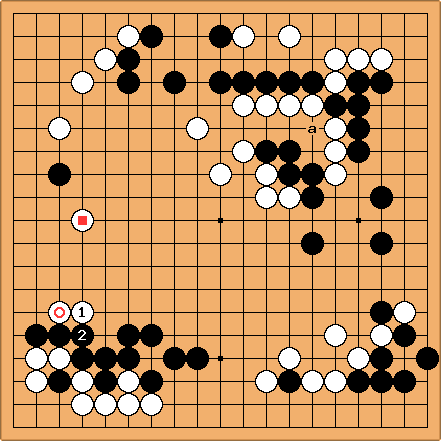 Bill: Compare this diagram with the game.

are heavy and too close to Black's strong wall. Remember the proverb, Do not approach strong stones. It applies to kikashi as well. ;-) White's kosumi in the game also threatens the cut, but is lighter, safer, more flexible, and better coordinated with

Charles See also too close. A diagonal play, quite generally, can be used in a middlegame fight to 'move' a group one line in a preferred direction.

HolIgor:: Returning to the main diagram.

exchange seems to be natural at the same time this is the most difficult to understand part of the game.

leaves behind a cutting point. The question whether in the case white connect solidly, black had anything in the corner. As will be seen in the game

actually connects the corner stones to the centre. Yet, white's losses in the game seem colossal. On the other hand, at a certain moment I would like to ask a question from Hikaru no Go: did white read this far? Understanding at least a part of the reasoning behind the moves is an achievement. 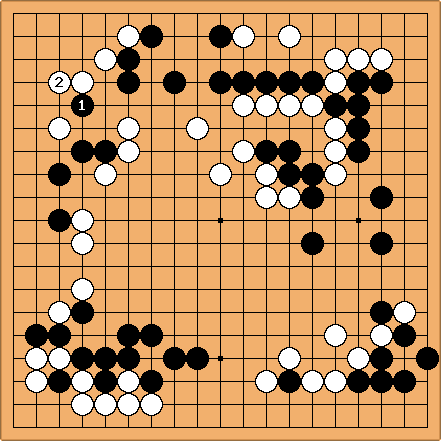 HolIgor:: The problem is in understanding

. Now black can connect easily and then think about a cut in the centre. But,perhaps, after black's connection white can simply patch the cut while th corner is already safe. So, there is a small life and death problem to solve. 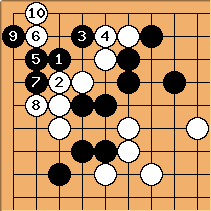 Dave: Trouble isn't the word for this! Now the problem is "White to live". 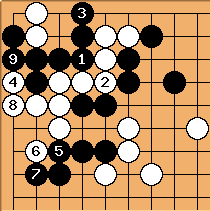 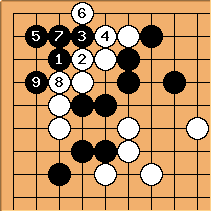 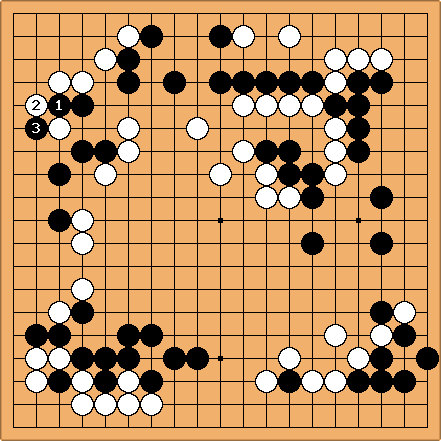 HolIgor: Returning to the main diagram

are insolent moves that are very difficult to estimate. Black invites white to make an exchange in which black would capture the corner and white would take the left side, possibly. White could also live in the corner but black would settle on the right.

What are the options here 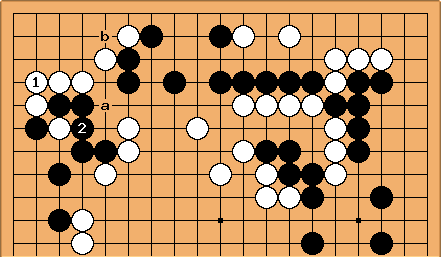 HolIgor: White can choose to keep the corner.

keeps white groups disconnected and leaves an option to connect to the top group. Connecting to the top group immediately with a loses some points and releaves the pressure on the corner group. Now black at b looks like sente. Black has actually take into account the fact that the group at the top is not very strong and can be attacked yet. The result of this diagram is easy settlement in this part of the board. White keeps the corner and black is alive at the left side. 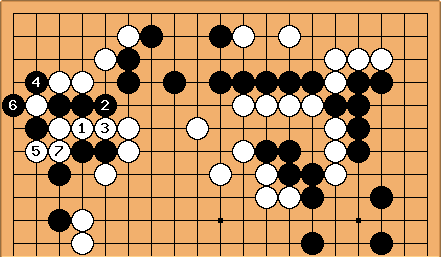 HolIgor: I think that white loses too much here. The side is not big enough to compensate. 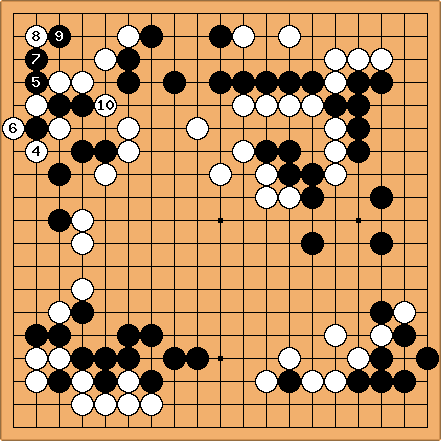 HolIgor: White has everything under control. I am not sure that

sequence is the best result of the fight. In this situation white cannot hold the corner and cannot kill the black group on the right side. What seemed sure white's territory is devastated. Did white make a mistake here? Can we find this mistake?

are the fighting tesuji here. White read all this quite a long ago and in the case you don't know the outcome you can try to read out it yourself. That is the variation for very tough guys,

saves the stones in the corner. 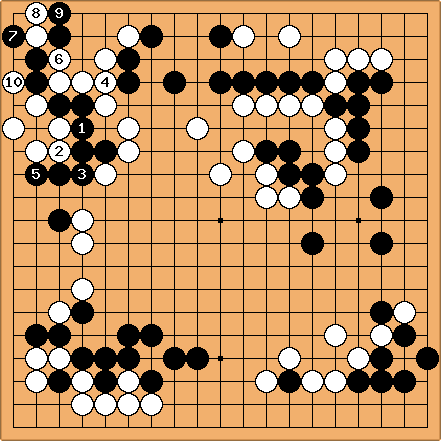 HolIgor: A lot of moves at once but after

at the previous diagram this is a variation without much branching.

makes a connection to the centre and now the black group at the top is not particularly safe.

is a must, because allowing white to make two eyes would be a disaster.

is usual in such situations, otherwise black would have two eyes. Finally, white gets a very important move at

on a way to a seki in the corner. 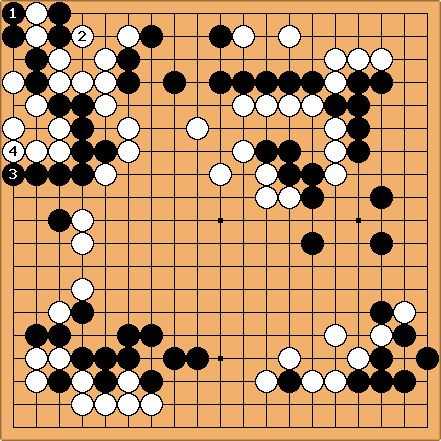 finish the non-branching sequence. Now the situation has to be analysed. Of course, the players themselves had to see and assess this position before even starting the sequence some 15 moves back.

HolIgor: Black is definitely safe. White cannot kill. White group can be killed if black wins the ko. But in order to get that ko black has to commit his own group.

then white replies with

. The ko starts. If white finds a ko-threat, which is not difficult because the top black group is not that safe, black will have to capture

and White will play at a. Black retakes the ko and white has to find another ko-threat.

HolIgor: What it the price of all this? White has 7 stones in danger so, roughly, black can win 14 points degiri or 7 points miai counting. Not a lot. Look at the miai values list for comparison. At the same time black has to commit his 6 stones which makes the value of the ko about 13 points miai. The difference is that 6 points miai are first taken from black's pocket.

HolIgor: Important thing is that black has to do it now or never. At the first opportunity white would play

changing the situation to a single possible ko which in that case would become a 1000 years ko, really.

HolIgor: At the same time white will have to play the rest of the game knowing that at some point a will be necessary to turn the situation into true seki.

HolIgor: After all that there is a life and death problem at the top. What is the status? Oh, yes, on the left side black's group is not safe yet as well. 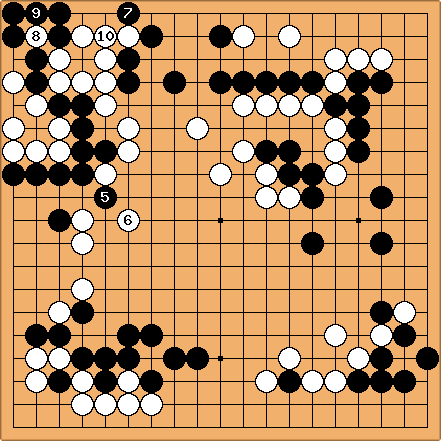 HolIgor: Black can live by winning the ko, yet that is a difficult way, so black tries to accomodate his group on the left and cut off weak white stones there.

is a way to connect.

, which decreases the numeber of ko-threats in case black would take the risk of fighting the ko in the corner. Playing