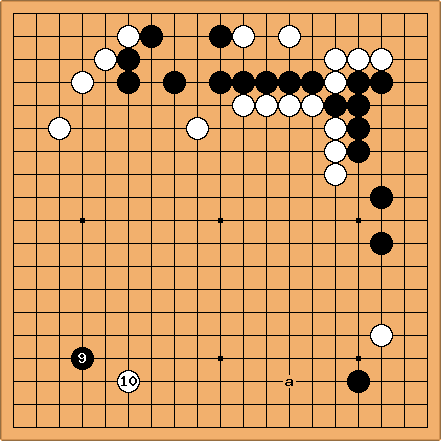 is a move in the empty corner. Taking the star point black, perhaps looks at the pespectives to create some framework at the bottom.

. The approach is perhaps from this side because the left is not interesting and easily reducable. White looks for the ways to erase rather than construct. White has two corners now and rather good options to convert the center into a mire. The problem is right bottom.

is aiming at a, since with the

stones, jumping out from the bottom right corner is not very interesting. I guess the next Black move is a pincer.

HolIgor: Yes, you are probably right. This thing in fuseki is my blind point. Now I clearly see that if black just extends on the left side then white has a good double hasami in the lower right corner. So, black has to play a pincer attacking white stone and creating a framework in the lower right quarter. 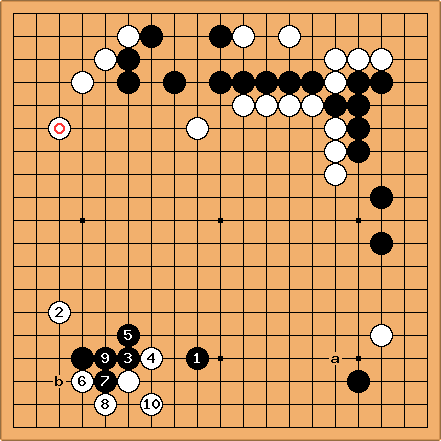 HolIgor: I don't know what considerations determined the choice of this particular pincer

. There are several points around that seems to serve the same purpose.

Dave: The most common pincer in pro play is the low one-space but in this case since White has the ability to press Black down with a on the right it looks like a high pincer makes more sense. The two-space high is the next most common choice and probably makes the most sense. Black does not want to play further away because, again, the lower right may get pushed down. The one-space high is of course an alternative.

. As black creates a great sphere of influnce in the lower right quarter white has to compensate with a fight. Of course, white has a stone right in the heart of black's shere of influence. It is not a problem to get a small life there provided white plays there first. So, what plan could white chose to reply to the pincer. The pincer is high and quite far. So, jumping out is not that interesting. If white jumps out and then plays a pincer at the bottom the game would become an unpredictable melee. Actually, it will become an unpredictable melee anyway as every game of go becomes, but, probably, it is not time.

Taking the corner by playing san-san is not interesting since the black's sphere of influence would become very large. So, white plays a double pincer.

. I was taught to lean on a stronger stone and here black chooses to lean on a weaker one. I don't understand the plan here.

Dave: If we look in the databases we find that playing against the stronger stone is clearly favored when Black plays the 3-space low pincer (although much less so in modern Go than in classical Go) and slightly favored with the 3-space high pincer. On the other hand, playing against the weaker stone is more frequent by about 10-1 with the 2-space high pincer. I assume that this is because the narrower pincer means that Black can not expect sufficient compensation from forcing the strong-side stones into good shape before turning back against the weaker stone.

the decision about the joseki was made. White decided to be content with small life.

Dave: I think this is probably the most natural choice here. If White enters at b and Black answers at

, then White is going to end up with a low position in both the bottom left and the top left (see marked stone). This is probably not attractive. On the other hand, White hardly ever pushes at 7 unless there is White strength to the right that will support an attack on the Black pincer stone. That is not the case here. 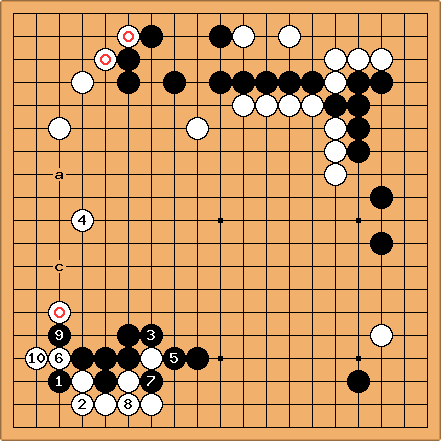 is a fast move, yet in my opinion it is too thin. White formation on the left side is full of holes, the group at the bottom is attackable which means that 4 is effectively played very close to the black's thickness. I think that in situations like this white's marked stone has to be treated lighly and the enforcement of the top should be thicker. So, I think that

had to be closer to the top. But Yi knows better, of course.

closer to the top would be overconcentrated. White has already played the marked stones in the upper left, strengthening the corner. White has to be ready to allow Black to invade at a.

This is now virtually a one-purpose move since it has only limited impact on the corner. Because of the cutting point at

, the invasion at c is impossible at present and will always be small/slow in the future regardless of whether White cuts at

or Black connects. The play at

looks natural to me with a good balance between the side and the White stones in the center. 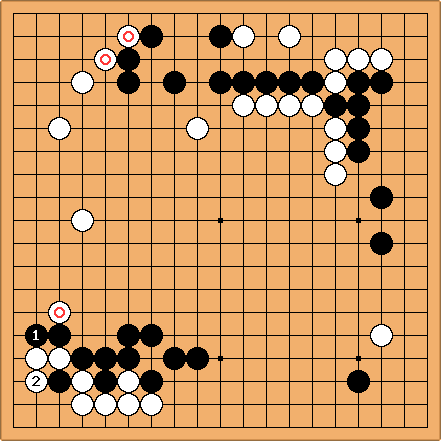 The tv analysis had an interesting look at 56 and 58. By the way, 54 passed without comment so I guess Oya-sensei thought it was natural.

The basic idea is that after White plays tenuki with 54, there are two follow-up plays for Black: 55 and 59. They are miai and White should not let Black get both. 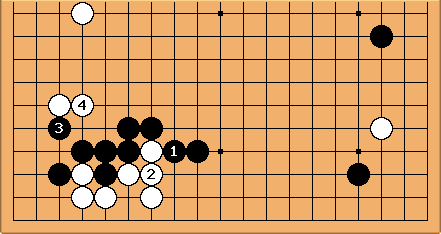 So Black plays 55 because the question of the lower right is large in this game. White cuts at 56 to maintain an appropriate balance in the lower right.

Now Black captures a stone with 57. According to Oya-sensei, the usual continuation for White would be a play at 59. However, it that case, Black captures again and White has to answer in the corner. 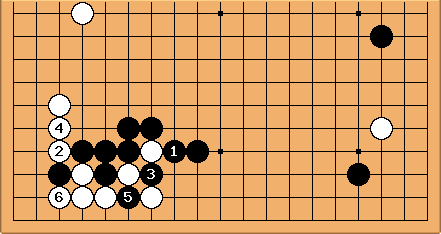 The result here is that Black has closed off the bottom in sente. White has more in the bottom left but the game will now depend on what Black can make of the bottom right.

However, White's thinking (and play) is more subtle than the above analysis alone indicates. 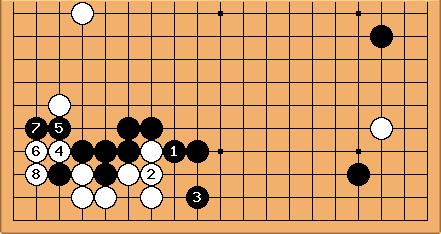 Oya-sensei put up this variation to explain. Despite the basic miai analysis above, Black will not play

. In this game the main issue is the bottom right. So Black will continue with

and play continues as in the game. At the end of this diagram, Black has sente and the lower side has been blocked off by

. In contrast, in the actual game Black has sente but the lower side has not been blocked off (White ends up connecting along the bottom edge in the game). Black captures a stone in the game and White answers in a seemingly passive way but in fact Black fails to achieve the strategic goal of closing off the side. White is satisfied. Dave