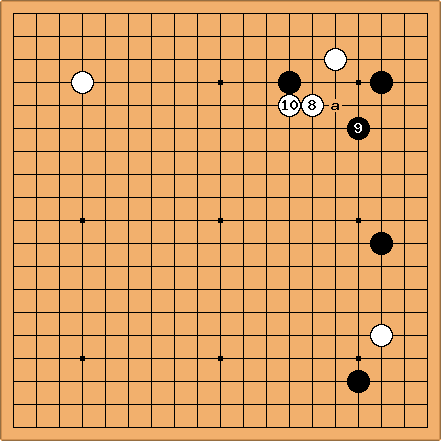 is a joseki move. Black chooses

Problem 1. What are other common answers? Dave I think there are no other answers worth considering here.

is perfect for connecting 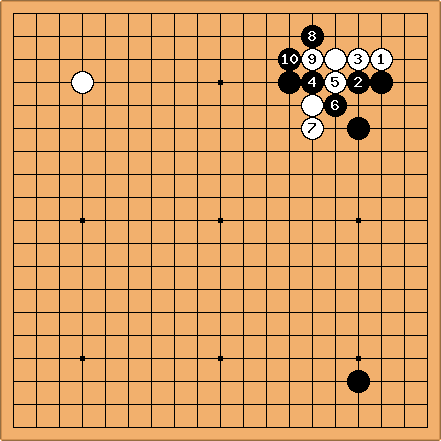 Dave: Without the exchange of approach move and pincer in the lower right they played a normal "Meiji Title" joseki in the upper right.

here is the usual play. When Black jumps toward the edge with 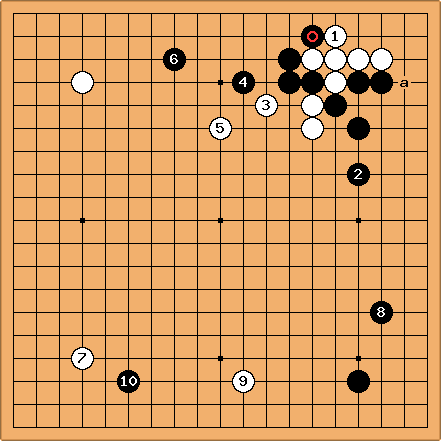 Dave: Play continued as shown. When White plays 1 the corner is safe because capturing the marked stone and playing the hane at a are miai. Black turns away to play 2 on the right and the 3-6 exchange on the top are quite normal. White used his sente to play in the lower left and Black naturally enclosed the lower right.

Yi's push at 10 in the game we are studying changes the situation in the upper right corner. Once White pushes Black out along the top, Black's jump to the edge becomes more severe because Black need not give White the opportunity to capture the marked stone in the Rin - Ch'oe game. We can see why Yi took the opportunity to slide out along the top. Could Black have prevented this? 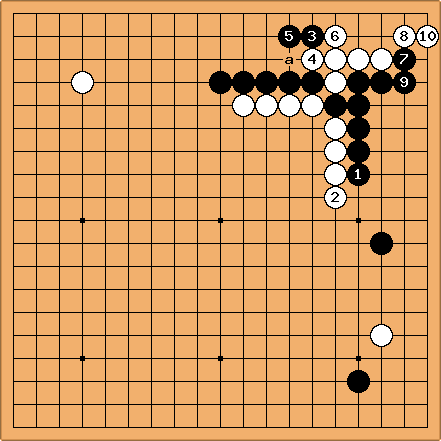 Dave: What if Black had continued to push with 27 at

here? If White answers at 2 and Black jumps to 3, the push at 4 achieves nothing. If

, Black hanes and connects on the right in sente. After this Black a threatens to kill the corner (in the same way as shown below) so White must answer again. Is this enough compensation for making White stronger in the center and leaving a gap around 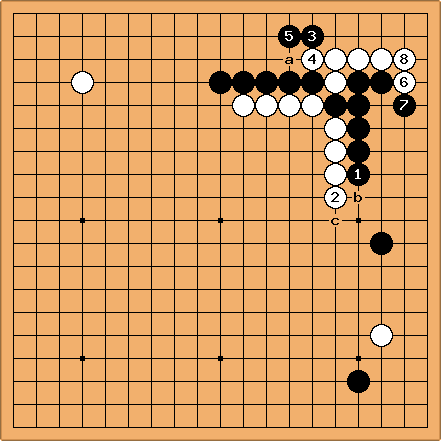 Dave: What happens if White switches

from the block to the hane and connection here? Is the aji on the right bad enough for Black that he must be worried here? Is there a killing tesuji? (Obviously Wang did not think so but it doesn't mean that we can figure out why not :-) If necessary can Black play b and expect White to answer again at c? 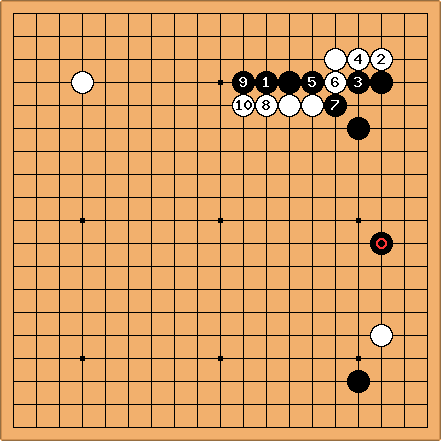 HolIgor: After black retracts with

white has to think about connection. Yet the connection should be shapy.

tries to achieve this. See here for analysis.

looks heavy to me. There are few examples of it in the databases but its record looks poor. Is Black trying too hard? Or is it that with the marked stone on the board already Black can afford to play harder?

are joseki stuff. Gobase contains another game form 1973 in which the same corner variation was played. White won then. Black could have chosen a hane instead of

from the game too bad already? 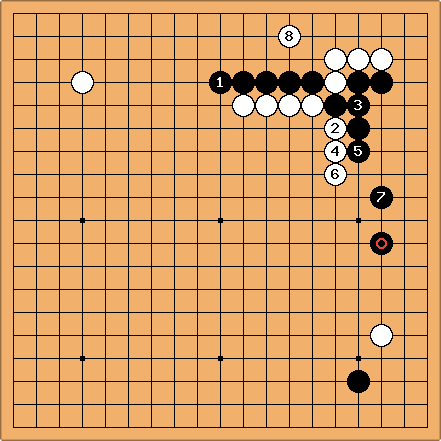 HolIgor: My impression is that this is very good for white. White got a corner and the floating group in the center is quite strong.

DJ: Hullo everybody! I've been enjoying these analysis a lot, when just the other day a Korean friend of mine brought me a Korean monthly baduk magazine, where this game is commented. Unfortunately I cannot read it, but I can watch the figures...
I can copy the diagram as they are, and we can see if they suggest us anything...
Now, the first diagrams offered are an alternative for

(white 24): a NidanBane! (But maybe this is just to confute such a possibility...) 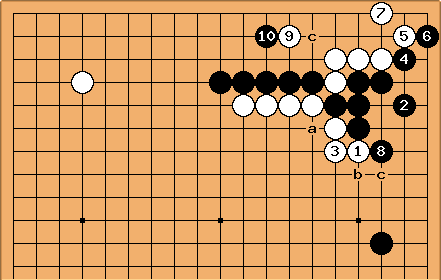 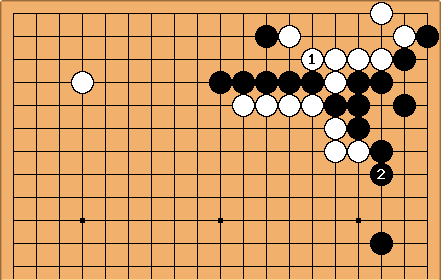 DJ: Does it look better for Black than in the game?

Looking hard between the Korean characters, it seems to me that the magazine suggests that if White plays

in the first diagram, then Black plays at

in the second diagram), then Black plays c. I cannot decipher the following comment, but it seems dangerous for White, doesn't it?
More to follow... 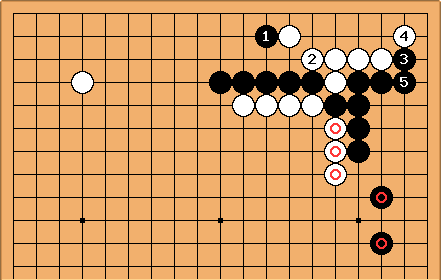 here and White had replied with

(analysis of other replies to this is below), then

Dave: I wonder how Black felt about

. It seems to make the marked stone misplaced. If the approach in the lower right were made after

, Black would certainly choose something other than the marked stone, no?