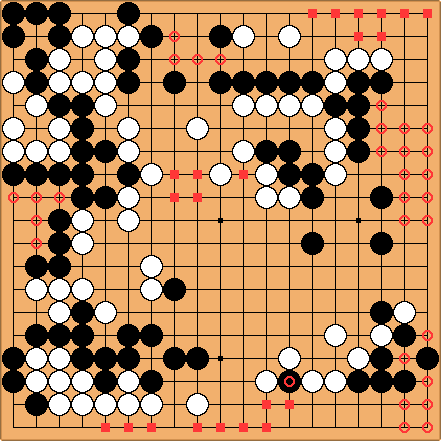 I have indicated what I consider at this point to the safe territory.

It black's move now, so we can add to the black's score half value of the largest move. This value is difficult to estimate but a capture in the lower right corner may be a good approximation, and I estimate it as 10 points, half of that is 5 points. Thus we obtain that at the moment black is 40 and white 32.5.

Bill: I think the top right is big, about 8-9 points. The difference is minor.

This is wrong, of course. There is always a sente part which can be one-sided. Who has more sente moves? It is difficult to say. On the other hand one can impose a 10 point penalty on black for having an eyeless group. Then the score is about OK.

Bill: Sente should have been figured into the calculations original calculations. OC, Black's weak group is urgent. 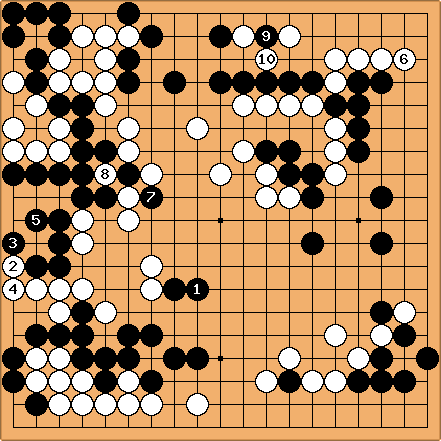 HolIgor: Black values his safety with

Dave: I think this also looks ahead to

. So this is a double-purpose play. If Black did not strengthen the position here, White's center could become very large while chasing Black.

look like moves white could play any time, just sente moves, nothing is gained nothing is lost.

to be the largest gote move on the board, or alternatively, he thinks it was sente. Well, if it was sente than we have to add two more points to the white's bag. If it were not sente then the value of this move is at least those two points and a sente monkey jump that is 7.5 miai (15).

. I wonder if this plan of reduction of white's centre was reasonable. I know from my own games that one of the worst things you can do is to continue to play midgame when your opponent started yose. You may win if you are right and there is yet a midgame potential on the board, yet if you are wrong you lose a lot of points.

HolIgor: Black threatens with a cut but first he must win the ko. This path is very difficult.

HolIgor: I am not very sure about this, but probably black is trying to use up the ko threats keeping an eye on the large but dangerous ko in the upper left corner. After all, black captures first there. 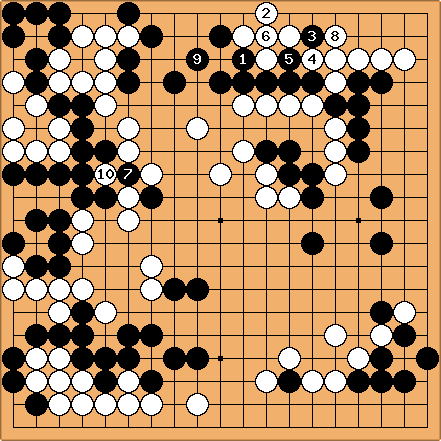 . It is always funny to watch how the ko threat is not a single move but a series of moves. And usually you a furious with yourself when your ko threat created a ko threat for your opponent. Nothing is achieved only some moves are wasted. That's why one ko threat can actually be a series of moves. One cannot just play a threat, take ko and then play another move in the sequence because the opponent has ko threat in the same region. In fact there is a double sente ko threat situation.

. White still has a ko-threat at the top. Black is eroding the ko-treats and a big ko on the left side is possible yet. 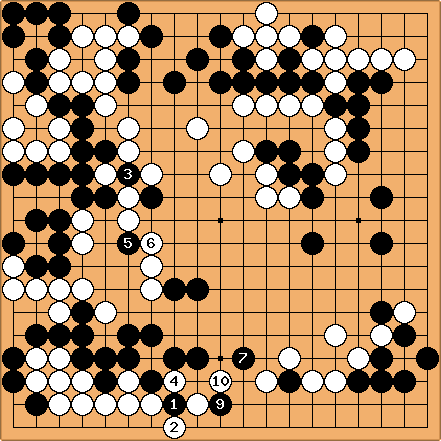 defends, black captures ko and white captures at the bottom with

. This move is a challenge. The value of the ko in the middles must have increased, for sure. White is confident. What can black do?

HolIgor: It is time to see what the ko was about. Black came with

which end up a dead stone eventually. What was the compensation? After

black could capture two stones. That does not look big at the moment and black plays 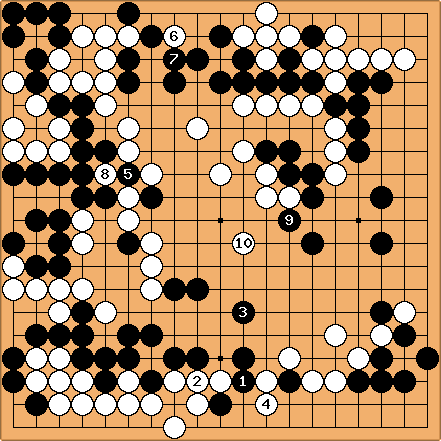 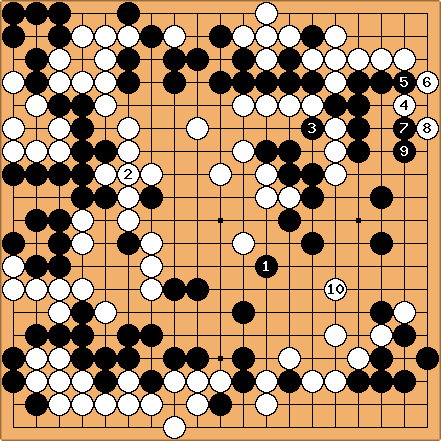