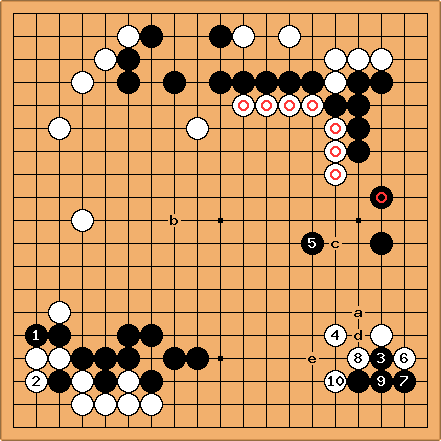 was expected. As Dave explained above white has carefully prepared an invasion point on the left. My problem is that I do not feel this. In my opinion at least one of the groups surronding the invasion point has to be thick. I don't have that impression in this case.

Now black has sente and has to choose either to invade or to make something about the right lower corner. What direction is correct there? Black has a pincer at place. He can choose to extend high on the lower side. White will live small in the corner then. The problem is whether the space at the bottom is an open skirt. That means whether black will have time to close it. That is a good piece of land. Another plan would be to take the territory in the corner and chase white stone to the centre.

Karl Knechtel: Is a shoulder hit at a possible, i.e. do Black's stones on the side help any? My idea is to let White live against the side while pushing on the fourth line, and then follow up with a centre move somewhere around b - creating a large moyo and attacking the marked White stones on a large scale. (Of course White will live easily, but it should reduce his options...) I am not sure whether to move b closer to the centre to be more secure against keshi, or further to the left to cap White's left side more aggressively.

HolIgor: I think this is an interesting idea. Can you try to give an expected variation?

. Black chooses to take the corner. This move intends to make white stones heavy nerai-ing (with a plan) to make some territory while attacking.

Dave: It seems to me that Black has a problem here. White would love to play around c as a follow up to the exchange in the top right. At the same time such a play would either extend support to stones escaping from the lower right or reduce Black influence gained by containing White in the lower right. In the absence of other stones the continuation W at d, Black at e, White at c is one of the traditional joseki involving a tenuki after a 3-space low pincer. Here the other Black stones already played may force White to play more lightly but the support from the upper right means that the Black moyo is not as threatening as it may seem.

HolIgor: How wonderful. Now we know and understand better.

. A move I can't do usually. White concedes the corner provided black crawls along the second line, which black would not do. Help is coming to white from the direction of c.

Dave: It is a reasonable idea here I think. As mentioned, White doesn't want to become heavy here. Meanwhile the marked Black stone means that it is not easy to achieve anything by plays against the pincer stone (attaching for example). Sometimes White will play a knight's move below

but I think White does not want to risk a fight here. The Black stones in the area are all strong so fighting would not seem like the right idea.

. Cuts the support off and forces white to live in the lower left region. At the same time puts some pressure on the white group in the centre. Now the question is how will white settle.

from the tv analysis... 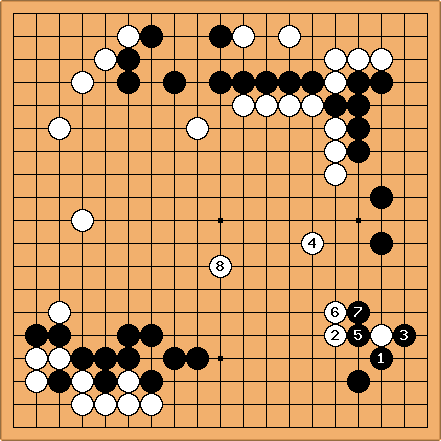 . The center becomes larger than the right side. Black has to play 65 to prevent something like this so White gets the next play in the corner.

. This seems to be a one way street. White confine black in the corner and create a situation when to stong attack from the outside can threaten the black corner group.

The problem here is why black does not want to play a lot of nozoki to make white heavier. 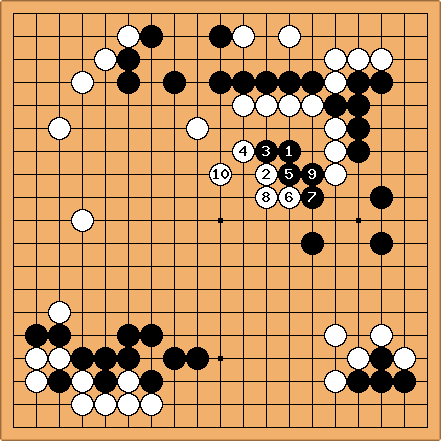 HolIgor: A little profit for black. Now black can capture three white stones but that is peanuts at the moment and is left for later. White's wall came closer to home. 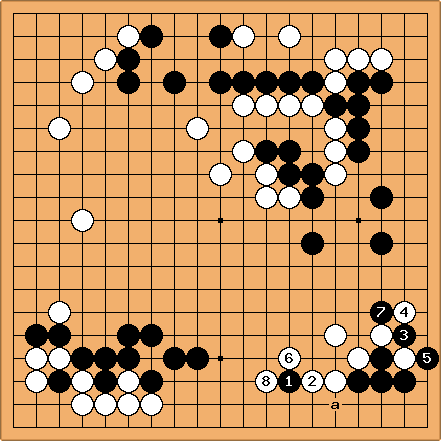 is a move I do not understand. Actually, I don't understand anything in this corner. I don't even know how to read such things. Playing a lot of nozoki to make white heavy seems reasonable.

seems to create a miai. Black threatens to connect at a. If white cuts the connection then black has to capture a stone, make eyes and

would be useful to get something at the bottom. This plan seems logical but I don't have a feeling that this is the best black can do. 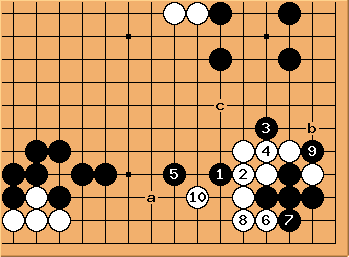 Dave: If we consider a more direct approach like this

, it does not seem that White is without resources. If White manages to play a there is a threat to connect to the lower left. Similarly if White plays b followed by something like c it looks like it both threatens

and connecting out to the center White stones. I assume that White had such considerations in mind when giving up the three center stones in order to build a strong position there. But in reality I can not claim to know what they were really thinking, they look so much deeper! :-) 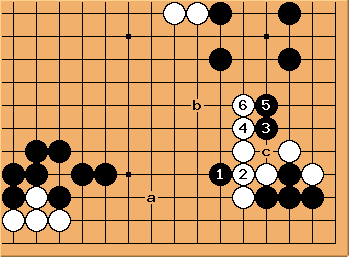 Dave: Also what happens if White does not connect? This does not look like Black making progress. Connecting out via a or b look more likely now than in the previous diagram and

has become a thank you move. The play at c is probably about 10 points in gote? 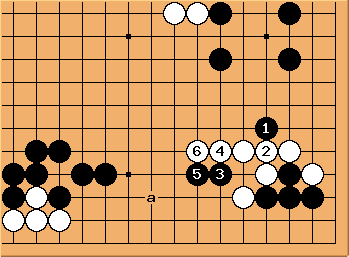 Dave: And if Black tries to change the order of the peeps...

in the game is a threat to the black group in the corner. It is important at this point to determine the status of that group. Let this be a separate page: Fujitsu 17 Yi Wang/Lower Right Status. Without knowing the solution of this life and death the speculations are pointless.

HolIgor: It seems that the study on J group gives ko as the answer. Ko is too good for white. In order to win the ko and live black has to allow white to moves in a row. With that white would easily settle the group outside. Therefore, black plays

exchange finish this part of the game.

is safe. With the next move real fun starts.

settle the shape so well here that I wonder whether

was a miscalculation by Black. If instead

was a clever inducing play because

, I am indeed impressed. Unfortunately I have no way of telling :-)