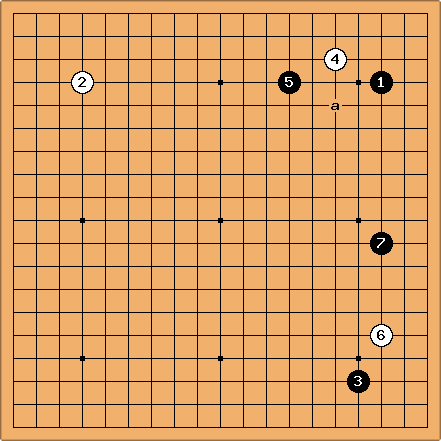 HolIgor: This seems to be hot at the moment. Yi Ch'ang-ho (white) and Ch'oe Ch'eol-han (black) play this in their continuing fight for the supremacy in Korean go. In the second round of the Fujitsu Cup, played 2004-04-12 in Tokyo, Wang Lei Sr. risked to try to contribute his 2 cents. Yi does not do well with this in Kuksu and Kiseong, so Wang Lei could hope to hit where it hurts, but Yi must have analysed this a lot.

in the lower left and allowed Black to play a mini-Chinese. Score = B+R.

is active, white tries to fight for the initiative from the first move.

avoids the mini Chinese with which black did very well recently and, of course, this is a quest for initiative from the very start.

is the toughest pincer that Ch'oe likes to play in his games with the Stone Buddha.

19 games in www.gobase.org, most of them recent and black won 14 of them.

Today's news, Ch'oe won another game with the same first five moves by 2.5 moku and secured the Kiseong title.

a line higher be more in tune with the influence-based

HolIgor: Why, of course, a high approach is possible here as well. But they play this variation every other game recently. I mean Yi and Ch'oe. Black wins.

Dave: The high approach looks premature here. It is difficult to initiate an influence-based strategy when White has posession of only one corner. The low approach is much more common. Charles: On the general question, examples at 3-4 approach, high or low.

seems to be Yi's preferred attempt to steer away from the mini-Chinese (see Kuksu 47 Game 4). Based on the results he has had it does not appear that his problems handling Ch'oe can be solved by simply switching fuseki.

HolIgor: Of 19 games in the database with the same first five moves, 6 went along the line of

. People tried everything including immediate joseki in the upper right corner. But it seems that pros prefer to play tenuki at this point. Perhaps Yi played

as a probing move to see what kind of pincer black would choose before deciding what to do in the upper right.

Of 6 games in the database black won five. Does this move try to reverse this statistics?

Dave: I am not sure that statistics mean anything here because so many of the games feature the same players.

seems odd to me. It offers Black the ideal pincer

a good play. Meanwhile White is divided (upper right versus

) and therefore it is less likely that White finds the time to play in the lower left.

as a new, more aggressive approach by Black to compensate for the higher (6.5 point) komi. Then we would not really expect White to counter with more aggression in turn (e.g.

). Yi has stayed away from the simple jump to a in the figure but I do not understand why. Is this part of the current Korean style?

HolIgor: Interesting that Yoshida writes that after the high close hasami of

. In most games black played a pincer in this corner. Mostly a high two space pincer similar to the one in the right top corner. The situation becomes complicated.

Dave: In the TV analysis, Oya-sensei said that the line with

was experimented with but has now gone out of favor. Current (2004 December) is to play in the open corner after

is just a spoiler). Playing

and having Black answer with the pincer adds substantially to White's burden in the fight in the upper right. When White takes the lower right, then she can decide how to deal with the right side later.