A double-wing formation is a combination of a basic enclosure or a single star point, and two extensions along the sides. 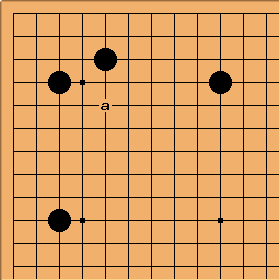 In the conventional usage of the double wing Black has two extensions from a small low enclosure. It looks like a bird stretching its wings along the top and the left side. A natural point for White is now to reduce the framework at a and likewise, Black can perfect his framework at that very spot. 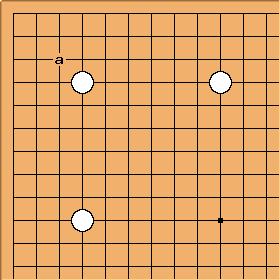 A double extension from a star point can also be called a double wing. This is a much looser formation though. A natural move for Black is here to invade at the 3-3 point, so that one of the extensions will end up somewhat less effective, namely the one that does not serve as an extension from the wall which White will build as a result from answering the invasion.