Preventing enclosures from growing in fuseki

In the opening, don't allow your opponent to get a double wing formation. 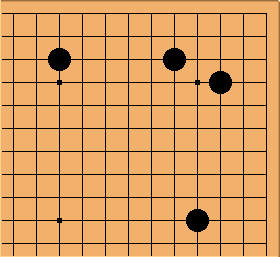 Try to prevent this formation in the fuseki. Usually the wedge on the right side helps, if played early. 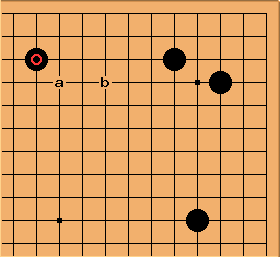 In professional games the upper side stone is usually played one line further away, as shown here. That makes a five-space extension on both sides. Now White typically reduces at a or b.

DaveSigaty - Hmmm... These days I can't resist asking, "Yes, that's what they say, but what do pros really do?!". The tools are available to try to answer such questions.

Charles Matthews The basic wisdom about not allowing your opponent double wing formations around an enclosure is often illustrated by problems with ryojimari positions. It is interesting to use a database also to look at how the pros play such positions, in komi go. It certainly isn't the case that they make it a strict rule to deny the opponent the double wing formation.