Some notes regarding the additions at the bottom of the page: 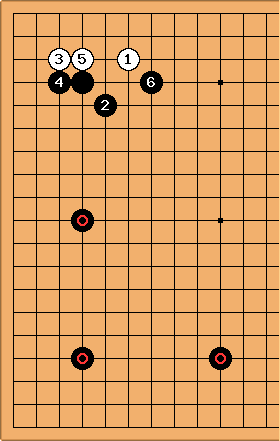 BramGo: I guess it is bad in most situations but if black has a strong position at the left and bottom side it might be good.

move in this diagram has been played in several games of Takemiya Masaki. He played it a couple of times when the 3 marked black stones were allready in place. 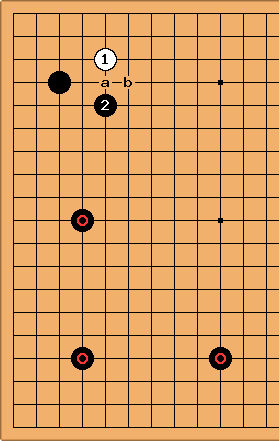 BramGo: So if in the top left corner black is on the 3-4 point it would probably be good as well. Allthough I have never seen this position before, and it is not likely to appear, I think now

Note: A GoBase search for this pattern does not find any matching games. It may be the position of the Black stone on the 3-4 point is inconsistent with the Black double wing formation in the lower left and therefore does not occur in professional play.

zinger: If it did occur, it seems more likely that white would approach at a or b than

Velobici: Agreed (regarding White a or b). Many of the Black stones are high and moyo oriented, so a high approach should work effectively to limit that potential. Bob McGuigan: I think it is worth pointing out that Mr. Yang's book discusses a move in isolation, with no stones nearby on the sides. Almost any move could be good or bad depending on the whole board position. So you could concoct a position in which the move Mr. Yang criticizes would be a good move and that would have no relevance for the position discussed in Tricks in Joseki

Dave: Well, I think it is worth pointing out that this move is not joseki in isolation. It is essentially never seen without stones nearby on the sides. Should the book have been more accurately titled Tricks in Non-joseki? :-) Unfortunately the use of joseki in English (and notably on SL) has too often been corrupted to mean merely "plays in the corner". Call me old fashioned but I prefer Ishida's, "Joseki are model sequences in the corners and, sometimes, on the sides. Sequences consisting of rational moves and giving an equal or near equal result are recognized as joseki..." (Ishida's Joseki Dictionary, emphasis added)

Velobici: Dave, I agree with you regarding the Ishida definition of joseki. Perhaps Mr Yang's book should have been entitled Refuting Tricks in Joseki ??

Bob McGuigan: OK, I agree with Dave, too, as to the meaning of joseki. I don't think Mr. Yang would use the word joseki for the move inquestion. The point of the book is how to take advantage of non-joseki moves. The moves in question are just bad moves, of the sort amateur players play from a lack of understanding or, maybe, in an attempt to confuse their opponents.