End Up In The Center

In a well-balanced game, the corners and sides are soon taken, and it is natural to ask 'where now'. As you can probably guess, the obvious answer is 'the middle'. So far so good, but the question still remains 'how', and 'where'.

First off, let's look at the how.

Extending into the centre should be done from an already stable group, and should take care to stay connected to that group. Therefore, the main methods of extending are the diagonal connection, the one-space jump, the keima and the ogeima.

Now for the where.

To decide where to extend into the centre you will need to look for an area which extends your territory the most, and reduces (or hinders the expansion of) your opponent's territories. 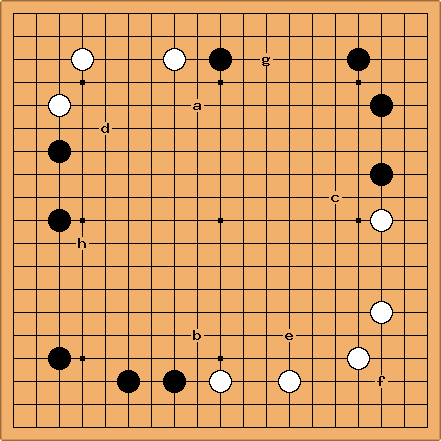 Firstly, in general, you should extend along the line which separates your territory from your opponent's. With reference to the diagram, this means that plays at a, b, c and d are good plays. Again from the diagram, b or c seem to be equally big move for both.

It should be easy to see that no other extensions into the middle (e.g. e) have as much an effect as any of the above. (Mind you, playing at f, closing the corner, may be a good idea for White.)

Looking at the diagram, Black has made the better opening, although both players have played strangely to allow their opponent to get the double wing formation in each corner. Both Black's top edge and left side are still open to reduction/invasion, and White's lower right is still open to, for example, a play at f.

Bill: Indeed, an invasion, such as g, or a reduction, such as h, is probably White's best play in this diagram.