This is a position from a game I recently played on IGS. I was playing Black, and it is my move. Although I think I come out well for almost all sensible moves, what are the optimal moves? --BlueWyvern 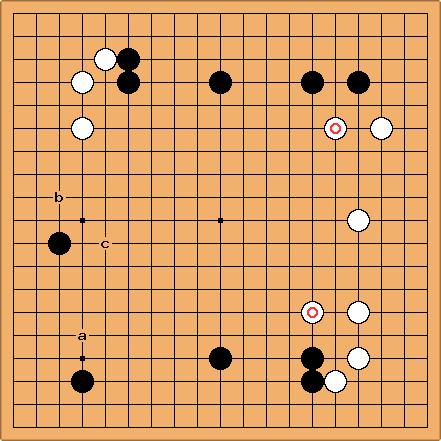 In the actual game, the sequence went Black a, White b, Black c.

DieterVerhofstadt (EGF 1k) : Black's upper side, although more vulnerable, roughly compares to White's right side. Black's gigantic double wing moyo, is not nearly matched by White's upper left. Black a and c are the best moves for Black.

Whatever White's previous move was (I suspect one of the marked ones), it should have been at a.

Actually White was playing rather oddly, here are the last ten moves, but that's a whole 'nother can o' worms. --BlueWyvern 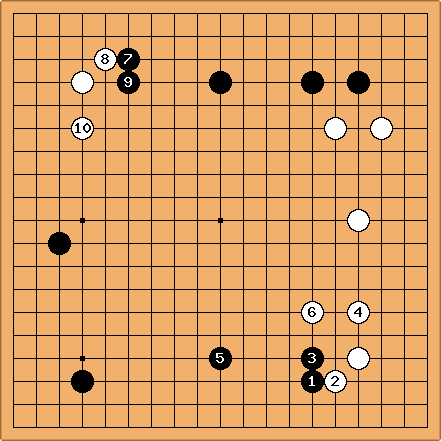 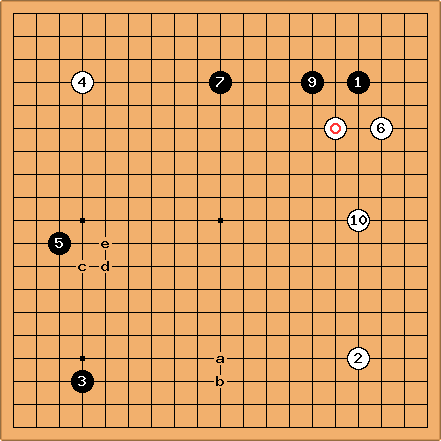 DaveSigaty: First of all, let's go back one step. I guess that the marked stone was White's last play. This is neither urgent nor big at this point in the game. White falls badly behind when Black plays first on the lower side. The marked White stone should have been used at the bottom. A play at a or b instead, for example, would effortlessly expand White's area of influence and leave White in a comfortable position.

BlueWyvern: Whee! Once again we get sidetracked from my original question! It's OK though, I enjoy it. For reference I've added the first ten moves, with 8 being the marked stone.

Dave: Actually I don't think this is getting sidetracked :-) You asked what are the optimal moves but this is not an interesting question. Are you asking how would Yi Ch'ang-ho or Cho Chikun have played against your opponent? What is the point of that? Better, in my humble opinion, to ask what were the problems with my opponent's plays that I should have recognized and what were the problems with my plays that I should improve. Just my opinion of course!

BlueWyvern: I asked for optimal moves mainly because I was hoping for some examples of moves and the reasoning behind them. Most of the time when I am looking for an answer, I am looking for the thinking behind it, so I can see how different people approach problems, and to help synthesize a method of my own.

DaveSigaty: What was your thinking behind Black 5 and 7?

BlueWyvern: My thinking behind Black 5 was that I wanted a faster development then a shimari to discourage my opponent from approaching the lower left. Even though there is no additional stone for support as there are in any of the Chinese Fusekis, I was under the impression that it could still be OK, because should White approach, 1) I can play tenuki if I feel like it, given that I already have a pincer in place. 2) If I respond, I am two moves ahead in the area, and White probably can't afford to tenuki, and, most likely, I will end the corner situation in sente. 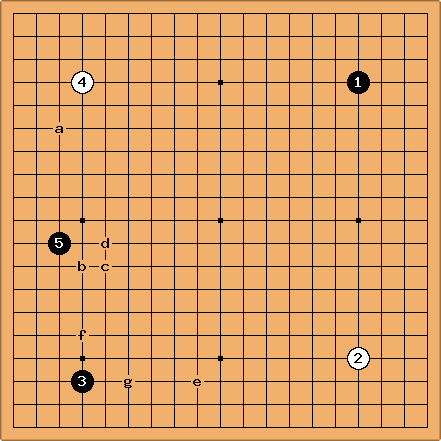 The shape with 3 and 5 is one we see in the Chinese Fuseki or the mini-Chinese (Small Chinese Fuseki). However, the power of the formation in those fuseki comes from its relation to a third black stone either on the upper left hoshi (Chinese) or an approach to the upper corner around a (mini-Chinese). Without the third stone the 3, 5 combination is not so forceful. White can approach the 3 stone easily because she can always use plays against 5 (for example plays at b, c, or d) to settle her stones. In this position she does not mind making 5 strong because there is no related black stone in the upper left to benefit from building strength around 5. If Black approaches the upper left after 5 becomes strong, White chooses plays that aim at making Black overconcentrated.

If instead of approaching the corner, White plays along the bottom side and Black makes a shimari with something like the sequence White e, Black f, White g, it looks as if Black has chosen to extend from his shimari in the wrong direction and allowed White to outplay him on the lower side. 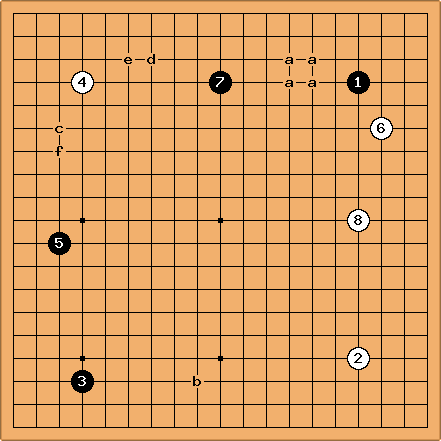 What was your thinking behind Black 7? It seems too far away, to me. It leaves the choice of how to play in the upper right to White. This should not happen because it is Black that played first here.

BlueWyvern: Here's my thinking behind Black 7. I feel comfortable dealing with the double approach, and with 7, even if White tries a double approach, I can still choose to make my strong fight on the upper side, as I now have an additional stone up there. That is the reasoning that I feel fine dealing with the consequences of playing Black 7. The goal in playing Black 7 was to cramp White's upper left corner. Black five already hinders one direction of development from White's upper left hoshi stone, I was aiming on hindering the other with Black seven.

White may want to play at one of the a points, turning Black 7 into a pincer that White answered with a double kakari. The point is that White is given the choice of which a point to play, and therefore of the relation between the pincer and the pincered stone. This would not have happened if B had chosen to pincer W 6 directly. Then it would be Black that chose what pincer to use against the approach move already played by White.

White might also want to lay back with 8 as shown here. This leaves Black with the problem of bridging the gap between 1 and 7. If Black does so with a play at one of the a points, White has time to turn to something like b on the bottom. If Black plays elsewhere, White then splits 1 and 7 and can look forward to an easy time in the fighting since she has strengthened the right side with 8. In the game, White very kindly forced Black to play an additional stone. This was a real thank you move that solved Black's problem and gave him sente to play at the bottom.

BlueWyvern: Had White played 8 as shown, I probably would have made an approach from c or f, then linked at one of the a points. If White plays b at the bottom, she would have one double-wing formation, and a small corner, and I would have two large single wings, which seems to me to be about even, plus I would have sente for first invasion, or perhaps a move in the center, which seems like it would be a vital moyo point at that stage.

Incidently, I think that after 5 and 7 are on the board White should answer an approach move in the upper left with a large knight's extension (answer c with d or answer e with f). A stone at d threatens to undercut 7 while a stone at f leaves no room for Black to extend from 5.

Notice that almost all of the comments on Black 5 and 7 are in terms of what White can do. Why is this an appropriate way of analyzing Black's plays? Because whenever Black plays, White plays next. Hey, we already knew that right? :-) But time and again we forget what that really means - the opportunities that we give our opponents are more important for analyzing our moves than those we build for ourselves, because the opponent always gets to play next! 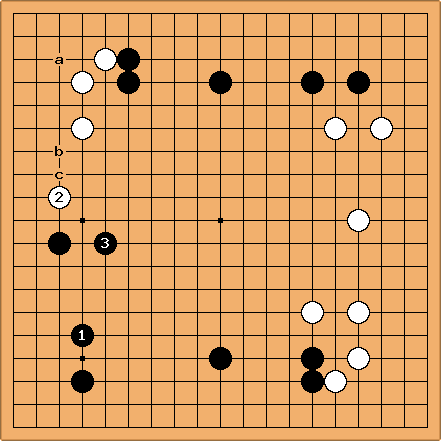 Looks like everyboday else is dodging BlueWyvern's question. (We call it sabaki, hehe!) I'll just say that Black 1 to 3 would be a good choice. White 2 still leaves the possible of entering the 3-3 point at a, and the invasion at b, although there is no need to play there immediately.

Alternatively, Black 1 could be played at c. But Black 1 in the diagram makes the game easier to play for Black as Black already has the upper hand.

As for Dave's advice, I put more emphasis on what I threaten, and worry about my opponent's play later. Just call me Mr. Sunshine. ;-)

For example, the two-space extension/kakari at c is big because of what it threatens. (I still play the shimari at 1, though.)

BobWhoosta: As in the diagram below, I strongly prefer playing at

directly (as opposed to playing at a). It's a more complicated game, to be sure, but since white already forced black into his ideal extension on the bottom by playing the contact play on the lower left, I feel

in the diagram below develops the position much faster, and makes a white play in the developing moyo inherently more dangerous. Is this the wrong way to think? I see how playing a first allows the entire board position to settle in black's favor without any difficulty, so is there any other reason

could be bad aside from entering into possibly unnecessary complications? 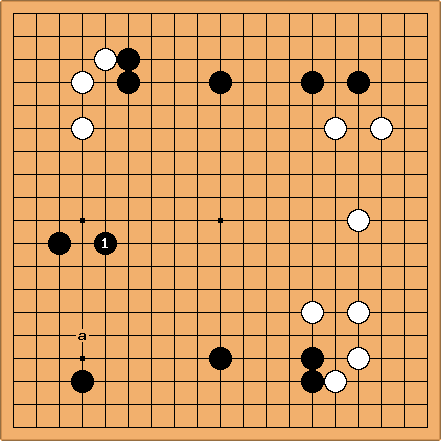 kb: Corners, then sides, then center. How would you handle 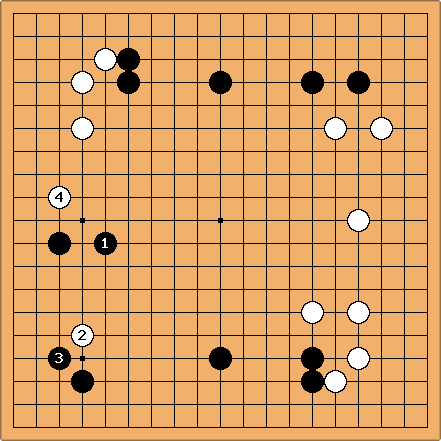 To keep things simple, what do you think about the

exchange? Who is it good for?

is a passive move. Thank you.

Bill: Well, I don't know whether I have gotten better or worse over the years, but now I kind of like this play. :) 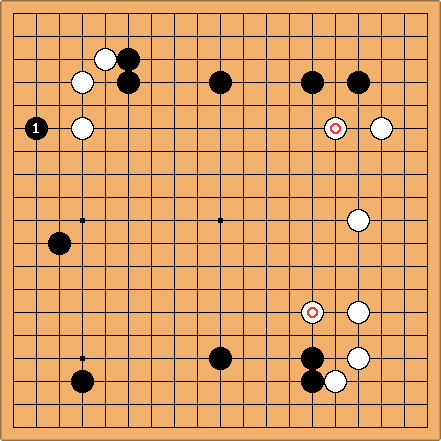