Thought I would share a fuseki that I have been using a lot lately. I was losing often as Black when I started trying this new fuseki. I'm not sure if it is already on Sensei's Library but would appreciate comments from stronger players on it. (I (Browncow) am about 10k AGA.) 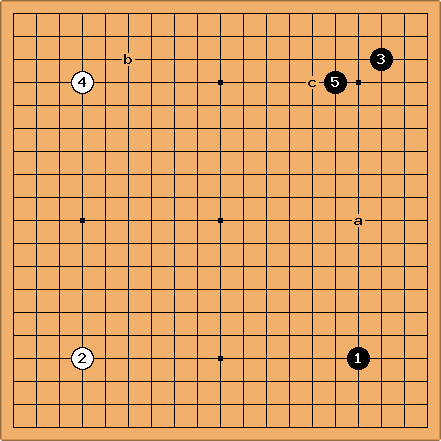 After this White usually plays at a, which is also an ideal point for Black. If White does play a then b seems an equally good point, working well with the enclosure to the right. Please anyone, feel free to comment on this idea or present weaknesses in my thinking. -- Browncow

exswoo: Since the main idea behind a 3-3 opening is to settle a corner in one move, wouldn't Black want to approach White directly with

instead of an extension?

Looks overconcentrated to me, wouldn't c be better? ~srn347 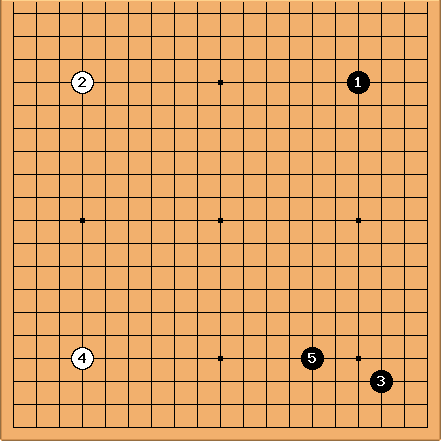 The 3-3+knight fuseki is interesting. Black 3 gets corner territory, while Black 5 makes an attempt at securing territory along the bottom, as well as some right side influence. However there are some weaknesses in this fuseki. (continue reading) 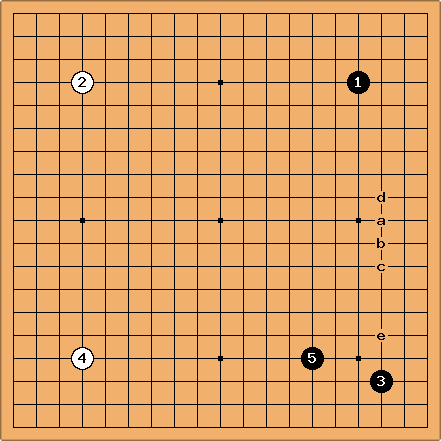 There are many ways for white to respond to blacks 3-3+knight fuseki: The most popular responses are A, B, and C. C seems like an akward move, but because of that low 3-3 stone, white can still make a base easily with moves like D and E. For me personally, I think I like A best here. 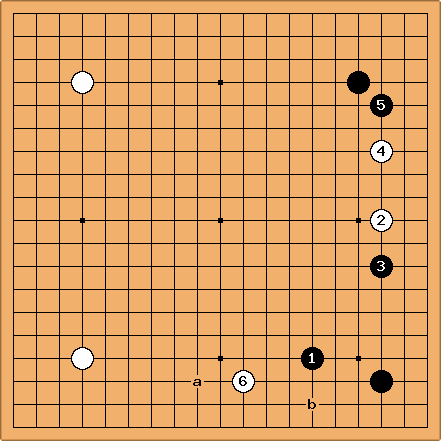 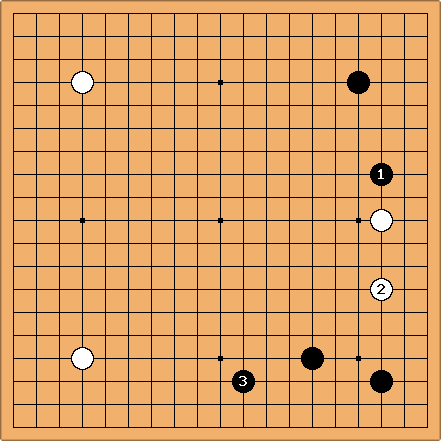 One might suggest, "how bout pushing from the top instead of the bottom?

Black makes a base in the lower right, however his shape is considered to be slightly inefficient and slow in the opening of the game.

But personally though, the Orthodox fuseki seems to be a better fuseki.

looks a little slow to me: 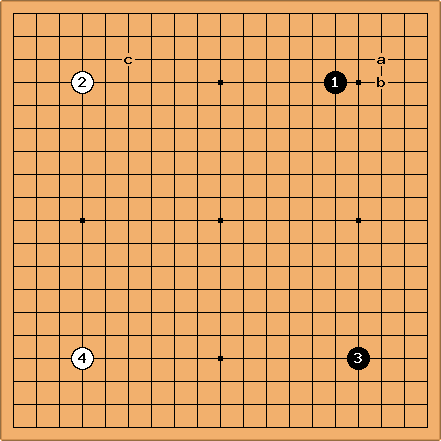 If Black plays a, the position transposes to the previous one. However, it's pretty clear that Black would rather have that stone at either b or c here (this is a kind of very simplified tewari analysis).

I'd wedge a point lower on the right as White, expecting something like the following to happen: 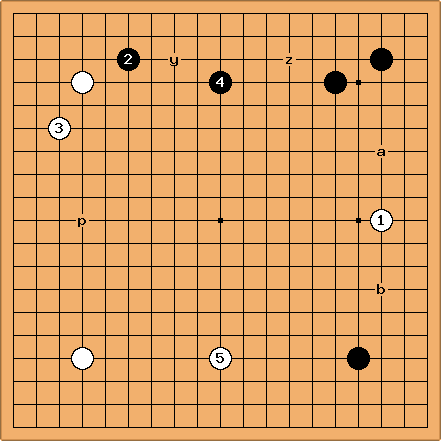 As White, I'd regard a and b as miai, and be happy that there are very serious invasion points at y and z: Black really hasn't enclosed any territory there yet. Black p might be bigger than 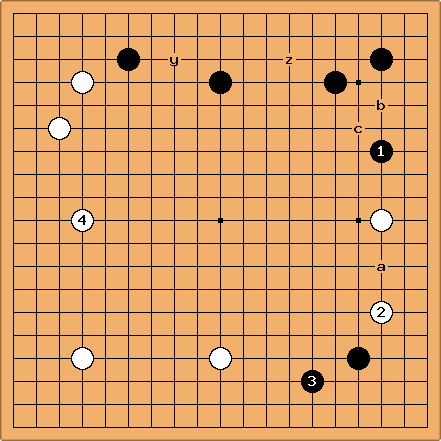 White has a nice framework on the left, and the "enclosure" in the upper right still has major weak points around b and c. The invasion at a is less serious for White, who can invade the corner and then pull out the central stone without doing too much damage, (among other plausible continuations).

I don't think any of this is devastating for either side, but White's position is definitely pretty reasonable. I'd be very happy to play White here. 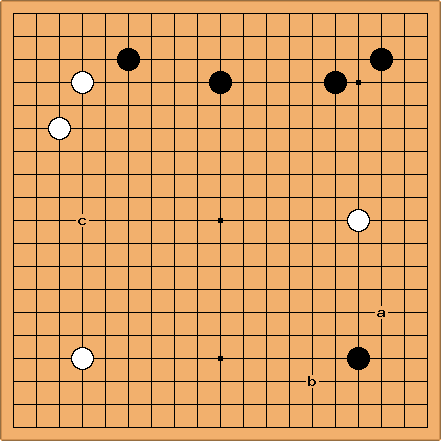 Yes, the situation is not looking so bright under your play. My opponents have usually played much more passively, allowing me to develop quickly. Here for instance, playing a non-urgent approach to my 4-4 stone at a or b. Or sometimes even more passively, building their framework on the left at a. Thanks for the help. Under a slightly more aggressive (intelligent) pattern White, not Black, seems to get the advantage. 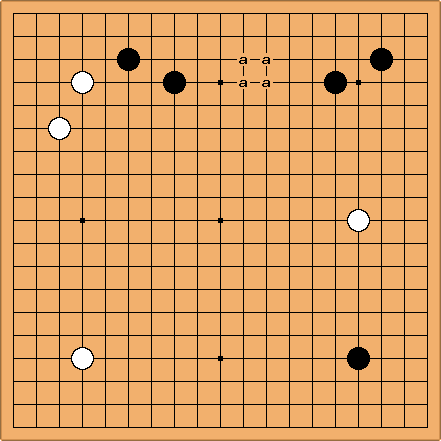 Do you, or anyone think that Black gets a better result by playing like this and allowing White to invade between Black's two pairs of stones around a? Or is this even worse, forcing Black to defend both pairs at once.

Thanks for the help. -- Browncow 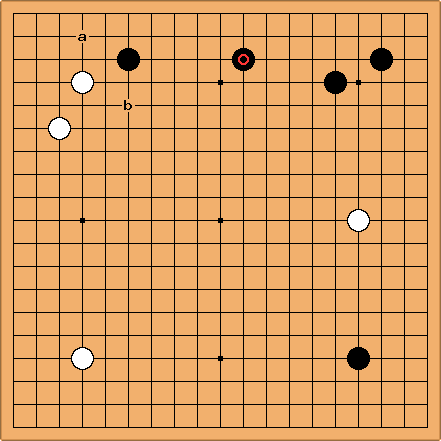 on the upper side is preferable. Then Black can really take the upper right corner to be territory. Black can later play at a or b and develop in a balanced way. Charles Matthews

Going back to the original question... what about 5 at a, for something like a sanrensei with a strong corner?

AJP: Which would you like, territory or influence? You can't have both and if you try you generally wind up with neither. The sanrensei both invites and expects a corner invasion by white. After that happens in the upper left in the diagram below a stone at a is going to be too close to strength black makes walling off white in that corner. Note that it's not possible to make a strong corner (secure territory) with just one more stone added to the outside of a 4-4 stone, and another stone added inside the 4-4 (at 3-3 for example) is horribly inefficient. 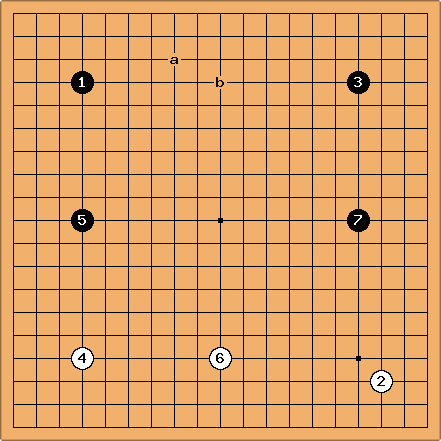 A game I watched recently between AGA 1k players. White 8 was a wedge around a or b, I forget where; White won by 20 points, though crediting it more to Black's "bad" opening than his own good one.

erislover: I enjoy opening with one hoshi and one san-san as both white and black. I find the 3-3 to be "solid" when I play black and "fast" when I play white, so it is attractive to me. Additionally, the most severe approach from the 4-4 point still allows you to safely tenuki (it then becomes the normal 3-3 invasion joseki). Here is my preferred opening as black: 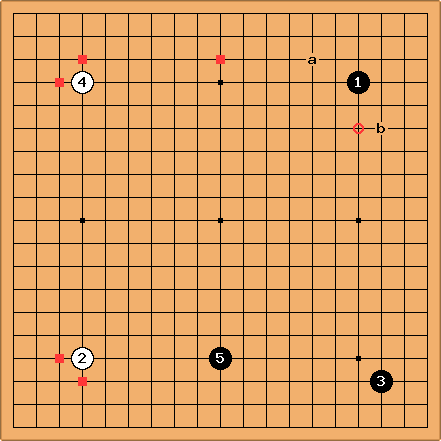 I've found that black 5 makes a nice launching point for either developing a nice moyo or approaching the white corner. White 6 usually helps guide my longer-term strategy. In the games I've played with this, white usually likes to approach at either a or b. I almost invariably pincer with the b approach, while I would tend to play the circled point with the a approach. Incidentally, Browncow, we are about the same strength (I am 9-8k AGA). --erislover

feels like a mistake in direction. The whole point of the 3-3 point is that it gets the whole area over and done with in one move. There isn't much potential for either player in the vicinity. The squared point on the top side is much bigger for both. How about this next diagram? 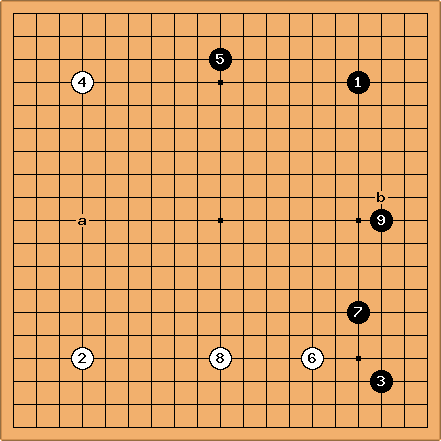 could also be tenuki, perhaps at a or b

Batavia? I don't think white has a miai after playing on the right side. If i look at the diagram below i think black should push right away. 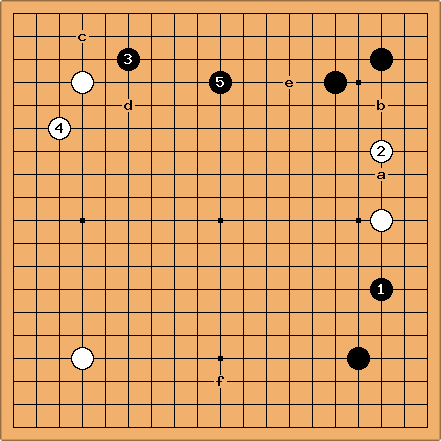 AJP: seems the wrong direction for black. In general black would like an extension from his shimari rather than pushing white into it. In the diagram here it is white who has all the profit as all of black's positions are invadable. White's position on the right is going to hurt what black can get for any influence he'll get on the top sealing in a white invasion there. If black's going to push, he could push down from his shimari and then play at

Alex: This is an interesting question. I'm kind of ambivalent about it. Certainly, if Black had a more conventional shimari in the top right, approaching from the direction of a would be correct. Here, since it is based on a 3-3 point instead, maybe

has some merit. It certainly makes White feel a little out of position; she'd prefer both her stones to be one line lower, since that would increase the threat of invading the lower right corner and leave room for a second two-space extension to b. On the other hand, approaching from above still feels good, even though the shimari is weird. So maybe it isn't so cut-and-dried either way, which would imply that Black might want to defer approaching until he knows which way is better.

I'm also not sure about

. Maybe the slide to c would be better. I'd be hard pressed to explain exactly why, but my feeling about

is that the resulting position on the top side is neither tight enough nor ambitious enough. It's in the sort of middle ground between a resilient, semi-territorial moyo, and a big, nebulous, speculative one, whereas I usually prefer to see positions that are one or the other. Imagine White exchanges c for d. White has a lot of territory, while Black's only real prospects are on the top side, but he is left there with an open skirt and an easy invasion around e. If he plays to defend against the invasion, White will get the last big point at f.

Batavia?: the 3 5 combination is good for fighting. In fuseki's such as the kobayashi fuseki is it used. This isn't territory, it is influence so if a fight breaks out black will profit from it.

are a joseki. I wasn't saying they're bad locally. I just don't think that particular joseki pairs well with the shimari in the top right. In the Kobayashi fuseki, the situation in the top right is completely different.