In The Beginning / Study Notes

When a group's eye shape consists of a line, of unoccupied spaces, three is the critical length.

Six stones in a row on the 2nd line die, but eight stones on a row live.
In the corner four die and six live.

Eye shapes of four or more spaces in a row are alive.
But when spaces are not in a row, the shape may be unsettled or dead.
Some shapes: Straight four, Bent four, Bent four in the corner, Twisted four, Squared four, Pyramid four, Crossed Five and Bulky Five. (ref EyeShape )

Of the six-point big eyes, only the rabbity 6 and rectangular 6 in the corner can be killed.
Shapes of seven spaces or more are always alive.

The rule for two space notchers is "Five die, Seven live" or "Six is unsettled".

The rule for a three space notcher is either "Four die, Six live" or "Five is unsettled". 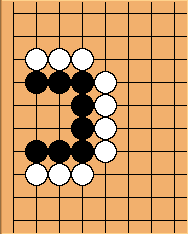 The door group with one extra leg is unsettled.