Five Stones on the Second Line in the Corner

As detailed in James Davies's Life and Death, five stones on the second line in the corner is the critical length and lives or dies according to sente. Shorter string die, longer strings live. For groups of stones on second line away from the corner see Six Die But Eight Live.

Alternatively, b is also a vital point in this shape. A play by black at b forces white to make a bigger eye than otherwise necessary, which is a common strategy in life and death problems.

There are two more shapes that might be referred to as bent five on the second line in the corner. One shape is symmetrical, each leg of the bent five having two stones; the other shape is asymmetrical (called Long L below), one leg having three stones and other leg having one stone. 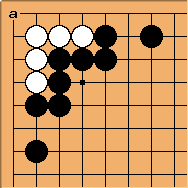 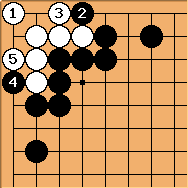 Although black can play hane on both sides, blocking will allow white to keep two eyes. 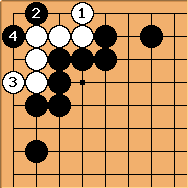 , the result is a bent four in the corner, and white is dead.

Normally, White can play at a to live with the maximum number of points. and Black can play there to kill.

On the rare occasion that both

to start a ko. If