The rule for one space notchers is: "Four die, Seven live". You may also remember this as: "Five and Six are unsettled". 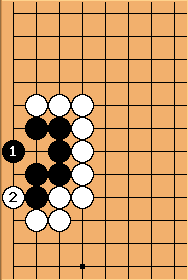 Here's the proof that "Four die". Even if Black plays first, White always has an answer to keep his group dead. Black 1 is answered by White 2 and vice versa. 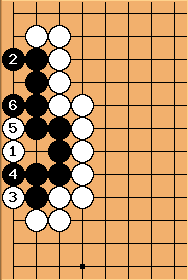 Here's proof that "Seven live". Even if White plays first, Black always has an answer to keep his group alive. The diagram shows one white attack that fails. You can verify for yourself that it doesn't matter where the notch is located. You can also verify that five- and six-space notchers are unsettled, i.e. that the black group is alive if Black plays first and dead if White plays first. If you don't know how to verify unsettled cases, look in the discussion of two space notchers.

See notcher code for the coding.

Black can make a ko

Black can make a ko

Black can live. White can kill at 1.

Black lives. White 1 is the strongest move. Any other move is answered by Black 1.

Black lives. White 1 is the strongest move. Any other move is answered by Black 1.

The status of 116SW depends on outside liberties.

With a outside liberty, Black lives.