moved from plays against low chinese opening; there is some valuable content in here which may be moved back, but it is mixed with low level amateur guessing and tactical variations which are not backed up by stronger players 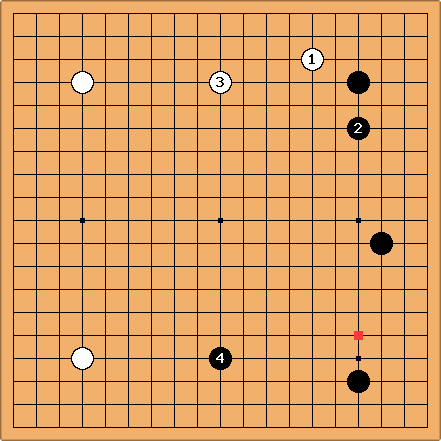 Recently I often have to play against the low Chinese opening. Somehow I am always doing badly. What are good counter-strategies against this kind of opening?

Usually I play the sequence

but I'm not too happy with it as I have to invade around the marked point sooner or later which never turns out to be quite satisfactory.

connects, White 11 at a.) I suppose it depends on your playing style. I often find it difficult to manage my own or reduce my opponent's large territories, so I find myself often trying to play a fuseki which gives more, and smaller, groups. Therefore, I would typically play what you call the invasion instead of the extension to a on your diagram. At my level of play (10 kyu) a sequence like the one shown might follow, which leaves me as White quite happy, although in gote. If White later regains sente and is allowed to complete the lower side (e.g. b), White should be very happy. -- Morten Pahle

To Morten Pahle: I have made a comment on your reaction in Ten Kyu Nadare. However, a first remark will be that c rather than

is Black's normal answer in the Chinese Opening. That way the stone at 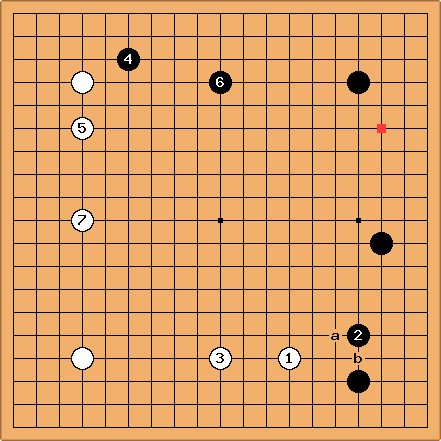 Although I will usually play the same against the Chinese Opening, if you are not satisfied with the result you can play as in this diagram (of course both White and Black have different choices which are good). The advantage of this sequence might be that invading at the marked point here gives you slightly more room to work in than the invasion at the marked point in your diagram.

I might add that in Go World this variation is listed as the more usual way of playing for White (I prefer it as well). For Black, I can't say I particularly like

. Approaching the bottom left corner (forcing White to play in the area which is open at the bottom) or making a splitting play on the left side seems big. After

As a weak player, I have a question about this position. It seems that as black gets sente, he could for example play tengen to ruin the influence oriented position of white. It seems that the white territory is more open for invasion than the black one. I would not be satisfied really with white. If white then makes the mentioned invasion at the marked point, she will get a cramped group compared to solid territory for black on the top. What do I miss?

However, in my experience this is not the more usual way of playing for Black. When you play

you have to be prepared for Black to reply at

instead (I have found this the more common answer on IGS). Responding by playing at

is a bit problematic as the stone at

gives Black good fighting resources here. Alternative plays at a (trying to handle the original stone lightly) and b (willing to settle in the corner if necessary) are possible. -- Dave Sigaty 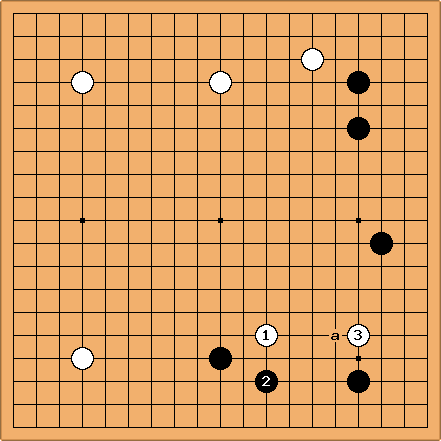 You don't have to invade quite so deeply. I've played this combination to break up the moyo before, which I got from The Chinese Opening by Kato Masao. Alternatively if Black plays

. He also suggests a reducing move like a. -- BlueWyvern

Kato also comments that answering at 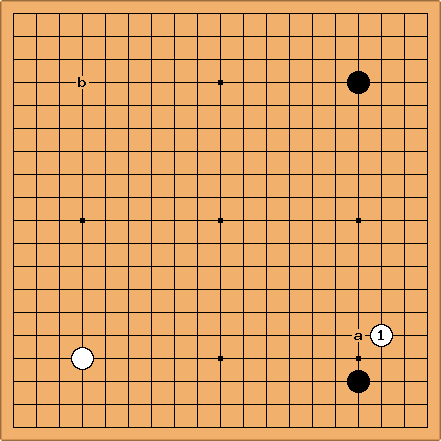 For people who do not like playing against the Chinese Fuseki (and the Kobayashi Fuseki as well) the first question is why not play an immediate approach against Black's komoku? As soon as Black plays in the lower corner the most likely result when White plays in the upper left is some version of the Chinese. So if you don't like it, what argues against a pre-emptive strike now with

Why feel that playing in the remaining corner is the only choice? Consider the "Shusaku-style Fuseki". It would not exist if White had not been ready to leave the last corner empty in order to challenge Black immediately and prevent him from forming a shimari in the upper right corner. This type of aggressive play was common when White received no komi.

I prefer the idea of playing

instead of a in the diagram. If Black plays in the upper left around b, then the situation reverts to my own hoshi mokuhazushi strategy - how could I argue with that? 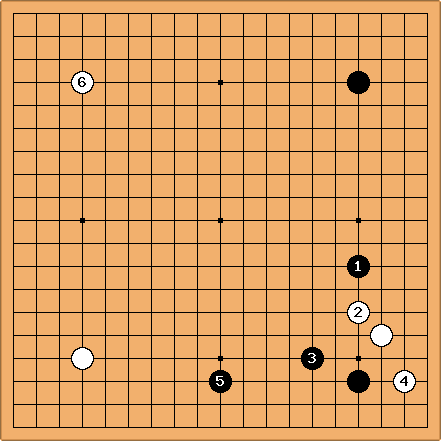 If Black responds in the lower right, then both players are interested in taking sente in order to play first in the upper left. One such example is White's choice of

here in response to the pincer at

. It is a common joseki that aims to ending in sente and provide support for the later invasion of the upper right side. If Black responds with one of the common patterns at

, White's wish is fulfilled when White plays first in the upper left. There are many other choices for both players but one thing that Black certainly cannot do is to revert to the Chinese Fuseki! 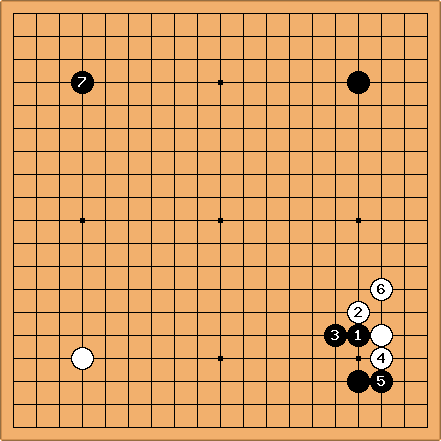 I dislike white's low approach because then black could answer with this typical Joseki which ends in sente for black what lets him play in the remaining corner. White seems behind to me now. Playing Tenuki earlier doesn't feel look good for white, too. The high approach move is more flexible and thus playing tenuki is easier for white. Is there a fault in my thoughts? -- Basti 17k IGS 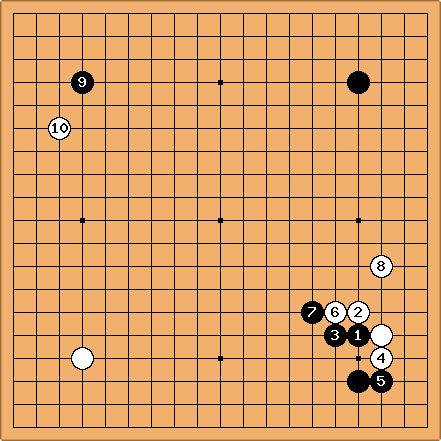 DaveSigaty: Naturally there are a lot of choices that Black (and White) can make here. However, there is a reason that the

sequence is not a representative joseki from the 3-4 point. Black settles the corner on a small scale. White most often pushes at

. The exchange in this corner limits the future of Black's stone in the upper right. The natural desire for Black, looking at the right side, would have been to pincer the White approach stone. 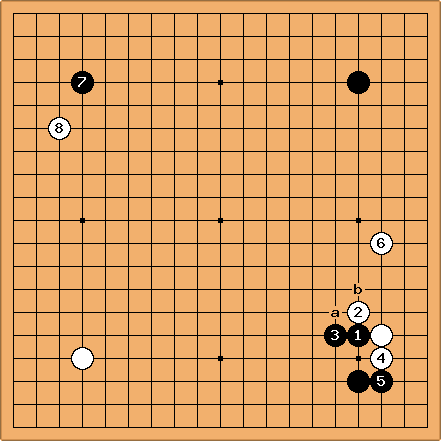 DaveSigaty: White may also simply choose the usual extension at 6, again in relation to the upper right. Black can exchange a for b later in relation to the bottom. This seems to be why playing 6 at a has become more common in professional play. However, in this situation

looks just right in terms of limiting the top. 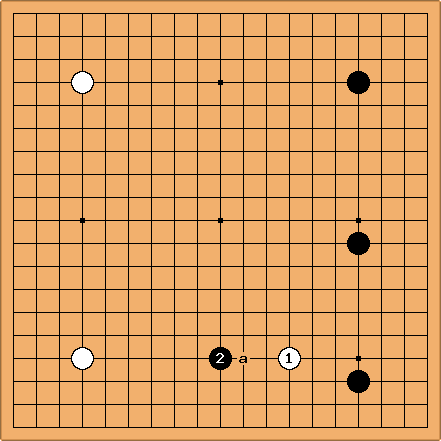 zazie 2k in France : what about this black's answer ?

can be countered by

or a.
In this respect it would be interesting to know the difference between the high Chinese

and the low one b. tapir: I often answered

instead of attaching - what is good for black can't be bad for me. I'm not sure however. 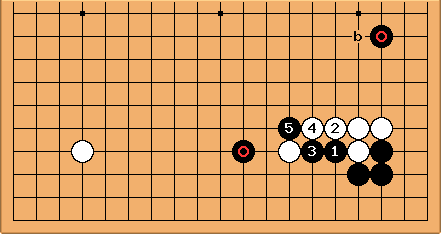 tderz: as an amateur 3 dan (EUR), I played several times the sequence

. Please notice the slight different location of the

. I found one Chinese book quoting this position with "White has it difficult" (could have been on the high Chinese - I don't recall it exactly). However, the astonishing thing is , that I did not find a professional game with these moves. (Checked and searched on gobase, found 22 hits on my starting position). I on game, Rui Naiwei came via a transposition to this position. 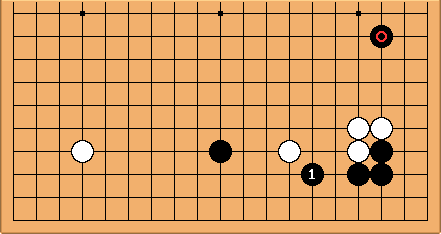 tderz: the professionals almost all invariably jump to 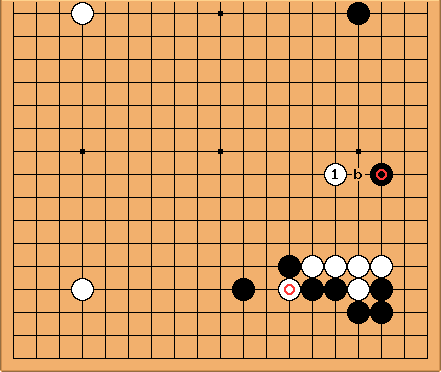 tderz: White could stay light with

, ony thereafter deciding how to deal with

I could assume that

being at b (high Chinese) makes life more difficult for White. 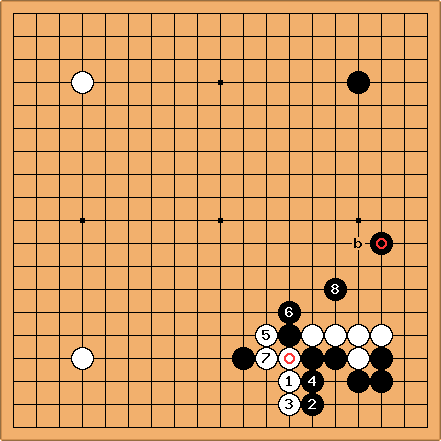 are heavy (by having been played), they must be protected with

, not before the right group has been weakened by the atari

.
This would be a typical amateurish sequence.

tderz: I would like to know more about this move (after some preparatory moves c-d-etc.) and its continuation with kosumi to 2-2.
Who could write something here? 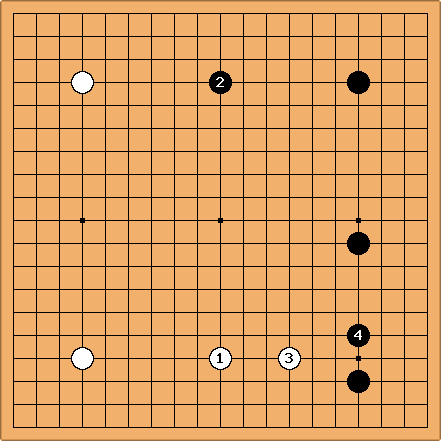 In older time white play 1. If black play 2 this is a normal game. 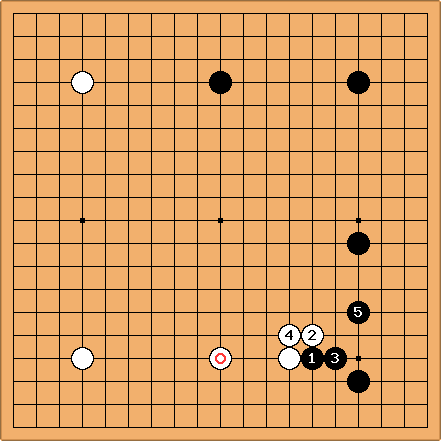 But Rin Kaiho invent 1. After 5, the marked stone is too near at the wall. 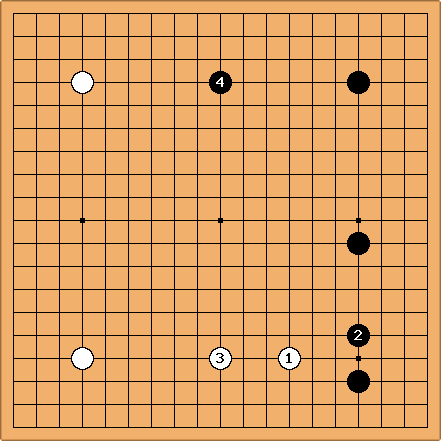 It's because now the strong players play 1. If black play 2 it's a normal game. But what about the answer in 3 ? zazie, 2 kyu in France

Tamsin: Here is a recentish idea that Alexandre Dinerchtein showed me: 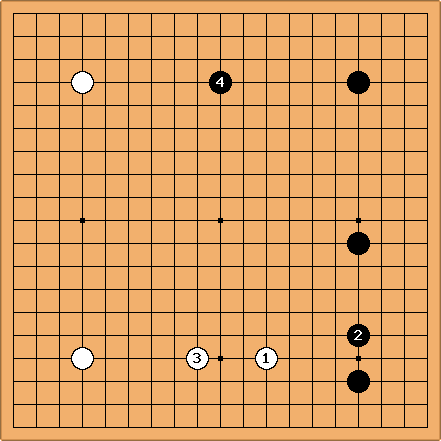 If Black plays a pressuring move against 1, White can play the same way, and look forward to invading later in the corner: 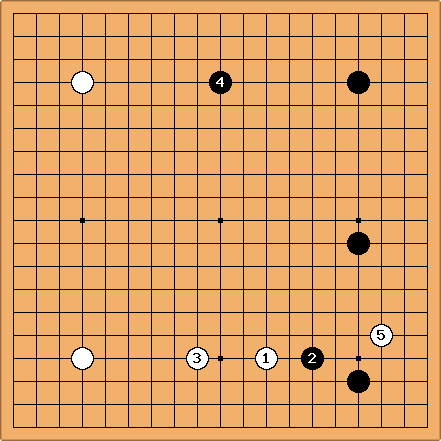 Because 1 is that much farther away from the corner, White has room to settle comfortably, as in the following sequence: 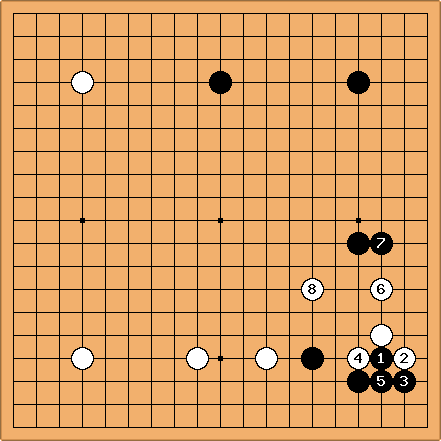 If Black attacks by preventing White from making a base on the bottom, then White can play like this, getting a thick shape: 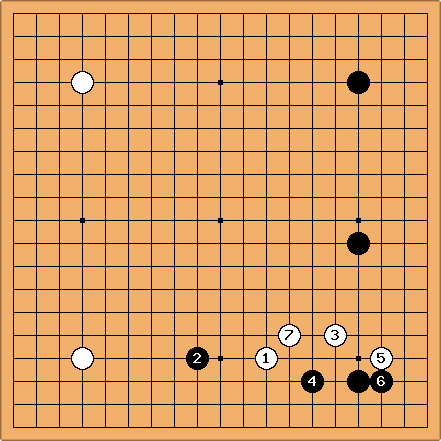 Finally, if Black takes territory in the bottom right, White builds thickness and puts pressure on 2 as shown below: 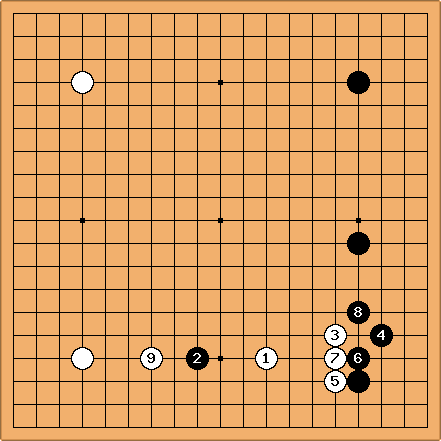