This page was originally called IGS 5k against low Chinese 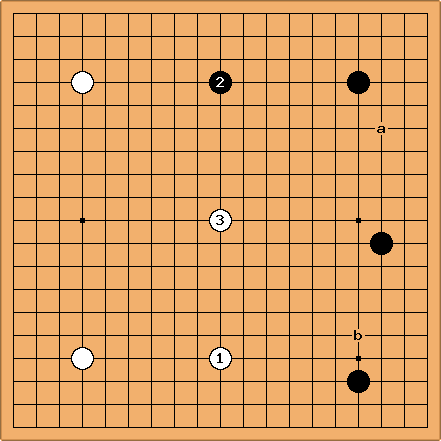 is to stop the opponent's moyo. I remember the nightmare when I played against Chinese fuseki for the first time. Thank you very much. I was almost a novice (about 5k European) and the opponent was 2d.

usually. If he plays kakari you can play a pincer and the moyo does not emerge on that scale. White 3 is to reduce his moyo, but he does not know about it. At the moment he is concerned with me taking another star point on the left side. So he plays on the left. There is plenty of room there, so he settles quite easily, but I make some useful moves too. After that it is my turn to reduce the right side. Tengen helps a lot.

What is the result? I win some. I lose some. I used to win more than lose at 5k level, but recently I promoted myself to 4k level and now I lose a little bit more.

What would esteemed dans say?

PS. I play 90% of my games with White. I like to play White. When I started playing go, it was so nice to get five stones from the opponent. At least I have those, thought I. And in a case of a tie I win :). This has a strange effect, when playing Black I cannot estimate who's leading. I lost several games that I thought I was winning. All because of those five stones. Now, I feel that I have to have a very big lead with Black, which makes me play too greedily.

I find this interesting, and can't say that it's not good. Subsequently a and b are miai, and

is already there to reduce Black's moyo.

The normal way to play would be to play on the left side with White 3. I think that that would also be better, but not so much as to make your move not a good one. -- Andre Engels

HolIgor: If I play on the left then Black plays tengen and his moyo building strategy continues. That's what he wanted when he played any of those one-sided fuseki, that's what he was prepared for, while I want to avoid this development. But you've got the idea.

I also think this is quite an interesting idea. Many people feel uncomfortable facing the Chinese fuseki and try to think of ways to avoid diving into the framework. Playing at tengen changes the effect of plays along the sides in interesting ways. I haven't tried this yet but I can imagine that it will invalidate many of the standard exchanges that Black has come to expect in the low Chinese.

By the way - would you be comfortable playing

in your diagram and take

? In other words do you consider

HolIgor: No, I would not. I feel that limiting Black on the side with komoku is more important than on the other side (you have a san-san as the emergency measure). And as I said, the timing is important for me. At this moment Black is more concerned with White's possible move on the left side than with defending his moyo, because White threatens to build even on larger scale.

Another important aspect is psychological. Now, after inventing my own way to play one-sided fuseki, I don't fear them. I anticipate them, to try this sequence once more.

And let me know your impressions when you try it. It will be against stronger opponents and on a different level. I am curious.