The 3-4 point high approach, inside attachment, hane is the most common response to the attachment. The hane is a natural shape and prevents Black from moving into the top side. This almost always continues with the attach-drawback joseki, although in extremely rare situations Black can also opt to descend. 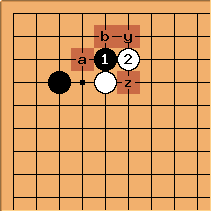 The attach-drawback joseki is played over 99% of the time in professional games.[1] This is the usual response, and it is generally considered correct.

The attach-descend joseki is played less than 1% of the time in professional games.[2] Descending was an innovation of Kitani Minoru, and still occasionally is seen in pro games. It implies a highly territorial attitude, and it hopes to get a better invasion of White's side in the future. However, this move does not receive a good score by strong AI programs when played in the early opening, most likely for several reasons:

When to play the the attach-descend joseki? 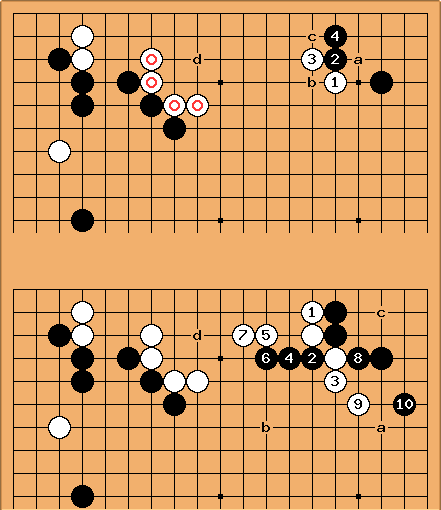 The attach-descend joseki is extraordinarily rare in professional play. While it was common to play this move in the opening for a brief period in the 1950's, the general consensus among professionals and strong AI seems to be that this joseki is bad for Black in most situations.

That said, there are always exceptions, and "inferior" joseki can become a good move in the right situation. One such situation is illustrated by Chang Myunghan (6p) vs. An Kwanwuk (9p) (2017), where Black descended with

as White was developing a moyo on the top side.

In modern games, the descent can be considered when Black hopes to have an easier moyo invasion or reduction in the distant future. While drawing back with

at a is a perfectly good move, Black is worried that White would claim too much efficient territory on the side.

makes miai of the solid connection at b or covering the skirt at c. Ordinarily, covering the skirt this early in the game is not joseki or advised, since playing on the second line is typically a gote and slow move better left for endgame. However, this board position is more of a special situation, since White is thin on the top with a shape weakness at d. The open skirt could potentially be problematic for White, as the extra aji might be enough for Black to initiate a damaging invasion in the future.

In Dia 2, White opted to cover the skirt with

, and Black cut with

to initiate a fight. Both Black and White must manage weak groups in the center, and Black's three stones function as a reduction of White's moyo.

It is important to note that although Black's corner looks big, it is actually not fully secure. Black has a major shape weakness at c, and while it may not lead to anything right now, Black might have life and death issues if they are fully sealed in. For this reason

to make additional eyespace is necessary, and White plays

at a to threaten sealing Black in.

Meanwhile, it looks as if White gained a little strength on the top side. White hoped to fix their original weakness at d without playing there directly, and these exchanges seem to have slightly benefited White. That said, the game is still playable, and Black ultimately went on to win.

Takeaway points: Chang Myunghan and An Kwanwuk both deviated from "joseki" (

covering the skirt), but Katago seems to think both moves are quite reasonable in this board position. All joseki are fundamentally situational, and even unusual moves can be good provided there is solid rationale and reading to support it.