My real name is Kris.

I'm from Belgium, and I used to be a member of the

Go Club in Gent, the city I live in.

Online, I try to play games on

I probably have too many...

When I'm much, much stronger:

Oh yeah, I should also try to review some of the games I play, and maybe read another book. So much to do, so little time...

Go club gent member 20k?: The club may have changed location since the last time you went, the current location is the "chess café". Anyway I might come monday 10/1, I usually always come, but it's the exam period.

uxs: It was there. There was some kind of company new year's party going on. No chess boards in sight, let alone a go board.

Something else: I've been playing on KGS the last few days. Yesterday I lost a game with 10 or so points, but instead of clicking "done" to finalize the score, my opponent resigns. I have no idea why.

Update: rain ! I'd be soaked if I went now. (I use a bicycle as my primary means of transportation.) So it's a no go...

Go club gent member 20k:Rain coat and rain trousers,standard equipment for every belgian biker :).Anyway I was there, nobody came, which was my first time that happened to me in the 3-4 months i've been going to the club. I won't be going to the club for the next month(exams, duh). 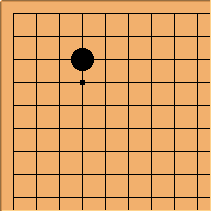 I think the easiest way to explain it is with diagrams: 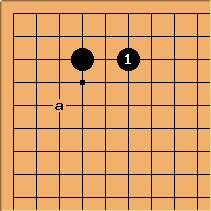 This is how I thought you were supposed to be developing. It looks awful, and I don't think I actually ever played like this. It's just that while I was playing the 3-4 stone, I was thinking about it like I was going to, except that then I never did.

(Off course, when instead of

you play at a, you get a shimari that is aimed at the right. But that's because the stone at a would then be on the 5th line from the top, not because of the initial black stone at 3-4...) 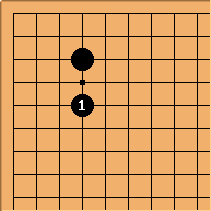 This is how it should be happening.

Like this, it's fairly clear to see that the development in the second diagram is better than in the first. I haven't fully internalized this new knowledge yet, but I think I'm allready seeing a little bit of the effects.

Kinda weird how one can play for that long while being misguided in something that seems fairly basic and fundamental.

This was large enough for its own page: TermsAndConcepts.