The two-stone edge squeeze tesuji , also known as the "stone tower", is commonly used in capturing races and can occur not just in the corner, but also anywhere on the edge. Also known as stone monument tesuji, stone tower tesuji, stone pagoda squeeze, or tombstone squeeze. 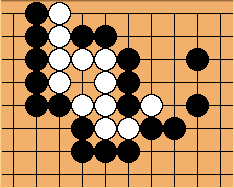 White to save his group. 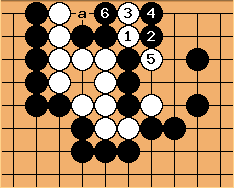 form the first part of the two-stone edge squeeze tesuji. Note that

is forced, as atari from the other direction leads to the capture of one of the two groups cut apart.(see later)

also prevents the atari at a. 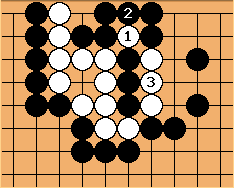 , which is the second part of this tesuji, forces the capture at

is an atari on three Black stones; White lives if these three stones are captured (see capture three to make an eye). 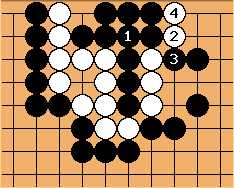 , it's one eye to none. White wins the capturing race. 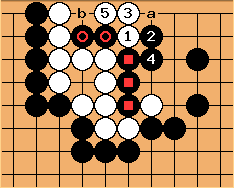 The best plays locally for Black after

are successive exchanges, saving the

and a for b. As a matter of technique it is often better to not play these exchanges immediately as they can be useful if they are kept in reserve for some time, as ko threats. It's a question of timing. Generally a will not be played before the endgame, whereas

may well be played before the endgame. 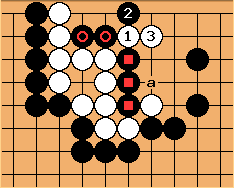 Giving atari at the wrong side makes it all too easy for White. Not only Black can do nothing to prevent White capturing the

stones, but also White can in the endgame capture the

stones (by playing at a). But probably a tenuki elsewhere is bigger than this.

This particular position is also known as the two-stone corner squeeze.

is necessary to reduce White's liberties. The first part of the two-stone edge squeeze tesuji is the descent at

The next part of this tesuji is the throw-in at

is yet another good move, if

Depending on the condition on the left side, one might argue that

is a better move. But it does not change the fact that

is too slack. Up to

, White wins the capturing race by one move.