The two stone corner squeeze is a technique used in capturing races in the corner. It is a corner variation of the two-stone edge squeeze (aka "stone pagoda squeeze"). 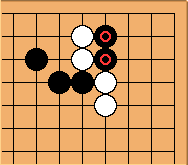 White wants to find a way to capture the marked black stones. Given the fact that both the black and the white stones have three liberties, white should find a sequence that never allows the black stones to develop more than three liberties. The two stone corner squeeze satisfies that criterion. Let's see how it is used here.

initiate the race to capture.

If Black connects at a after

, both groups have three liberties with White to move. And although the black group has an eye, there are no shared liberties, so it does not help.

If black fills an outside liberty instead, then the atari at a wins.

White won the race to capture with the two stone corner squeeze, because of the special properties of the corner.

It is tempting to play the more obvious squeeze with

, but it is wrong, again given the special properties of the corner.

This is one possible continuation. It is race between a group with an eye and one without again, but this time there is a shared liberty. Black has one exclusive liberty in the eye (

captured) and counts the internal liberty at a as well as the approach liberties b and c. That's four liberties. White counts the circled liberties and has three. White loses the semeai.

In response to the high approach

, the two space high pincer of

is a popular move.

is one of the usual replies,

is one possible line of play. After

White has no choice but to sacrifice three stones, escaping with

, black is left with bad shape, and white is not unsatisfied. 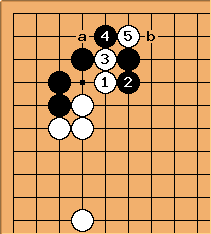 The position in the corner is the result of a very common joseki. When White plays the peep

, usually black defends at a.

Suppose, however, that black decides not to defend. Black might, for example, wish to develop the upper side with

. white pushes through and cuts with

. Black has two options: defend at a or capture at b. We will look at both options. 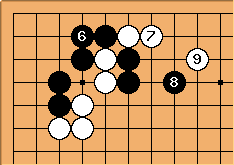 If black defends with

cuts off the two stones in the center, and black is on the run. Unless black has closeby support along the top, this does not bode well for black. 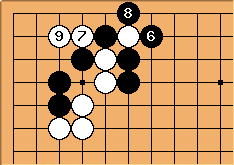 When black captures with

, white cuts and extends with

. Things are looking bleak for black's corner stones. The question is: How to continue with black. 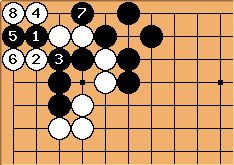 The tesuji that black is looking for is

. After the hane and cut 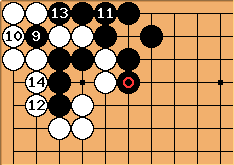 , black manages to rescue his corner stones. His corner territory is devastated however,so the importance of

should be quite large before black chooses to ignore the peep.