Connect instead of hane

Sometimes, one has to counter one's basic instinct and connect instead of hane. 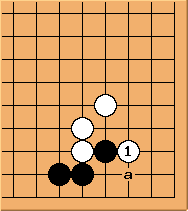 This double keima-like shape is often seen, not only on the second and third lines.

, your basic instinct (hane against tsuke) may compel you to play a, making a tiger shape. 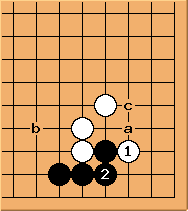 is generally better. Now Black can either take profit at a or c or jump to b. If instead ... 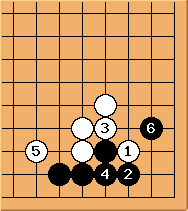 forces an answer. After

, Black is forced into a low position.

is a keima connection, and another example of technique. For comparison, ... 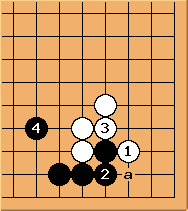 If Black connects first, he will play

rather than a (next diagram): 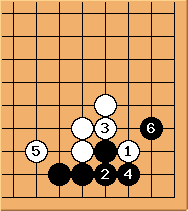 This is an example of tewari: the inversion of move order shows us something is wrong with the hane in the third diagram.

Disputing tewari and some questions

tapir: I don't particularly like this tewari example because while it claims that Black made two less than optimal moves, White made just as much. Look in the tewari diagram at

, it is a wasted move - making an empty triangle in gote,

next forces Black to live in the corner, but leaves a cutting point behind. Also I ask myself, is

not better played as atari? (Then the corner is safe already, also White can not close the side in sente as with this forward played 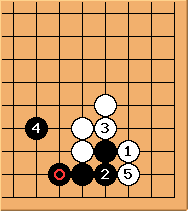 unkx80: I don't know how to assess this position. I would like to have white though. But note that

tapir: Me too. This diagram should expose the argument in the tewari above. It gives

and concludes that would be bad for White now, since Black would play at

and not the hane now. It is not a sequence that will happen in any game though. 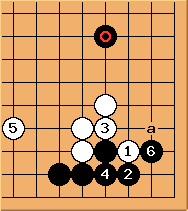 unkx80: I agree with this 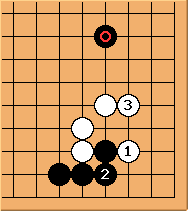 In the situation given above there is no

, but then White is strong and will get an extension while Black is very low on the side, but maybe living when you tenukied on the approach is good enough.

Let us look at

White follow up if the side is big (while technically gote, white capturing next is huge and likely sente - otherwise White can shut in Black in sente with a move like a). If Black the corner is 10 points - in gote, compare this to a standard 3-3 invasion, which is about as big, but ends in sente.

is pretty much forced (otherwise White takes the corner in sente by playing at 2-2 next). However, if we change the sequence and play the atari at

, then it is not clear that we really want to answer