The Korean term maek (Hangul: 맥, Hanja?: 脈) is not exactly equivalent to Japanese tesuji; it overlaps with suji as well. 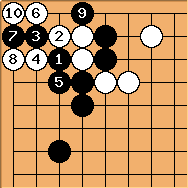 This is another example of Maek. This type of Maek is called "Control" Maek or SuSeupEui Maek

Can someone explain how maek is different from tesuji? Looking at the example above, this appears to be a tesuji to kill the white stones in the corner.

John F.: It's true that maek and tesuji are not the same, though in a western-language environment it's probably safe to say they are. Maek means pulse, or vital point. Tesuji refers to a process, not a point. But in practice the terms can be used of the same position.

Note: Maek is not quite the same as Japanese 'vital point', because it is used more commonly of positions other than life and death. Keup-so is a closer equivalent of kyuusho (obviously - same characters). I would diagree with the difference as outlined above: tesuji often overlaps with suji as well, as you'd expect from the structure of the words. Variants of maek in transliteration are mack and maeg

Charles: It's my impression that maek's correct application is a little broader than tesuji.

BobMcGuigan: I used to think of tesuji as in a tesuji, namely a startlingly good or effective move, a move that wouldn't normally occur to a player. This is how many Western go players use the word. But tesuji can also be used for shape moves or other simply good moves, and also means something like the best way to play, relating to process as John points out.

Charles: John's point about that has certainly stood the test of time, as far as I'm concerned. I'm now scratching my head about the right way to think about 'bundling' of 'lines' of play, from the same pro point of view. Perhaps tesuji is one of the simpler cases, where one can speak about the line of play, rather than have to explore various techniques (suji) that might be it within one direction of play. I was trying to formulate something coherent to say about (obsolete link now at concept/discussion) - on 'principles' and 'concepts' - from the same angle.

Hu: Perhaps instead of "vital point", we might use "crucial point" or "critical point" as a translation, since that would have wider application than life-and-death positions. (The root of "vital" is the Latin for "life".)