Easy way out of a double kakari

This page refers to the 4-4 point, double low approach. For other forms of double kakari, see double approach. 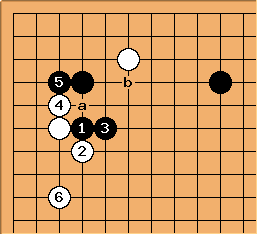 is a common joseki when confronted with a double kakari. It is quite common in handicap games.

White usually plays an extension along the left side at

(or one point further away) in order to stabilize her group[1]. After this, the threat of White a remains. This is why many books for beginners suggest that Black plays at b after White has extended along the side. However, playing at b might be too submissive when taking sente is crucial. 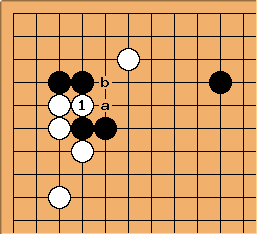 So what should Black do when White plays

If Black plays a, White almost invariably follows with b and a difficult battle ensues. In a high handicap game the most common outcome is that the black corner dies. 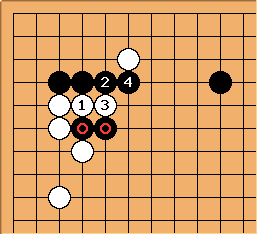 Actually there is an easy solution.

stones. This is a alternative worth considering. Black makes territory at the top and the two black stones are no big loss.

However, the surrounding position has to be taken into account. While this line of play is viable for many positions it may be unsuitable for others. But if Black is unsure whether he will survive the battle in the corner, he should choose this variation.

In A Compendium of Trick Plays, Kageyama says that the "easy way" is correct, and the other line of play is unreasonable. (pushing through was the trick play) The corner shouldn't die, but Black won't get a good result anyway. As the peaceful variation gives a huge profit, it would indeed be strange to expect the fighting option is even better.

[1] However, White can resist the easy way and still make it more complicated: 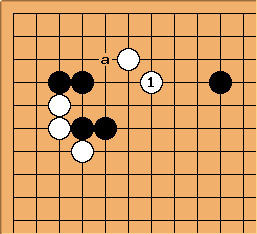 Black now has to defend against the cut, usually at a here. 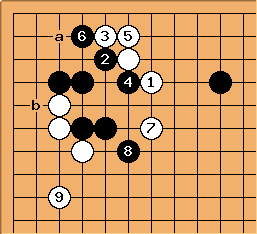 For reference, this is the canonical joseki after

. Later, White can aim to enter the corner with the clamp of a. To prevent a, Black typically plays at b. 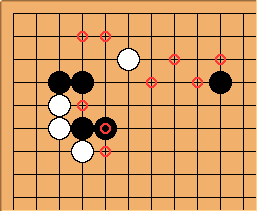 is played. The diagonal is the most common of those.

About the final stretch in the sequence 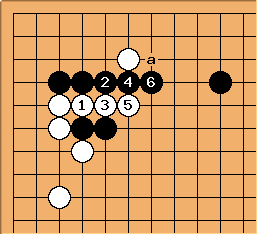 must not play at a. 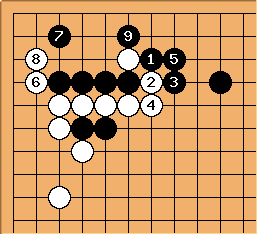 , Black has suffered a loss while White retains sente. 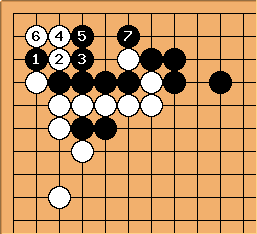 is a tesuji. Black suffers an even bigger loss. 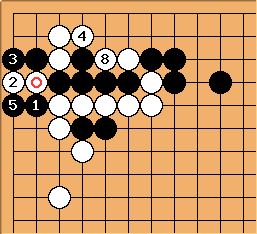 here is unreasonable. Black suffers a total loss in a similar fashion to the two stone edge squeeze. 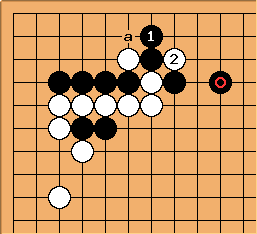 is another attempt, but

is a tesuji. With

things are a little better, but without it the

tesuji is even more effective. Black still has a lot of aji in the corner.