Note, if you know or can invent the names of the tesuji, move diagrams to new pages. (this has been done now for all but the last example --Dieter)

Uberdude: I'd say this is an example of shortage of liberties (Damezumari), though perhaps there is a more specific name for this type on the edge. 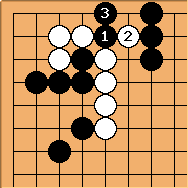 Imagist: What about "mineshaft tesuji" for this one? The area around 2 looks like a place where white can't follow because she'll fall down the mineshaft (maybe that's my overactive imagination).+

senderle: Yes, it's a watari, but that term is more general; not every watari involves a shortage of liberties that prevents the opponent from cutting. I like mineshaft tesuji!

Something from the endgame. Beginner's level.

gives double atari ignoring the osae, black tries to attack back with

Jared Beck: The same tesuji, also common with beginners. I wish I still got to play simple tesuji like this. My opponents don't make such mistakes anymore!

Bill: How about cut-back?

Paul: I love this tesuji because my friend and I discovered it ourselves when we used to play Go together when at primary school. My friend used to call it "the old sea captain's trick"!

Guest: As a begineer I'd really appreciate some clues as to a good response to this.

This happens sometimes even at IGS 5k* level. But in most games it is never played and remains a hidden threat that limits opponent's freedom of choice.

If you look at it this really is just a ladder that turns around a stone. You can call it a "Ladder" so it really isn't nameless. -Enz0

Bill: How about roll-up? 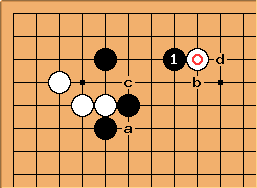 is a light way to play, which makes miai of a and b.

Both of these tesuji work by making the opponent choose between answering an attachment (which is usually good) or protecting or taking advantage of a move nearby. Either way, you get something. I find this idea rather interesting, but don't know what they are called.
tderz: That example is either in GalacticGo (Vol. 1) or in "Whole board Tesujis". I will check whether they gave it a name there.

Slarty: Yes it's interesting, although an idea instead of a local pattern. Perhaps "creating a (second) good followup," "tenuki probe" or "contact with miai followup." Playing two local moves in a row: "time travel"

kmr? -This 1 attachment looks like mistake. How black can respond cut at "c" and get any good result?If black play "b", white has option of descending from "c" stone to edge getting big corner, or extending at "d". If black has stone in top (right to white stone), white will sacrifice his top stone and go for big corner.

xela: It's a question of judgement. If white c followed by black b, then the

stone has suffered a lot of damage. Bear in mind that white would have played the pincer stone

because the area to the right (off the edge of the diagram) is important. The educational value of this tesuji is that many amateurs overrate the corner territory, and undervalue the work done by

, while professionals give more weight to whole board thinking.

If white replies to

at b, then black will go back and connect at a, and the exchange of

for b is a useful forcing move for black.

To be sure, it's an old-fashioned joseki; the 3-space pincer is already quite rare nowadays, and in most contexts AI would prefer to play

at c instead. But the difference is fairly small (around half a point according to KataGo), so it's no reason for amateurs to avoid this joseki.