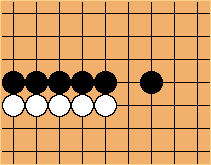 What about this situation? I tend to always get this in my beginner games... so, cut or don't cut? 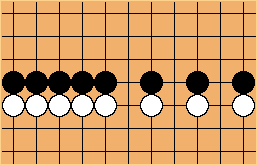 And if you don't cut, won't that encourage this? (for low level players)

Good question. I think it is as much about getting ahead as about cutting the one-point jump. The following variations can be expected. 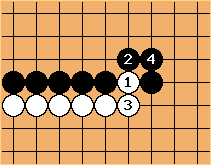 Bill: This is not a cut, it's a hanekomi or warikomi. 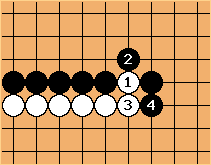 If Black is stronger around he can consider leaving two cutting points. 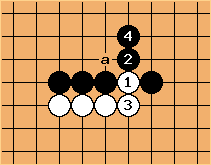 If the walls are smaller, 4 here or at a can be considered. 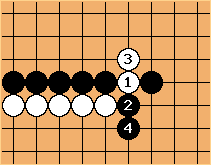 If Black knows what he's doing, he can give atari from the other side and heavy fighting may occur. If you realize that you should have given atari at 3 instead, don't take back your stone. 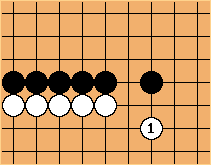 If any of these diagrams spells danger, White can consider getting ahead with keima. 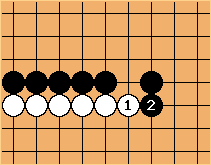 Spoiling the shape is possible, but Black 2 must be expected. 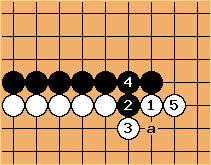 Finally, the mutual ikken tobi. If Black thrusts inward, with long walls, White can play at 5. With shorter walls a may be better. 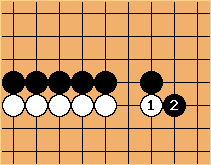 Since the ikken tobi is also a contact play, Black's hane must be considered. 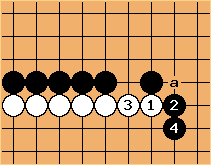 Hey, Jasonred here again... once more, have sympathy on us poorer players (I'm about 18 kyu now, yay!) ... OK, from the above, I've decided that replying with ikken tobi with ikken tobi can lead to problems: Black hane at 2 looks like it might lead to 3 and 4... I thought of replying at a, but it doesn't seem like such a good idea. 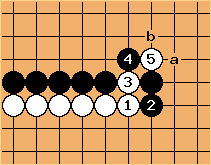 Variation 2 looks bad as well, but I'm not sure... would it lead to the above, with Black performing atari at a or b? I'm not sure, that's all. 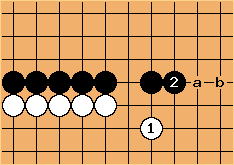 At my low level, some of us play really defensively, so often the wall is to make a solid border... for us, White was already strong on the lower side of the board, and Black wants to keep him out of the top, where Black is pretty strong too. Black starts off the wall at the height which will give him marginally enough territory to win. Either that, or the wall is there for some other purpose. Anyhow, I'm wondering why you sort of abandon the whole wall thing to play keima. I know it gets ahead, but doesn't it also surrender territory to do so? 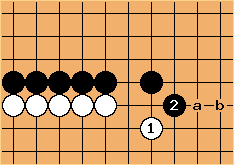 Come to think of it, why wouldn't Black continue the wall, but lower, encroaching on White? (After 3 at wherever, Black plays at a, then b...) 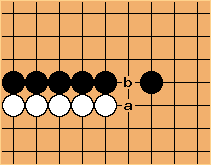 Taking this to be a shape problem, White plays a or b. You could say that a is the standard answer.

This is a kind of entry-level pushing battle question. 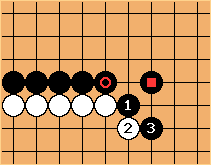 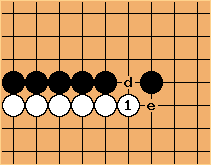 In the light of that, it is most natural for White to start with 1 here. Next Black d or e. 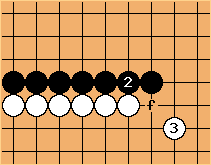 In this position White 3 is natural for getting ahead. White at f will sometimes be right, but it is pushing from behind. 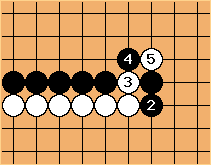 Black may also block White's path. Then it is natural for White to cut and fight up to 5. You can't expect to see enough of the game in this size of diagram to judge how this will turn out. 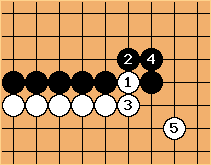 White wedges in at 1 to leave Black with cutting points. This would be a normal result. We could also get back to the previous diagram. 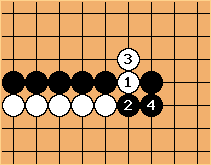 If White isn't happy about this fight, though, White can't wedge in this manner. 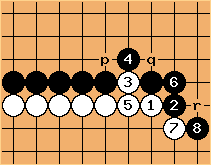 The problem with White 1 is that Black may get this sort of excellent result. Unless White can exploit the cutting points p, q, r, she has a very poor result here.

By the way, many club-level players would probably use the hanging connection for Black 6 in the previous diagram. That is, the marked black stone here. That would mean playing Black 8, in normal circumstances. In a pushing battle, one tries not to back down in this way. 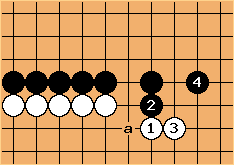 About this variation of Jason's: Black has a very solid way to play: butt at 2, and White will be leaving a weakness at a by playing 3.