Pushing From Behind/ Discussion

More often than I would think, I've noticed that some pro games include pushing battles that result in striking straight walls for quite a few stones. This of course means that one player is pushing from behind for several moves. Here are a couple of examples, but a database search can turn up many more: 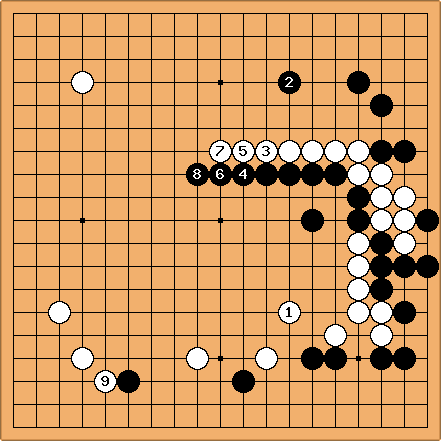 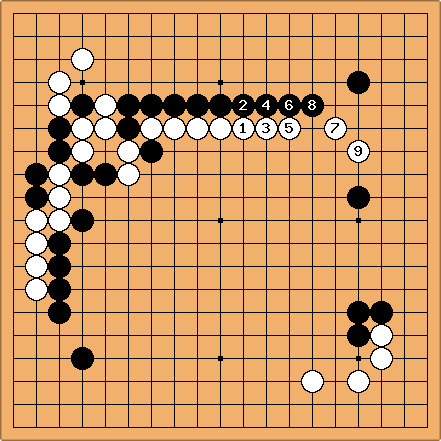 Calvin: So I guess I have two questions. The first is why the player who is ahead does not hane. The second is why the player who is behind does not use common techniques for getting ahead. I'd appreciate it if a stronger player could explain why those options might be avoided in these situations. My general thought is that's a matter of safety in both cases, but I'm wondering if there are other considerations.

Alex Weldon: Yes. I'd say that in both cases the player pushing from behind is doing so because he doesn't have much of a choice, for reasons of safety. Generally if you're pushing from behind it's because allowing the opponent to turn will seal you in (or even kill you) but trying to get ahead will result in being cut.

Note however, that although the player pushing from behind in these examples doesn't have much choice in the matter, he also lost both games. It's a small sample size, so I can't really claim that this is statistically significant... but it's at least a bit of circumstantial evidence to suggest that putting yourself in a position where you have to push from behind does not do much for your chances of winning, any more than does pushing from behind when you don't have to. Finding yourself in these kinds of situations should be considered painful.

In response to your other question. Yes, the main reason that pushing from behind is usually bad is that it allows the opponent to Hane at the Head of Two Stones or three, sometimes repeatedly. In these cases, that doesn't happen. Why? It could be that the player who is ahead can't play hane because the cuts left behind would be too severe, or it could be that he is already profiting simply by pushing straight ahead (more than the player who is behind, to my eyes), and doesn't need to be more aggressive. Looking at the positions, I would guess the latter.

Thanks, Alex. Statstics don't help much. For example, when I do a Kombilo search on GoGoD on this pattern with fixed color, black wins 69.2% of the games when pushing from behind with a but 70% when he gets to jump ahead with b. That's better that black's win rate with komi, but the sample is too small to be significant (13 games with a and 10 with b) and one should not conclude from this that being behind in pushing battles is good. When I do searches on smaller walls, there are more hits, but results are totally equivocal. I think that the only conclusion that can be drawn is that if a pro does this, it's for a good reason. In the games I've seen, there's usually an obvious one. I was hoping to learn more about the proverb by learning when it's wrong. If you're ahead, playing hane can help build more, but maybe the cutting points are sometimes too much of a headache. One thing that searches do say as that if it's even (first player gets to hane) then hane and extend are chosen about equally, even if the strings are two stones in length and the hane at the head of two stones proverb applies. I sometimes apply this proverb reflexively, but I've learned that it's wrong almost as often as it's right. It's naturally worth considering, but like anything else, you have to check the follow-up.

Bill: My impression is that pushing from behind and extending rather than playing hane are both largely dictated by tactics. The question can be a difficult one, and even pros err.

I think that a page or pages discussing such exceptions would be good.

dnerra: Maybe so. I also think that 1d-3ds typically tend to hane waaay too often instead of just extending when their opponent pushes from behind.