This page is in need of attention.
Reason: The fourth section describes a particular and even peculiar situation. 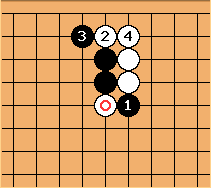 If Black cuts with

after White's hane at the head, White hanes at the foot and connects. This follow-up is important. 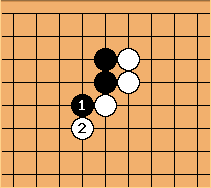 If Black counter hane, White can consider a double hane ... 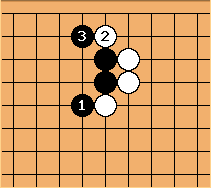 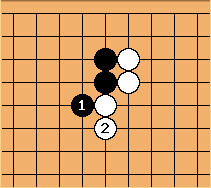 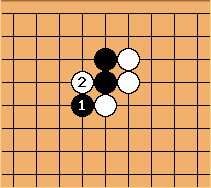 3. Counter hane at the foot 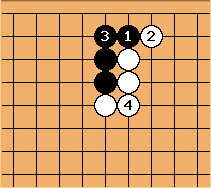 If Black counter hanes from this side, White can hane and connect. 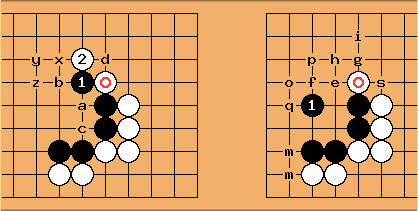 tderz: A common mistake is the hane vs. the Hane at the Head of Two Stones. Black creates more own defects (a, b, c), whereas White has fewer (d). Sometimes this result on the left is worsened by black b, Wx, By, Wz or so.

on the right settles the shape with one move: 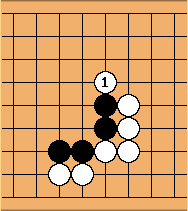 , the black stones are junk stones. I don't think any black move attempting to save these stones is correct here. Black should take a light approach. 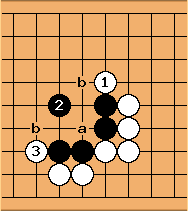 can be answered by

, if White goes along with Black's mistaken thought that any of the black stones are worth saving/capturing. Next, if Black a, either of White b further destroys the black shape and the damage gets only worse. 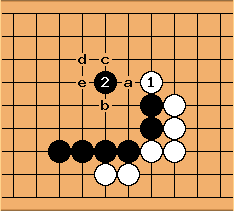 tderz: With a situation a bit different, Black can also reply differently to

here.
If White a, Black b.
If White

at c, Black a reverts again to bad style.
If then Black

at d, it depends on the situation whether White can cut at e. 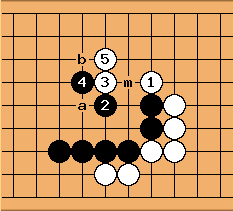 tderz: If White a, Black b,

could also be at m.
Sometimes

at b is interesting. 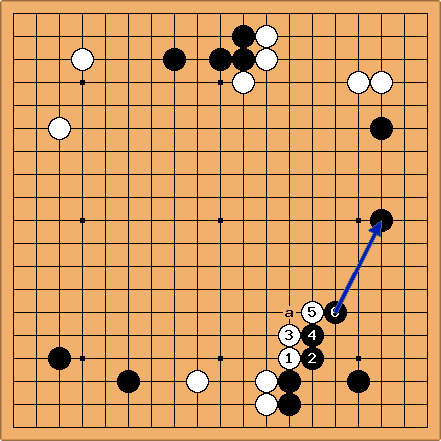 (Bashan:) This is from a game I played yesterday on KGS as White. I played hane at the head of two with

. I felt I was doing the right thing, because I wasn't pushing from behind, but it lead to the diagonal wall (is there a name for that kogeima-wall?) leading to the stone below the east hoshi, which would help Black secure a nice territory at the border. I wanted to tenuki, but didn't see a way to leave this in an orderly way.

at a would have been gote. I thought of playing

at a already, which would have left my position a bit more secure, but it still would have been gote. So, how could I have left this in sente? 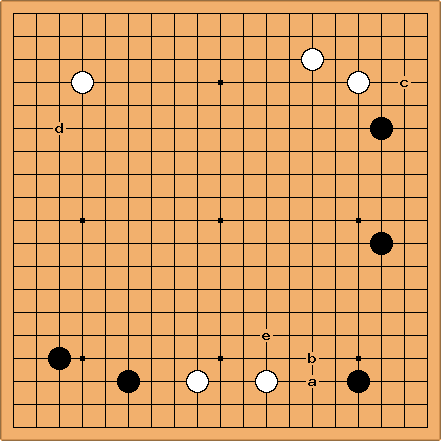 Uberdude Let's go back a few moves as I think white could have played better. I presume this situation arrose from a position as in this board, in which I have simplified the other half and moved the right side 3-10 point one line lower to make it the more common mini chinese style. In the position a is by far the most common move for black. In a GoGod search of 63 games matching this position black played there in 60 of the games, and only 1 each of b-d. We can understand this move as keeping white's 2 space group weak and developing black's right side. White will normally (55/60) jump to e to strengthen his group and provide support for going into black's right side. 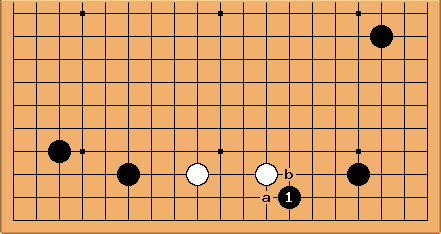 So armed with that knowledge of the normal moves in this position, let's analyse the move your opponent played. It is on the 2nd line instead of the 3rd. This means it is low and won't develop the right side as much. By being a kosumi away from your existing stone if you tenuki his follow up will really hurt your stone by taking a liberty. So there are 2 obvious moves to consider here: a and b. If you play a as in the game he blocks at b and your group is rather cramped. You then hane at the head of 2 stones, but black has his 3-4 stone for support. He could even consider cutting when you hane and making a big fight. The other move, which I prefer (and GoGod search of local position confirms the pros do too), is b as this makes black low.

(Bashan:) Actually, this is how we got there. (Sorry about leading you on the wrong track by misnumbering

in my original diagram - but thank you for making me aware that I needed to look further back. See

would have been a good moment to tenuki? 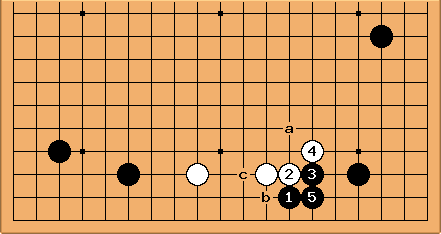 Here is one possible continuation. White could now make nice shape towards the centre with a or close the territory and make a base with b. If white plays a black can probably play b in sente for c which means white doesn't have eyes in the edge, but that's ok because black is playing on the 2nd line in the opening and white has nice shape which will make it easy to make eyes and invade black's right side. 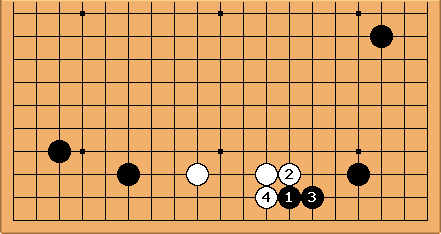 And here is another way. Again black is low so white is satisfied. Note that in both these situations white has focused on making his group have nice shape locally which leaves a big gap to invade on the right side. I think the problem with your moves is you end up with a pushing battle with black in which his wall is making the right side points, and your wall isn't doing very much.

(Bashan:) Exactly! This explains both why I was dissatisfied with all choices I had once I started the wall, and why we had to look further back. 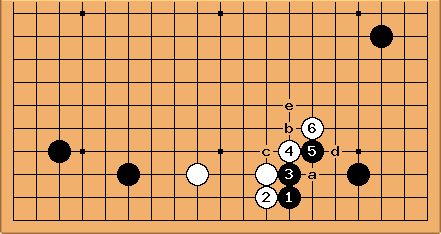 But even playing your way of blocking on the 2nd line instead of 3rd, I think this double hane here is stronger. It presses your advantage of being ahead in the pushing battle and aims at the cut of a to capture the 2 stones. White has the ladder so the sequence b-e is fine for white. 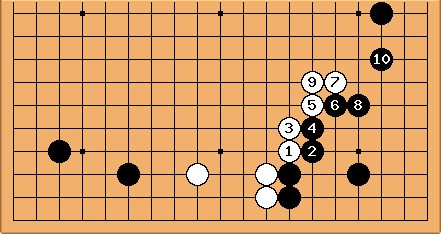 Back to the original question of "How to get sente?", you can get sente by making a mistake and tenuki-ing in the middle of an urgent pushing battle =). I think it is wrong for you to expect to get sente here whatever happens. Those previous diagrams where white pushed black low white took gote but that is fine. In the game you could keep building walls like this which does end in sente for you, but black got a big side (with a little bad aji with the cuts). There are also oppurtunities for fighting variations with all those cuts.

(Bashan:) Thank you very much for the extensive explanation!