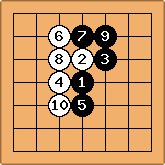 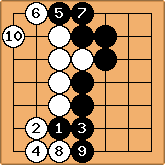 chipuni: How is this defined as best play? How was this determined?

PurpleHaze: A group of New Zealand dan players over the course of several years with the assistance of computers and a few Japanese pros.

gimpf: Maybe for such things we should add always when possible a bibliographical reference. Don't trust best play by amateurs...

RobertJasiek: Anything about perfect play without a rules text and a mathematical proof is not serious.

PurpleHaze: Fine, I looked up my notes: the rule set is NZ (no suprise) and the pros were Kudo Norio and Nakayama Noriyuki. My source was a post to rec.games.go by Bill Taylor.

After checking Google, the post may have been this one (but this is not how I remember it):

And Jasiek and Taylor have argued this point before:

There is also an article in the summer 1995 edition of the American Go Journal by James Davies.

Evand: The correct komi for 7x7 would be 9 points, if the solution is correct. See komi for an explanation. The usual definition is that correct komi would lead to jigo with perfect play.

(Sebastian:) Interesting, that pushing the cart from behind (

Bill: Considering the fact that White is blocking Black from the corner, rather than trying to get in front, I think

is best described as a block.

DougRidgway: See this for another line and a link to the whole SGF.

The Count: One of the comments in that .sgf seems to be wrong. However, the introductory comment given before move 1 seems to imply that all comments are taken from James Davies who wrote an article in the American GO Journal about it (Vol 29, #3, 1995). 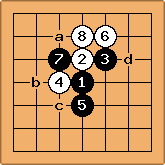 The Count: According to the .sgf linked above,

is equally good as

at a. Then after

, Black apparently has 4 equally good moves at a through d. However, after

at d, White cannot prevent a Black win by 11 points (instead of the "perfect play" 9 points), at least in all the variations shown in the .sgf. Does anyone have a copy of this Journal to verify whether the double hane of

in the original diagram was a mistake?

willemien the sgf file can be found at

http://www.cwi.nl/~tromp/java/go/7x7.sgf at least I guess that is the sgf where they are talking about.

For a more detailed responce to TheCount's question see BQM442

After reading Davies' article I realised the investigation in Davies article was done using the JapaneseRules The sgf uses the NewZealandRules. But that is insufficient to explain the difference in this case. All this with thanks to the American Go Association for sending me copies of Davies article.