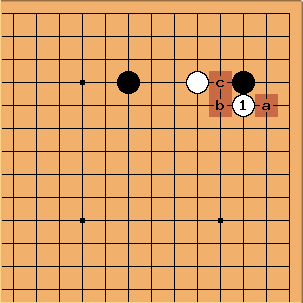 With the attachment at

, White is actually challenging Black to a fight. Black can reject the challenge with a, or accept it with b or c. In particular Black c (the Magic sword) can lead to long and complicated variations. 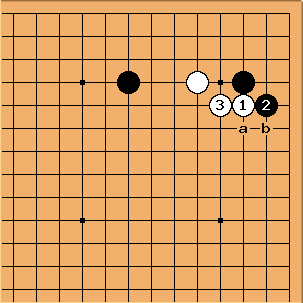 After the exchange of

, black can play either a, which involves a ladder, or b, which is more common with the pincer. 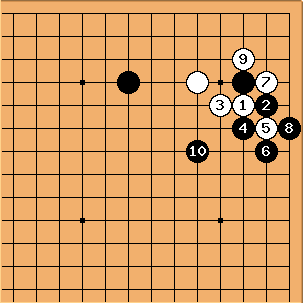 leads to a position that is also known without the pincer. White can cut at

to take the corner, or at

to take the outside with a ladder. 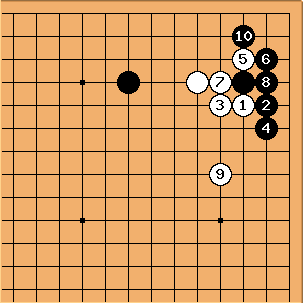 is rare when the pincer has not been played, but in this position it is quite common. White attaches at

, and Black defends at

. Because of the pincer, White has little room to make a base here, so jumping out at

is common, after which

stops White's hopes of a counter-attack. 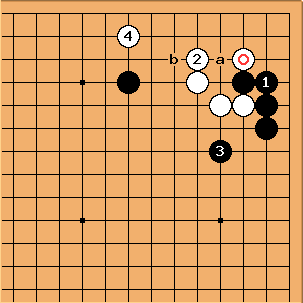 Charles The other way is

, which is natural suji, not allowing atari. Then

is agreed to be better shape here than at a which suffers Black b. This line occurs in pro games. 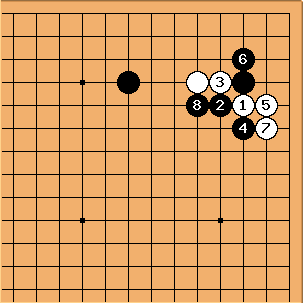 is a fierce play, and White might well suffer greatly if she makes a mistake here. 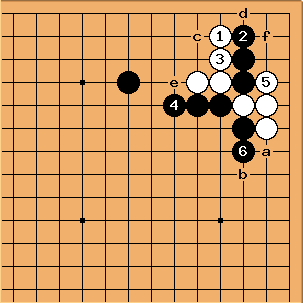 This is the main line for this joseki. White takes the corner, giving Black thickness. After

, black can later play a or c in sente, requiring white to defend the corner. Exchanging white a for b to stop black from playing a in sente is usually not good as white is pushing from behind on the second line. On the top black has the sequence Black c, White d, Black e and White f as a forcing sequence. 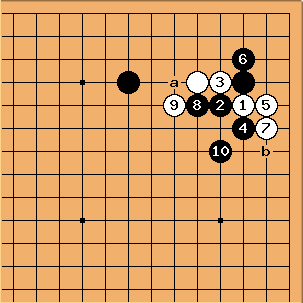 is a mistake. Black plays

, after which a and b are miai for black. 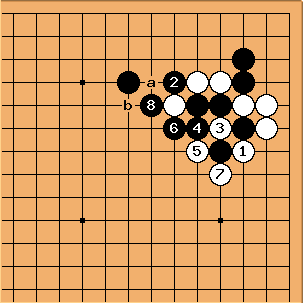 Exchanging White a for Black b is too great a loss, so White can only play atari with

, sacrificing two stones. Black gets a lot of territory on the upper side; white's only compensation is that she has sente, and thus played one stone less in this corner. To see why this is bad, compare this with diagram 2 of the small avalanche. This sequence is identical to that one, but all black stones are one line higher. 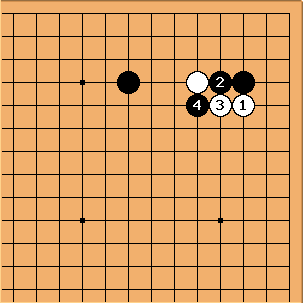 , White has the Hane at the Head of Two Stones shape), but it is still joseki. Black invariably cuts with

, after which the position is known as the magic sword of Muramasa, a joseki which shares with the taisha and the onadare a reputation for complexity. See magic sword for this position.