, in cases where the important ladder is bad for Black.

Black can play confidently at a in cases where the ladder (see below) is favorable. If not, Black at a is somewhat less attractive, and Black will also look at the plays at b and at c.

This is the key line: it might turn out to the advantage of either player. Now Black at a or at b.

is what Black wants to play (as a double-purpose move: in order to threaten

with a ladder capture while also threatening

with isolation by playing at the circled point.

This actual result isn't so common in pro games, since White will try to avoid it.

White now has some ladder aji to exploit; Black will complete the capture shortly, and then White will consider expanding the corner at a.

Black is guaranteed good thickness in this line.

is a kind of tesuji based on

, because Black doesn't have a good atari play now.

This is therefore a tough fight for Black. It has gone well beyond the idea that Black plays a cover and White has to play somewhat passively. 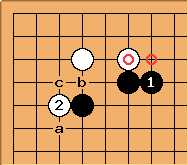 is played in reply to

is a standard idea, before pushing once more at the circled point (which is after all pushing from behind).

At this point any of a, b or c can be played by Black, according to current pro practice. 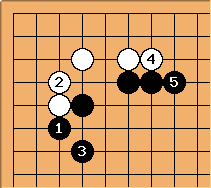 there are several variations. In this one White will take sente after 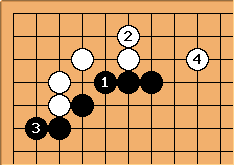 This is another way to play for Black, taking sente - at a cost, naturally.

is currently fashionable. What now for White? 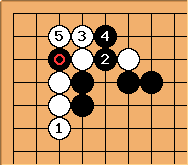 is played, provoking this sequence. Black has sente, but White's corner isn't small.

This is known only in Korean games. Black is hoping for an improved version of the hanedashi variation. 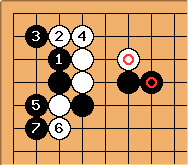 After these plays it has reached a position from that joseki, but with the

exchange in place. What follows is on similar lines.

This too is being played currently by the pros.

These are the common moves that follow. White can take sente at this point.

Here is another line which is even more rare.