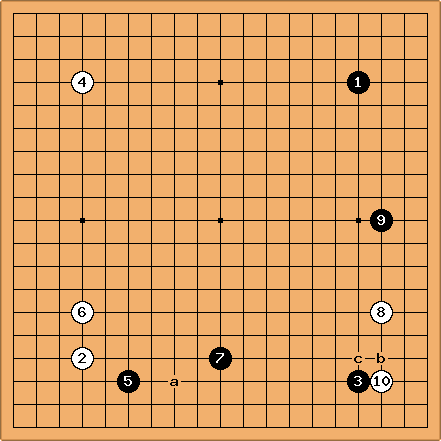 and is also a kakari to

6: Indicates that White wants a calm fuseki. A pincer around a would have been possible as well.

is loosely connected to both of

and maps out the bottom edge for Black, but leaves White sente to play...

8: White plays here to stop Black from playing here and making too large a framework. Again, playing at 8 instead of one point lower indicates that White wants a peaceful fuseki.

9: Dual purpose move: serves as an extension from

and as a pincer on

10: White attaches in the corner expecting to cross-cut at c if Black plays hanes at b. The usual outcome of this process will wipe out Black's position along the bottom and threaten the stones on the left. Black's resulting position on the right will be vulnerable to a shoulder hit against the low stone at

. If Black pushes up at c instead, White will be content to follow at b which will turn Black's play at

into an extension against a low white position. Meanwhile Black's bottom side position is still open to invasion at a... 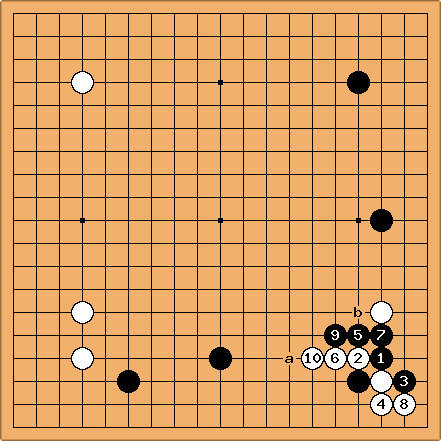 11-20: This sequence was added but move numbers were not included. Is this the proper order? Seems plausible.. -- Matt Noonan

I have corrected the move order: yours gave White the option to cut at

at some stage. In this move order,

is not joseki. Instead, attacking with Black a, defending with Black b or playing tenuki are the moves that are played by professionals. -- Andre Engels

To second what Andre says,

is a thank you move. It provokes

, which strengthens White's group while weakening Black's group on the left, in exchange for very little strengthening of Black's position on the right side.

Also this may be a place for Black to avoid joseki and play something like this. 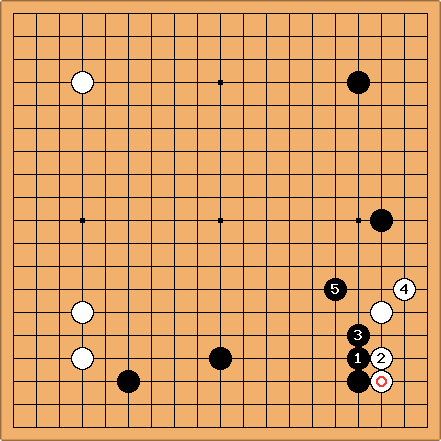 Black's wall works with his existing stones on the bottom. To prevent this White might start with the tsuke at 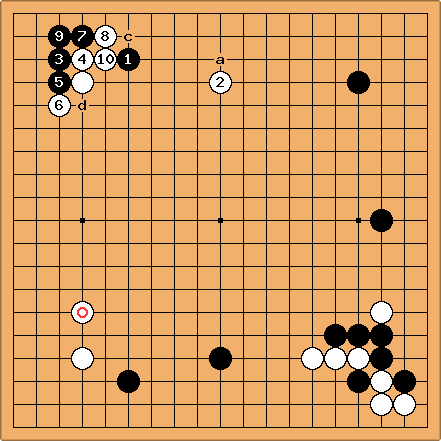 here be better played at

or a are both excellent moves. White can indeed play a pincer now, but the result need not be bad for Black.

was not the best choice. A tighter pincer might have been better.

MortenPahle: Why does White block at

) can expand the white moyo even further?

MattNoonan: It seems that if White wanted to block on the other side, he should have played a tighter pincer. I think letting the two black stones link up is letting Black off too easily, and it leaves White with a floating star stone and a wall which probably needs at least one or two more defensive moves.

a wasted move. What was the idea behind

AndreEngels: In my opinion, there are two reasons why White should play at

Arno: I was looking forward to something like this.

before defending at a is the way to go. White builds a nice framework at the top.

straight down is the usual reaction to

Back in the game, Black connects at

and waits to see what White will do. If

he can play down at c looking toward the cut at d next. Will White connect at d to try to make something of the left side, allowing Black to connect at 10?

is the kind of error I always hope players will make. Because it does show that they do have a feeling for the game. Locally it is good shape (Hane at the Head of Two Stones), but it has the problem that it does not work.

is perhaps more usual, but this 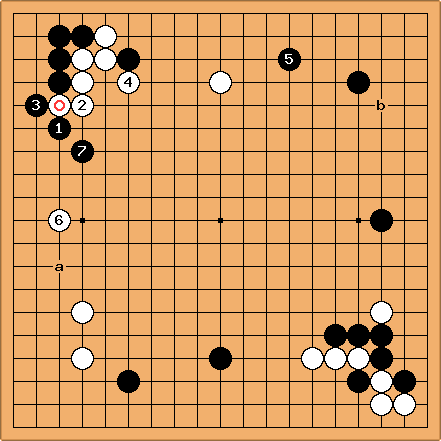 is tesuji in this shape. If White extends downward to

and White is in trouble. White therefore has to connect at

, Black has a small advantage in this corner, because the exchange of

MortenPahle: Thanks for answers to my last question. Here's another one: why does Black play this relatively small extension (which still leaves the corner open and is not sente) instead of an extension down the left? The left side seems to be the most important part of the goban right now, with a large potential for white development? If Black had played on the left, which would have been the best approach? Black a seems too far, White might pincer with

seems to be the largest move on the board at the moment (note, I was not the author of the move, but I did consider it as natural). It increases Black's moyo while preventing White from creating a moyo at the top. Playing on the left side seems to follow the same line, but many games show that Black has a weakness in the top left corner formation which could be used to cut it off from any distant stone on the side. Both a and

on the diagram would have to fight on their own. On the other hand with lower left corner opened White's moyo cannot get as big as Black's moyo at the right side and top.

AndreEngels: Because Black is already low in the top left, he cannot make much territory on the left. On the right on the other hand, he has a moyo, and any extension here makes it stronger.

looks awfully slow. Surely the enclosure at b is better.

is likely to strengthen Black here, but White does not mind because she can still invade the corner.

DaveSigaty: While I agree that

is a good move in this shape, I can't help wondering what White would have done if Black had bluntly cut at

the ladder at a does not work. If

looks like putting White on the spot. What do you think?

AndreEngels: You are right: according to joseki theory

is also a good move, provided the ladder with White a does not work.