Alex Weldon: In a game I recently played, the opponent played a very unusual move, that I wasn't prepared for. I ended up getting a very good result, but that's because of a mistake by the opponent. If he'd played right, we'd have had a confusing fight. I'm curious as to whether his original strange move had any value, and if there was a better refutation than what I played. Here's the sequence, up to the confusing move. 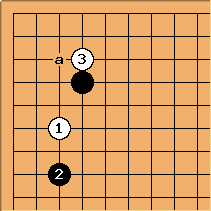 seemed very strange to me, and probably hamete, since White at a is standard[1]. Here's the sequence that followed. 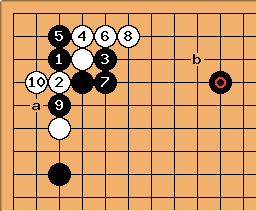 Not wanting to just block at

is fairly inevitable. I atari at

I think at this point, White must cut at

and start a difficult fight, but instead White pushes out at

is right, I'm sure, making miai of

so I capture with

. White for some reason decided to resist with

, so I block at a and then White makes an ogeima to b to settle his group.

Clearly, White lost out big time, here, and indeed, the game ended with Black winning by resignation after 85 moves, due to this, a Black double-wing formation in another corner, and Black living inside White's moyo.

However, there are problems with this play. For instance, I'm not at all sure of the outcome if White had cut at

in the first diagram at all playable, or is it just pure and simple hamete, trying to intimidate me into blocking instead of playing hane, so that he can destroy my moyo?

HolIgor: I think that white should not be very bad after the tsuke. Usually white plays double kakari here and gets into the corner anyway. The question is whether white loses something compared to the established variations.

Some tactical in the main variation. HolIgor 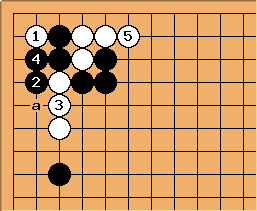 Alex Weldon: You should have mentioned that

here is instead of

in the game diagram. Took me a while of looking back and forth to figure out at which point you were deviating. Anyway, this looks better for White than the actual game, and makes it a bit complicated, but how should Black continue now? If Black has to push at a to make life in the corner (capturing

and connecting out are miai), and White can jump out and attack the three Black stones, it looks good for White. Is there anything else Black can do? 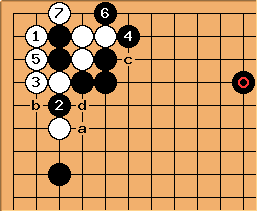 Struggling to keep the corner is not the right idea here. The placement at

. This works well with the marked stone. After

, Black can simply play a. The more aggressive b leaves behind the aji of cutting points at c and d. --DaveSigaty

Charles I don't know about that. There are a small number of examples in pro games. 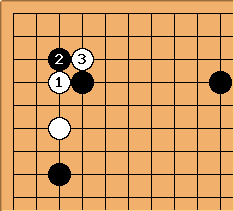 This transposed way is seen in a number of games. 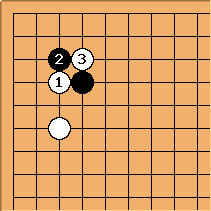 On the other hand, I believe that playing

this way usually is classed as a trick play. When it occurs in pro games it is in some definite context (White coping with black thickness).

There doesn't seem to be enough material available to speak of joseki.

HolIgor: One has to have a point of reference. Let us look at standard variations. 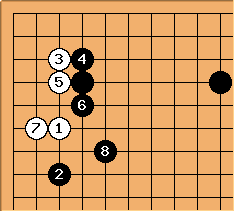 I think white wants to avoid this. The conclusion is that confining white to the corner is kiai for black. :) 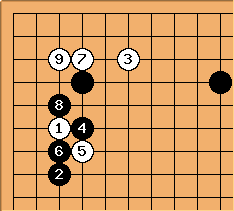 This is what white usually does to turn black to the other side. 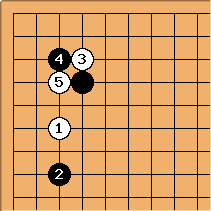 This is the question. The internal voice tells me to play atari. Please, feel free to prove it wrong. 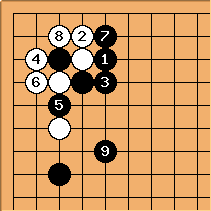 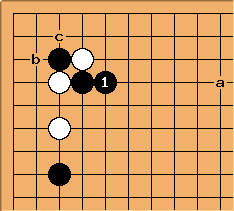 DaveSigaty: The Igo DaiJiten (2nd edition) covers this with a few diagrams (without the stone at a that was present in the game). It cites no examples and it looks like it may be pure analysis.

The first point is that

is a calm response. It is treated as the main line. White tries b or c. 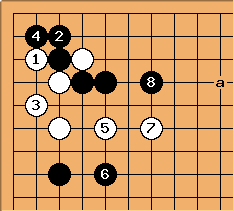 is a quiet line that is out of keeping with White's original plays. This is marked as joseki but Black is not dissatisfied. 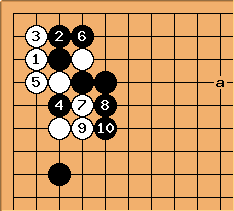 Pushing into the corner does not produce a good result for White. This is even more true in the game since Black had a stone at a. 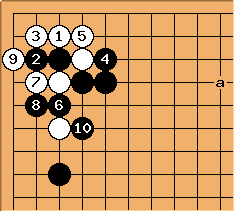 White tries the atari at

and then finish with 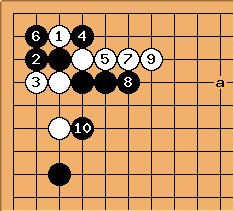 is not effective either. 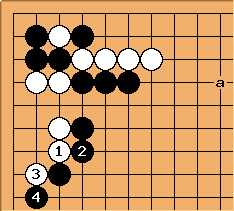 White collapses. Bill: You beat me to it, Dave, by a matter of seconds. ;-)

Suzuki and Kitani's Small Joseki Dictionary regards the extension as favorable for Black. They also give the following (without 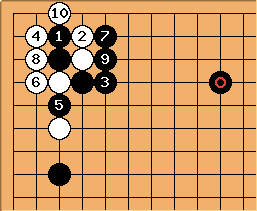 , this extension may be better. Note that

is possible because there was no atari at 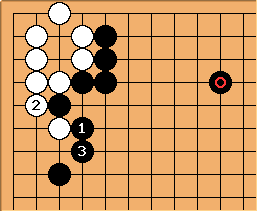 Sazn: This is the one of the most common trick play from 4-4. Here is what I could see from a book.

Black falls into the trick play, the usages of the two other black stones become less. You agree? 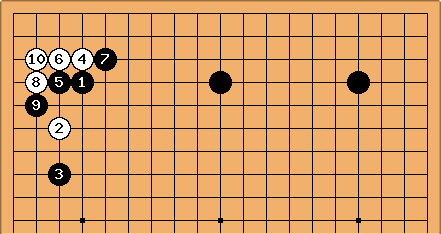 DaveSigaty: This shape appeared in the upper left corner of on-going game one. It was discussed on Ongoing Game 1 / Moves 1 To 37. 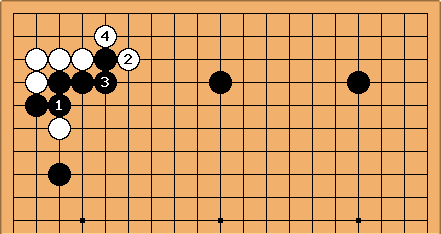 To put an end to the trick play 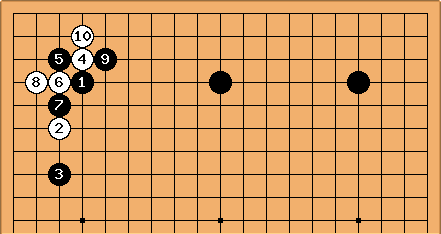 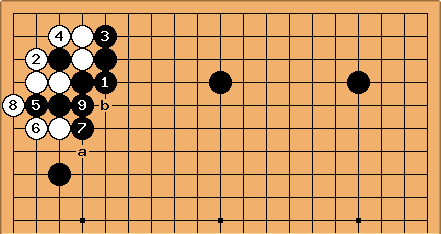 We can see that WHITE (sorry for earlier mistake... typed without thinking much of what I was typing) is in a very bad situation... especially in a handicap game.

Sazn: 1. Don't question a book. This is normally played in a handicap game where white, a player with greater ability (in a normal handicap game) uses tricks and other methods to defeat Black and lessen the effect of the handicap stones. In a handicap game, one of the points for Black is to keep White out of the center. This picture shows an example of that

Dieter: 1. Indeed. Black keeps White out of the center. So why is it bad for Black then ? Questions are attempts to understand, not symptoms of incurable criticism. (Charles I assume that actually the intended comment was that this was bad for White.) 2. Let's look at the diagrams.

Sazn: Now that i think about it, I don't think there is anything wrong with playing at a. I assuming from a point that this is played in a handicap game. An influence like this good for black, agree? even if white goes at 1.

Sazn: Sorry for the mistake... White is in a very bad situation.. that is what I meant... sorry for any confusion. 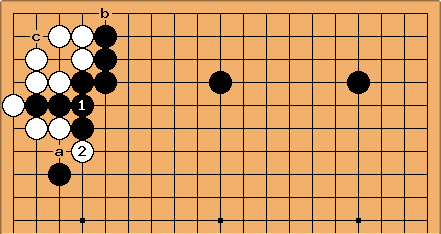 But don't u think if

happens and then black cuts at a, white will be in trouble (easily attacked)? in this case? You have to have some go-sense to agree with me.

Dieter: Yes, but if Black connects at

instead of saving two useless stones at

, he cannot be cut at all. If White next captures the two stones, Black blocks and stays connected. I'd prefer connection, sealing the opponent off, over a cut where my opponent is in slightly direr straits than me. BTW, why did you delete my diagram ? It would make more sense to delete the above discussion, which is very odd-looking now that you corrected the typo. With sympathy.

dnerra: I don't know which is better, but

as played does have some appeal to me. It is bigger than it looks. For example, once Black plays at a, White can no longer play the hane at b (otherwise there is a seki in the corner with Black starting at c). So

might be ok if Black is planning to add a move at a soonish, which seals off the left side very nicely.

Bill: What does your book say about this White magari? 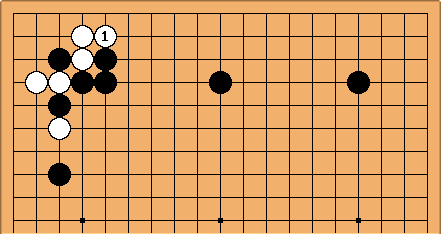 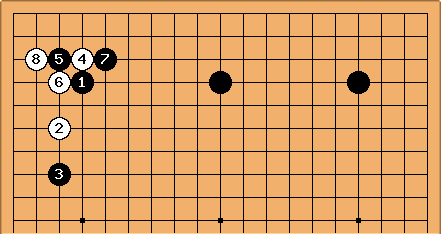 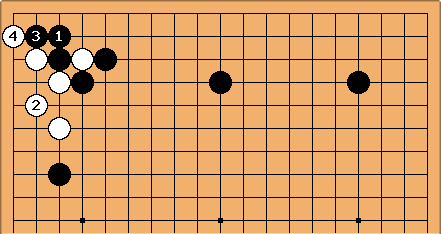 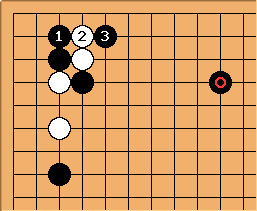 here is a very nice tesuji. I leave the rest as a reading exercise. 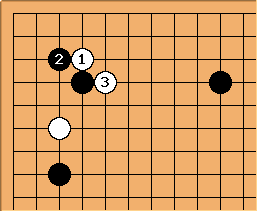 unkx80: I have a question here. How should we answer the hane at 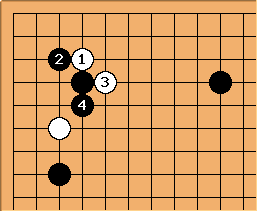 Bill: My first thought is the nobikiri,

. My second and third thought, too.