The left-side fight and White's struggle for points 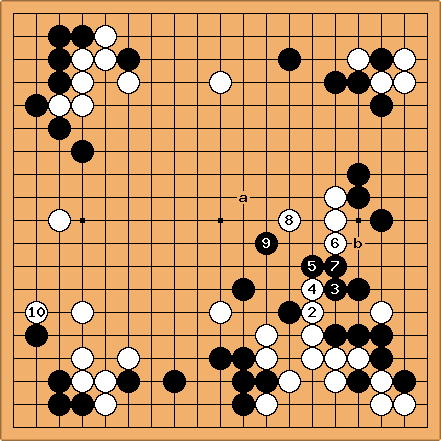 72, 74: White is trying to avoid a black wall here, but in the process her own stones above are weakened. Not good, but I cannot point to a really good move in this part of the board either. White's stones are not co-operating. - AndreEngels

MortenPahle: Is Black 75 an overplay? As I see it, White can cut but it is not dangerous and will create more trouble for White than for Black?

Analysis and discussion at OngoingGameOneWhiteCutAt76.

76: Someone else played 76 on the main board, so I copied it down to the numbered diagram. --FCS

I don't like the move (White 76). It peeps at the point where there is a distant possibility of a cut. It is aji keshi. --HolIgor

I agree. White 76 is a horrible move. She is just making things hard for herself. -- AndreEngels

DaveSigaty: Agreed, she should just jump to 78 and if 79 perhaps keima at a. If Black plays away White has b as a follow-up and either cuts off the black center stones at 77 or pushes into Black's side territory.

MortenPahle -- This is why I was not sure about Black 75 - it seems to leave some bad aji for later.

MortenPahle -- To boldly go where no one's gone before :-)

80: I am aware of that this is a state of a desperate fight for White. I think that in order to win White has to take a lot of risk. If White finishes in sente here it would be a success. -- HolIgor 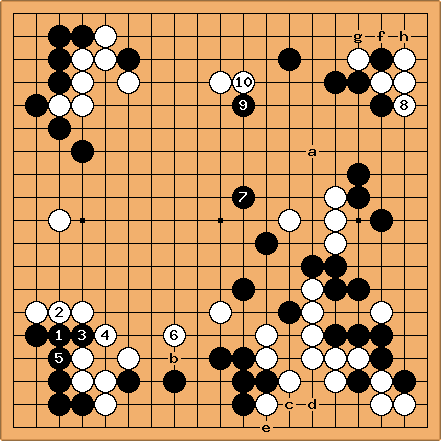 I don't know if playing on the left side was that urgent for White. Playing somewhere around a looks much more urgent to me.

If White has to end in gote with 6 then it can not have been urgent because it was not big enough in territory and at the same time White was not in danger. Was there a more severe play for 6 (such as b) that could have forced Black to settle himself. If White can force Black to play c to live, she will have sente after the d, e exchange to play first in the center or upper right corner. --DaveSigaty

88: This move is large, more than 10 points, and Black could always close off his territory there in sente.

89: Black accepts the challenge! If White can play away after 87 then the center is tiny. Black now claims that it is actually huge and aims to make 30 points by capturing White on a large scale. But I agree with HolIgor that 88 was very large. Before 87 Black should probably have played f and closed the right side with White g, Black 88, White h. This would have strengthened Black at the top and made 87 even more dangerous. --DaveSigaty

90: The center is not small, of course, But then White's group at the top does not look too strong either. 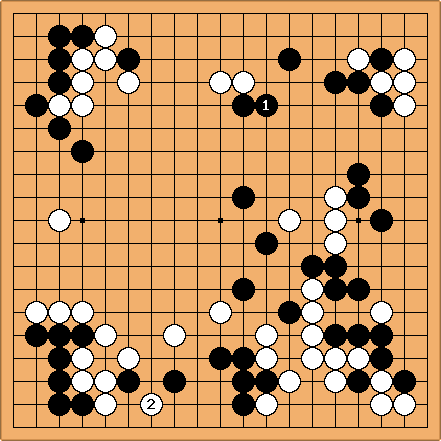 Matt Noonan: I have no idea where to proceed from here. It seems like White needs to have the center group live to have any hope, but how? Is there some sort of sabaki move here? A brilliant tesuji? Is White just Screwed?

HolIgor: I don't see any way to save White's center group. It doesn't even have aji. It is ugly. White is simply losing by 30 points at the moment. I think that after a little bit of tsumego at the bottom, White should resign and start a new game.

Matt Noonan: Since I was partly responsible for that group (added the single stone on move 78), I'm wondering to myself -- where did White go wrong? Was 78 incorrect, or just not followed through with correctly?

HolIgor : Take it easy. I was responsible for many decisions that White made including the decision not to run away with that group.

Andre Engels: No, White 78 was not wrong. I think the final error was White 86; White 80 is playable as a sente move, but she definitely does not have the time to play any gote moves here. However, even if she does play a move to defend the group, she is still behind, mostly because of errors in direction and not being consistent earlier on. White 86 may have been played with the attempt of killing Black with White 92 in mind, but if Black does not die, White will clearly be behind.