The fight for the lower side 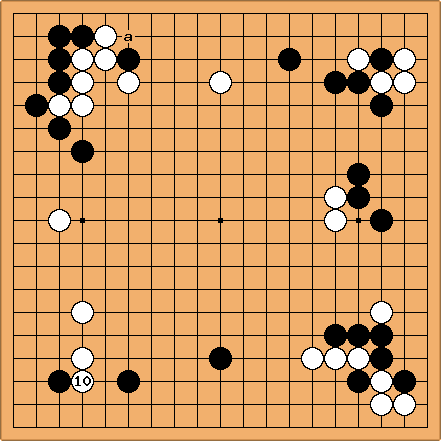 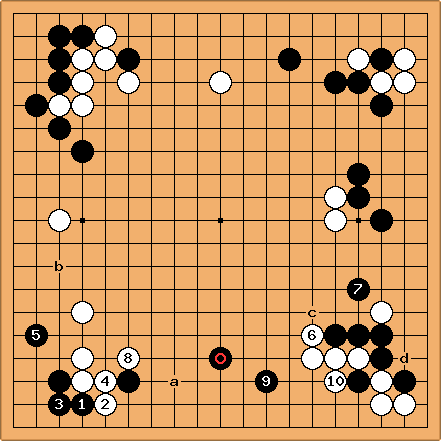 MattNoonan: This seems like the right continuation for White, since letting Black connect underneath to defend the left side still leaves a weakness at b to deal with. On the other hand, now the white group has no eyespace... so how to best take advantage of the thinness of Black's position around a?

ArnoHollosi: 6 seems like the right move, but I feel uneasy about it. White cannot expect to get the lower side - it simply is too wide and the white group on the left side not thick enough. But playing around a and allowing Black to play 6 is even worse. So I guess White just has to play at 6 and go with the flow.

HolIgor: Move 57. I suggest this very defensive move. Playing at c was another possibility, but it seems that White is likely to accumulate a wall anyway. in that case. Playing tenuki seems rather painful.

Seems like everyone is afraid of playing 58 - so I did. I am prepared to be ridiculed :o) Could someone come up with alternative suggestions for 58? --ArnoHollosi, 1d

I think that White a would have been better than 58. White has built thickness facing the lower side in both the lower left and the lower right. The only way to make that work is by attacking the marked black stone; if that lives easily, White's position will be quite bad. White a puts more pressure on Black, I would say. -- AndreEngels (2D Europe)

White 1 here doesn't seem so much better after forcing at 2 Black has the option to continue with 4 here, or force White in a similar way - it's hard to imagine that Black will have much difficulty. With the actual White 58, White reinforces her weaker wall and can now mount an all out attack - I don't think that b can settle easily. --ArnoHollosi

In my opinion, White 3 in your sequence is wrong. In my opinion, in this position, it is better to allow Black to connect underneath and keep building strength, for example with 3 and 5.

59: It seems clear that Black must defend his stone at the lower side at this point, but it is hard to decide between this move and a. Immediately jumping to the center might be a third option. -- AndreEngels (2D Europe)

60: I think this is too timid. White has nothing to fear, after all she still can capture at d any time she wants. Something more aggressive is called for. --ArnoHollosi, 1d 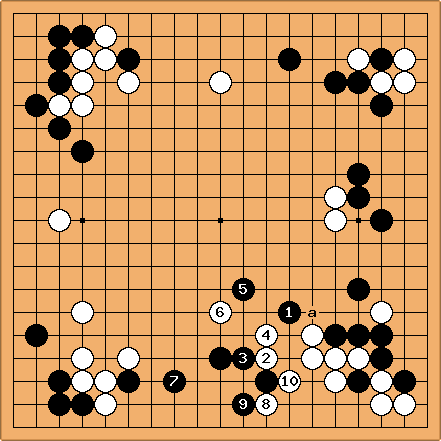 AndreEngels (2D Europe): Black 61 might be intended as a kikashi, forcing White to defend at a, after which Black can run into the center faster. However, it is a bad move in this position. Black can easily run into the center anyway, and also has the possibility of making a base on the side by playing 7. I think Black 7 would be the right thing to do in this position. Exchanging 63 for 64 keeps Black's bottom stones connected, but it is rather painful for Black 61 which is now in a bad position, peeping into a bamboo joint.

68: HolIgor: Not to kill, just to take some space.

69: Attempt to connect 3 to the marked (square) black stone, without allowing White to push under the by playing at 9. (If this is a particularly bad move, I'll take no offence if someone removes it. -FCS) 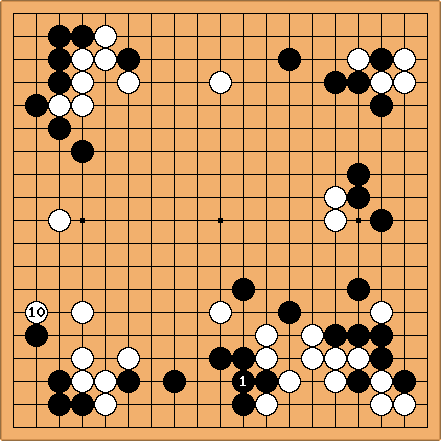 71: I guess connecting is safe as it guarantees life more or less. Maybe it's time to do a count? --ArnoHollosi

HolIgor: Right now Black is practically one side ahead in terms of the firm territory because it is not clear what White has on the upper side and on the left (perhaps nothing). Black is not behind in influence either.