HolIgor: I propose to post here both general impressions and some analysis of moves.

My own impression is that the game was of rather low quality. I should have been expected from a game where participants were of too different level (from 5d to 30k). Long sequences of good moves were reduced to nothing by huge mistakes.

But it was interesting to play, however. At least to me. I was one of the weakest players though.

Brief description of the game as I see it. At the beginning Black used the advantage of the first move well, and obtained apreferable position. To prevent the creation of a black framework on the right White decided to press down Black's position and then take the corner. That was not a very good plan because as a result Black ended up thick and with territory on the right side. White seemed to be behind in territory, but the game was playable. Then, the first big blunder happened. A crude peep that White played on the right killed the potential of White's stones and made the white group heavy. Since I did not like what happened and since I knew that if White tried to save the group, Black would gain a lot by chasing it, endangering all areas of potential white territory, I took the decision to abandon the heavy group. As the result Black's lead became commanding and White was close to resignation.

The only thing left was to try to gain something by attacking Black's bottom group. This group lived, but Black decided to play dangerously and scorned the moment to build a second eye. White stole the eye and started a desperate fight. Black could win the fight, but then again, an awful blunder happened. As the result of a mistake Black was forced to lose the bottom group. The game became more balanced, though everybody believed that Black was still comfortably ahead.

The rest of the game was horrible for Black, though. Black started to play yose moves too soon, allowing White to neutralize Black's influence in the center. A new hope for a fight appeared and White used it nicely.

Do you have any candidates for a move of the game? I propose this move: 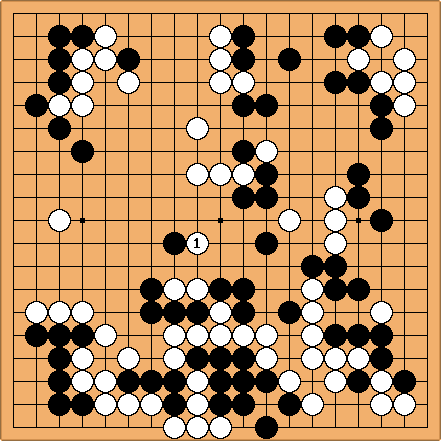 Of course, when it was played I did not like it.

unkx80: The fight in the middle has been very complex. I guess even dan players would have difficulty trying to figure out the final result when 174 was played. This is a game where intuition kept betraying me... I am surprised that I could not find even a satisfactory answer for Black after 174 was played, when I used a computer to play out the moves. Perhaps I'm wrong? Anyway, I propose the following diagram, with moves way back before then... but during the game, how many would have calculated the final result? 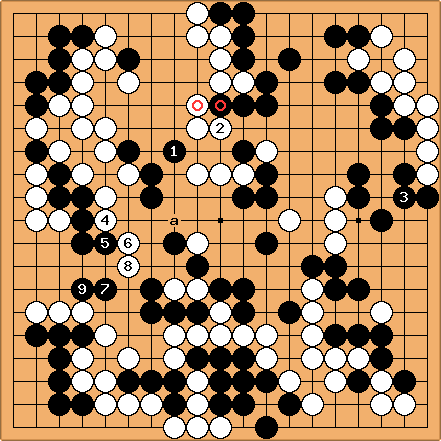 (which is 174), Black must make the exchange of

, Black will respond as normal in the game. When Black plays

, White with a would not be able to capture the central black stones. 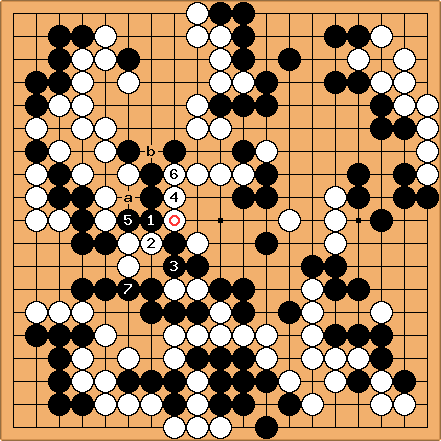 Continuing, Black will then respond with

, and then cutting at

. Black wins the capturing race, as White is caught in shortage of liberties (White can't play at a or b). 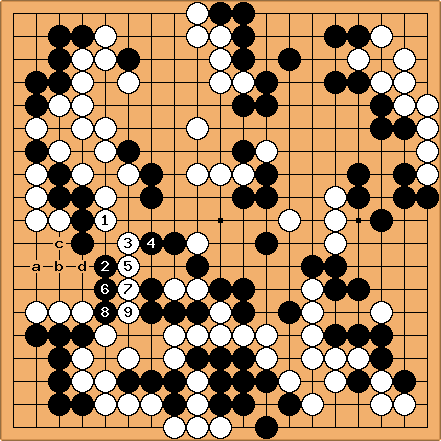 was wrong when I asked the question. The diagonal move at

pushes through; up to 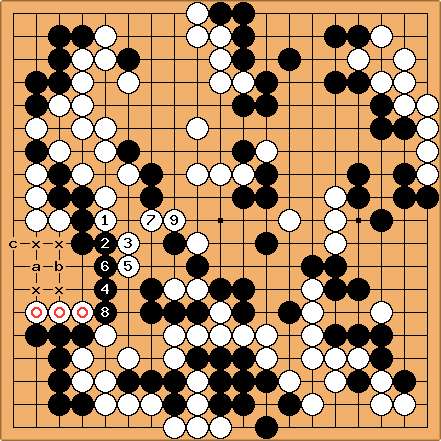 , which is designed to reduce the liberties of

by one. White only needs to play at

, forcing a connection at

captures the three black stones. Very interestingly, Black will have a very tough time trying to capture the

stones. Play at any of the points marked x, and White will connect with a. If Black plays at b, then White will play at c. 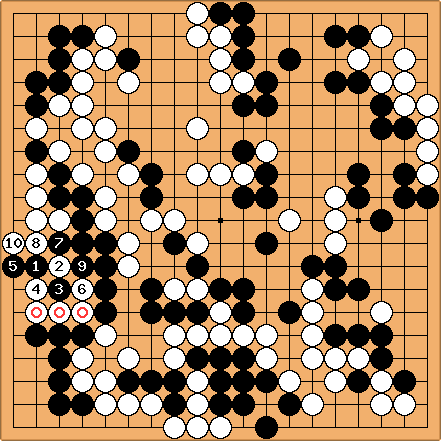 The strongest play is at

. White has a tesuji at

. Black's best move is the wedge at