In Ongoing Game 1 Black 249 is a response to White's one-point sente play. It is obviously large enough to require a response, but it still may be instructive to evaluate it. :-) 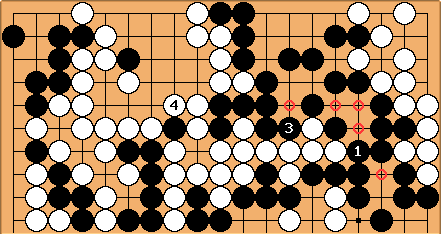 is sente. The five marked points are Black's territory. 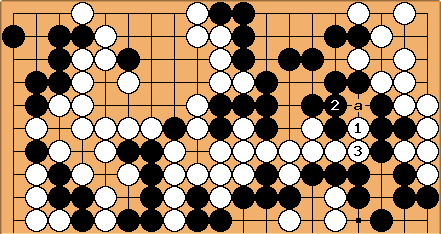 Black can reply at a, making ko. The ko is complicated, but does not seem to gain anything on average, by comparison with simply filling. The worst that Black threatens is to take

, yielding the same result as if Black played first. The only way Black could gain, on average, would be if

, taking the ko, did not threaten much. But it does.
If Black does make the ko with Black a, for White to connect at

is usually inferior. Normally it is better to play elsewhere instead.

Now let's look at the follow-ups. 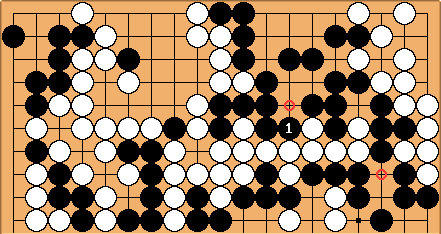 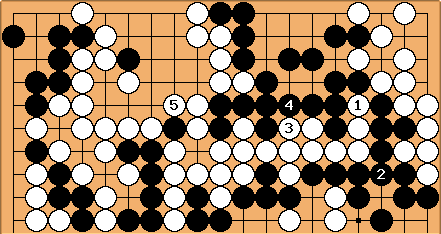 White takes away the rest of the points at stake.

Now we can make a game tree:

We reckon that Black has 1 point of potential territory at B, the average of the result of Black's gote and White's gote. Each gote play from B gains 1 point, so they have a miai value of one point.

Similarly, we reckon that Black has 3 points of potential territory at A, and that a play at A is worth 2 points.

(Note: B is actually ambiguous. Instead of taking gote White can simply play at 3 with sente. Well, sort of sente. The position after White 3 is also ambiguous. None of that affects the value of B, or A.)