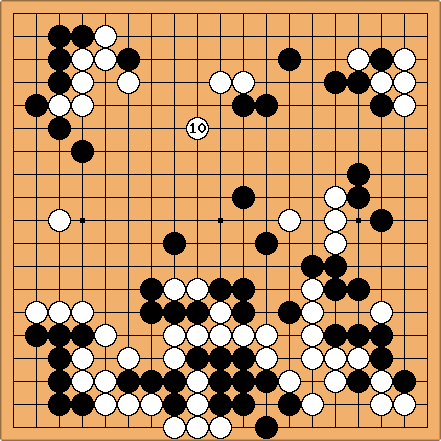 Holigor: 120. White would not like to be sealed in at the top. Small reductions from all sides seems to be the only possible tactics. White should play a little bit thinly, too. 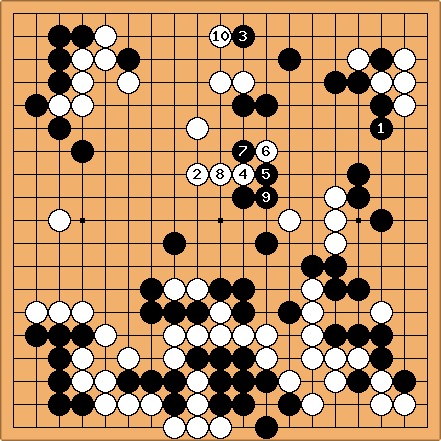 Andre Engels: 123 is a big move. This is almost certainly better than answering in the center. 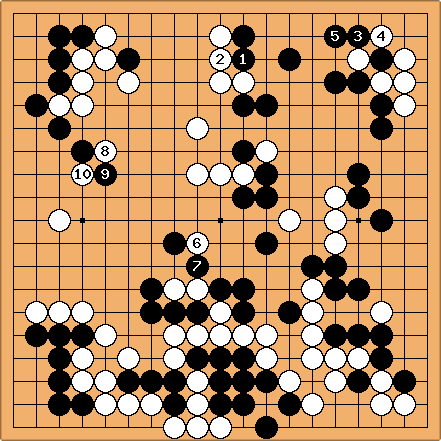 MortenPahle: 136. I'm sorry, but I think White has to do something stronger than just follow Black's yose moves. However, I am not sure whether this is the way to go about it.... (A typical Morten move :-) (See A valid reason for move 136.)

DaveSigaty: I think that 136 is not the best. But I think that it was played from an underestimation of White's position. White has gained a lot in the last few stones as both the upper side and center have become thick. What is the potential here? Can White Win At 136? 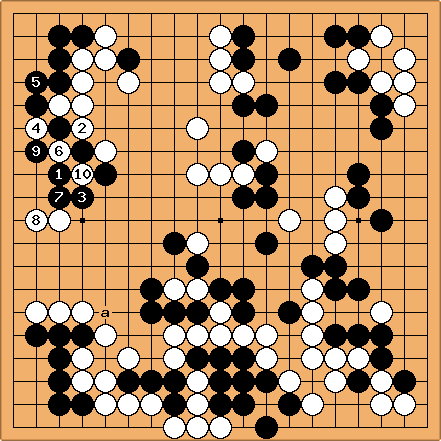 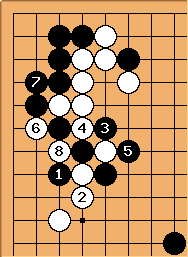 White's calm play at 2 in response to 1 leaves Black on the spot. If Black tries to prevent the top from getting too large with 3 and 5, White plays the combination against the corner and ends up cutting 1 off with a big gain on the left side. Compare this to the shape in the game where Black's ponnuki is much better positioned. White will make more territory at the top but the left side is gone.

HolIgor: (147) Black should not allow White to connect undeneath, in my opinion. DaveSigaty: I think this is an interesting way of looking at it. White needs to worry about the cut at a. 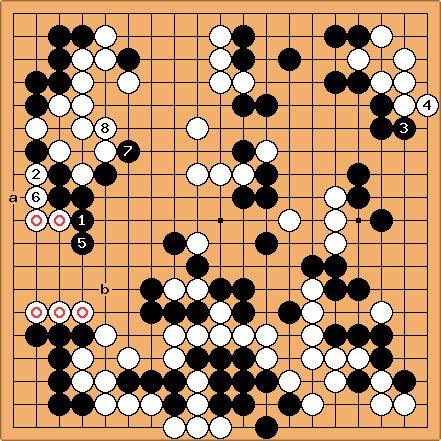 Tim Brent (158) : Though this is a gote move, it is necessary in that if White does not play here, Black will, and White cannot win the ko as Black would take two stones on the first capture. It also protects the eye around E16.

Matt Noonan (155): I assume sente is too important right now for Black to respond to White 154? I think there are larger moves to be made..

Andre Engels: I agree. Black 153 was quite large and sente, but any further moves will be gote, and there are larger moves in other parts of the board.

White ahead in territory, but Black has better endgame objectives. Overall I'd say White slightly ahead.

Move 152: This should resolve the ko, while providing an escape route for the marked stones at either a or b. The black stones are cut, so White keeps the advantage?

Move 151. HolIgor: Interest in the game has strongly fallen. I have to make another move for Black (though I played mostly White in this game). If Black loses, blame me, please. First we lost it for White and then for Black :-(.