The Attack on the Black Lower Side Group 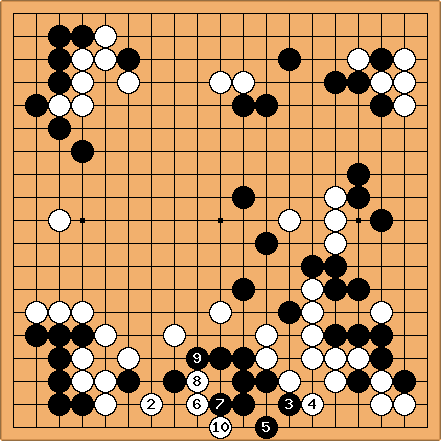 HolIgor: 96. Black's defense was a little more difficult if the kikashi 94 were not played. See Ongoing Game 1 problem.

DaveSigaty: 100. Has Black given White a chance for a comeback? White steals Black's second eye and waits to see whether Black can escape or capture some stones. Black 99 at 100 would have left Black comfortably ahead? 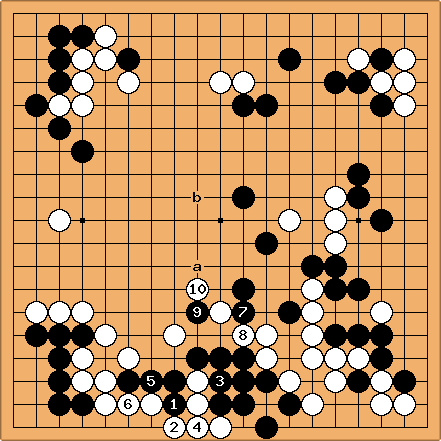 HolIgor: It seems that White 8 does not work. White could at this point take four stones in sente and reduce the score. After all, that was the initial plan of the attack.

Another option was to play a and b; which stops Black's expansion while leaving at least some aji in Black's position.

If Black connects then White 8 in exchange for a black stone in the center is a loss for White. 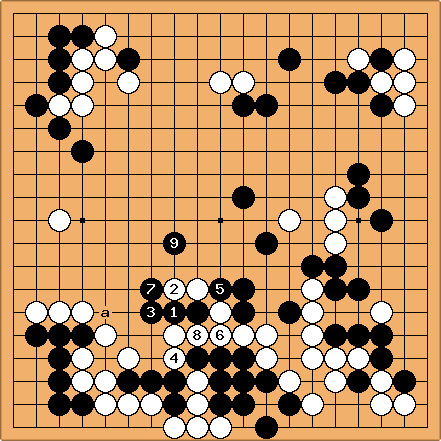 HolIgor: 112. I think that White cannot afford to take four stones (10-12 points) and give up any prospects in the center. Any comments?
DaveSigaty: I think your approach is the most interesting. White needs to capture the stones or cover the cut at a in sente somehow in order to keep some chances here. Andre Engels: Capturing the stones will not be hard: White 114 threatens the cut at 118.

117: I know you are going to think that I am crazy for playing this move and throwing away the black group at the bottom. The way I see it is that Black is way ahead. Sacrificing the group at the bottom currently costs some 25 points. So what? If White next captures the group, Black can make up for his loss in the center where a single move will give him at least another 20 points. I think it's a reasonable choice compared to continuing the fight with yet unknown outcome. What do you think? Proverb: A rich man should not pick quarrels --ArnoHollosi

Andre Engels: Well, I agree with Black 117. Although Black has some possibilities, it is quite likely that he will lose his whole group if he connects. That's too large a risk to take. The source for this problem was with Black 99, which was too opportunistic. Black should just have secured two eyes with a move at 100. Even after White 118, Black is still ahead, but the game has become playable for White.

HolIgor: Black 117 was the best move. If played instead of 115 black could keep the stones alive. If Black connects he is doomed. After 117 Black is still far ahead.

About 99. If Black built two eyes, White had no time to take the profit and Black could be able to connect and capture two stones in yose. That would remain just a big yose move.