Kageyama encourages players -- both in fuseki and yose -- to resist the temptation to defend against an attack, and instead to charge ahead and wage a counter-attack. Do others agree with this? It makes a little more sense to me during yose, because the situations are more drastically different, and you might have more of an advantage there. 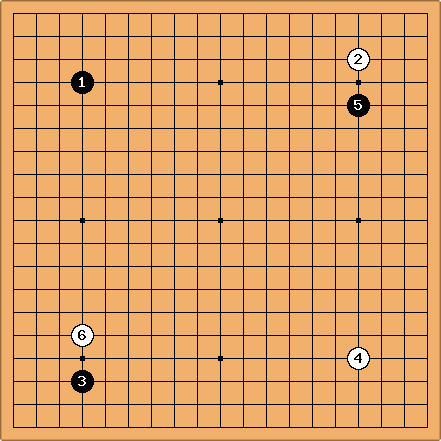 adamzero : While I don't think it applies quite so well at this early a stage in fuseki, I believe it is invaluable advice for late fuseki and chuban (middle game). I think I jumped two stones nearly immediately the day I started chanting "apply the principle of mutual damage" under my breath as a mantra, during the chuban. (For your information, the chant seems to work pretty well if you read it as if it were an iambic hexameter ;-) )

One might be at risk of committing the "Following the Opponent Around" mistake when one does not counter-attack.

Perhaps this isn't a very good example, for it appears to be mirror go (by transposition). Counterattack is important, but in a symmetrical position such as this, one will never be ahead by using the same attack as the opponent. ~srn347