Connecting stones on the second line

A standard way to link stones on the second line that are three points apart is to play kosumi on the first line from either, which is automatically an ogeima from the other. It is crucial that there be no low (2nd line) enemy stones inbetween that would compromise this connection.

White can connect under with either of the moves a or b. The move inbetween will not work.

, black can cut by playing

, sacrificing a stone in order to separate them all from the stones on the right.

Although both moves connect, Sakata points out in Tesuji and Anti-Suji of Go, that b in the first diagram is clearly preferable to a.

The analysis is based on the worst case where White is forced to allow Black to play twice in a row (most likely because of a ko fight). For instance :

The marked white stone is a wasted move.

Now White has not wasted a stone.

We can test that proposition with a difference game. [1] 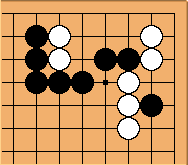 The ogeima may also connect groups four points apart, if one of the groups has a stone on the first line.

Here, the move at a connects white's two stones on the left to her group on the right.

Bill: Using Sakata's example, we can compare connections with a difference game. We have mirrored the positions (adding some stones to make the boundaries clear), and then let Black make the near connection and White make the far connection.

with sente, then plays

Bill: The play when White goes first is a little tricky. If

connects at 4, Black can make jigo. After

Black loses if he yields, so both players make mutual damage. In the end, though, White wins by 1 point.

Bill: The end result appears to be that either connection is OK, and that which is better depends upon the whole board.

Bill: However, White to play can win the difference game because of the crawl at 2. But Black can eliminate that possibility with the reversal through

. The point is that

is not just sente, but moves to a position that is better for Black than the original position. White must continue with

or suffer a loss. Therefore, if the whole board is such that White could gain by the crawl, Black can eliminate that possibility immediately after White plays

Bill: At the same time,

reverses if White starts at 3, as well. That means that the two connections are equivalent in terms of territory, and the only question concerns ko threats. So we are back to what Sakata said. The close connection is better. But this exercise has highlighted the significance of the reversals, and the necessity of playing them, even if it is not as a ko threat.

Herman Hiddema: Doesn't the importance of the white crawl at two depend on the upper left side being white territory? If it is a case like this one, with

connecting to a living group, would a white crawl at 2 still matter?

Bill: Each situation needs to be evaluated on its own, of course. Here a White crawl at 2 takes away Black's sente at 4.