Mirror Go, also commonly referred to by the Japanese term manego, refers to the practice where one player plays each move at a point that "mirrors" his opponent's previous move. The "mirror", in this case, is a

The theory behind Mirror Go is that a move that mirrors the opponent's move can't be worse off. The player doing the mirroring can abort the process when they feel their opponent has made a bad move, giving them an advantage.

In modern games, White is more likely to perform the mirroring as Black is burdened by having to overcome White's komi advantage. In games without komi, it is more viable for Black to play on tengen and then mirror.

For Black to be able to play mirror go, he needs to open on tengen, which removes the only point that cannot be mirrored. From thereon out, Black can mirror moves as long as he sees fit. Black's usual plan will be to carefully assess each white move, and deviate from mirroring when he feels it is a bad move. 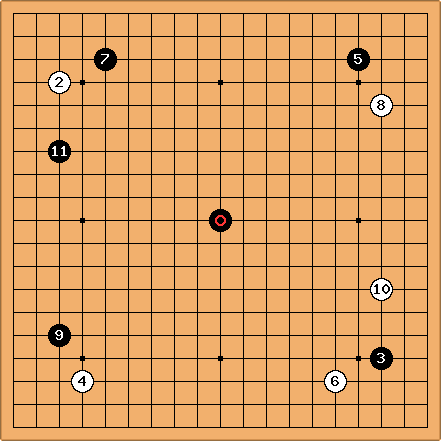 This is the opening of the first game ever played between Go Seigen and Kitani Minoru. Go Seigen opened on tengen with

, then mirrored Kitani's moves until move 64. Go was criticized for this by many commentators, who felt that it made a mockery of the game. For further diagrams and analysis, see Kitani Go First Game.

When Black plays mirror go, it is important whether or not there is komi. With komi, White can comfortably play normal moves, as continued mirroring by Black will lead to a draw on the board, and thus a victory for White with the komi. Without komi, Black's mirroring is more dangerous.

In the first diagram, we can see how mirroring results in bad shape for black. By the second diagram, the tengen stone has been completely neutralized. If black stubbornly keeps mirroring, the result will be disaster. In the third diagram, Black is one move too late, and will lose five stones in the center.

is not usually a viable move to punish mirror go. Black can stop mirroring and attack the white stone immediately, satisfied that his strategy has paid off by compelling White to play a bad move. Instead of playing

immediately, White will generally have to find a strategy where a fight develops toward the center, so that

or similar moves can be played naturally.

After the introduction of komi, mirror go became a more viable strategy for White. The idea being that White tries to keep the game in balance by mirroring, then winning due to the komi. Several professional players have experimented with it, notably Fujisawa Hosai, who played it quite often. 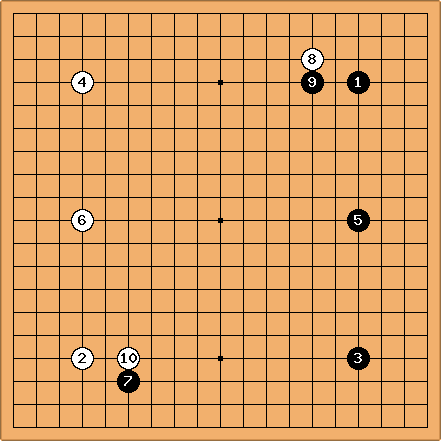 In this game between Fujisawa Hosai and Yamabe Toshiro, Fujisawa played mirror go for 47 moves, deviating from the symmetry on move 48. Fujisawa was notorious for often using mirror go, and was disdained for it by many of his contemporaries. The above game, as well as another one against Yamabe, convinced Fujisawa that mirror go was a flawed strategy. For more analysis of this game, see

Some reflections on mirror go at GoGoD's New in Go

There are several counter strategies that Black can try against White's mirroring strategy. Although such counter strategies normally will work, Black must be careful not to play any obviously bad moves along the way, as that will allow White to deviate from the mirror strategy and take control of the game.

The simplest counter strategy, of course, is for Black to play tengen. It is the only move on the board that White cannot mirror, and White will have to deviate. But this strategy is only viable when tengen is a good move for Black. If it isn't, then Black has played a bad move and White will happily deviate to take control of the game.

A more advanced strategy is to set up opposing ladders. If these ladders run into each other, Black's first move advantage will be decisive. This strategy has been used in professional play several times. An example can be found in this game between Fujisawa Hosai and Sugiuchi Masao.

Other strategies are possible, but all of them generally depend on generating a fight that reaches the centre, where Black's first move advantage can be brought into play decisively. The most extensive discussion of mirror go (also called mimic go or mane-go) in English is probably in the book "9-dan Showdown" by John Fairbairn. This has a long historical discussion but also gives theory and example games, and one separate chapter gives a commentary on a whole game. The games there feature Fujisawa Hosai, who was famous for his persistent attempts to use mirror go. The GoGoD database has over 100 mirror go games, and the GoGoD Encyclopaedia has more details.

Although uncommon, mirror go is certainly not unheard of in professional play. Some players try it once or twice, some even use it regularly. Some examples: